In the days since the downing of MH17 a lot of people have jumped to conclusions prematurely. Evidence provided by the Ukrainian Security Service, combined with the results of social media investigations, suggests the Ukrainian authorities have been less than honest in key disclosures of information to date.

Firstly, condolences to those who have lost their loved ones on MH17. This is a terrible tragedy.

A lot of the media and governments have jumped to conclusions about the responsibility for the downing of the Boeing 777. It is rather distasteful when this happens, particularly as in many cases the primary interest of those making their minds up before a proper investigation is propagandistic. Key principles of propaganda are to try to get your side of the story in first, to repeat lies and half-truths until the they are accepted as truth and to demonize an enemy in order to encourage hatred.

It is to be hoped that the investigation proper will be professionally run and unbiased. Given the geopolitical implications, it is difficult to be very optimistic about that though, having the examples of the Lockerbie investigation and the recent UN/OPCW investigation into Ghouta in mind.

We hope those most concerned, the victims and their families, will learn the truth and also see a measure of justice.

Anyway, having spent some time examining the evidence which has so far come to light, it seems necessary to make a small contribution, to hopefully get a bit closer to the truth and away from the current atmosphere – which most resembles a witch-hunt.

The US has claimed in a statement on the Kiev Embassy web site that: At the time that flight MH17 dropped out of contact, we detected a surface-to-air missile (SAM) launch from a separatist-controlled area in southeastern Ukraine. We believe this missile was an SA-11.

Intercepts of separatist communications posted on YouTube by the Ukrainian government indicate the separatists were in possession of a SA-11 system as early as Monday July 14th. In the intercepts, the separatists made repeated references to having and repositioning Buk (SA-11) systems.

Social media postings on Thursday show an SA-11 system traveling through the separatist-controlled towns of Torez and Snizhne, near the crash site and assessed location of the SAM launch. From this location, the SA-11 has the range and altitude capability to have shot down flight MH17.

The Security Services of Ukraine (SBU) have provided photos and video to the media which they claim show SA-11 buk systems returning to Russia after having brought the plane down.

The photo extract below, showing a buk, has surfaced and has been geolocated to the town of Torez (a town close to the MH17 crash site which has seen conflict between some of the locals and members of Oleg Laschko‘s Battalion of neo-Nazis.)

This photo and a video clip issued by the SBU are being used to suggest that the downing of the MH17 must have been by the “separatists” who then returned the missile system to Russia.

Now, it is too early to determine with certainty who fired the missile and who bears legal responsibility for the tragedy. But it is interesting to note that the below photo, provided to Ukrainian media by the SBU also shows a buk on a similar trailer to the one in Torez. In this photo we can see the serial number of the buk which is 312. 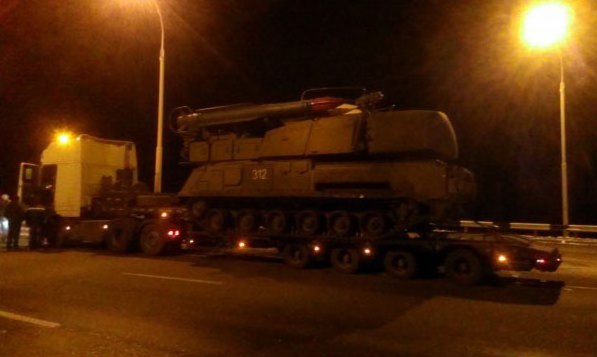 There are a number of sub-plots to this story, including the fact that the Ukrainian Prosecutor-General says that Ukraine has not lost any “buks” to the rebels and, of course, the question of why, if they had, the Ukrainians didn’t close their air space to civilian traffic.

But something particularly interesting is that rather than coming from Russia as Ukraine is claiming, buk number 312 appears to be a Ukrainian buk. The evidence for that is in the video below, uploaded 5th March of this year, where we can see a number of Ukrainian buks all lined up in a place called Horlika (or Gorlovka). The third buk in the line is number 312.

So, it appears that at least one of the buks, which the SBU claim belongs to Russia, is actually Ukrainian.

According to information provided by the Russians, the Ukrainians had 27 Buk MI complexes of the 156th AA missile regiment in the disaster area on 17th of July.

It is essential that the Ukrainians provide a full inventory of all their Buk M1s and precise movements of each of these vehicles – rather than producing pictures of their own vehicles which they hold out as belonging to the rebels – and they should do that immediately.