At the World Social Forum in Salvador de Bahia, thousands of people took to the streets “in the name of democracy”: the women’s movement, Black Lives Matter, Environmentalists, Indigenous People’s Organizations, the Landless Farmers Movement, Youth Organizations, Students, LGBT, among others.

As part of the 13th World Social Forum they marched to the slogan:

The leaders and organizers of the WSF in Salvador, Brazil are in persistent denial;  surely by now they should acknowledge that the WSF venue –including travel expenses– are funded by the same corporate interests which are the object of widespread political and social “RESISTANCE” and dissent.

How convenient. The corporations are funding dissent with a view to controlling dissent and the WSF organizers are complicit.

“The anti-globalization movement is opposed to Wall Street and the Texas oil giants controlled by Rockefeller, et al. Yet the foundations and charities of Ford, Rockefeller et al will generously fund progressive anti-capitalist networks as well as environmentalists (opposed to Wall Street and Big Oil), etc. with a view to ultimately overseeing and shaping their various activities.” (M. C, 2016)

What is this Global Left, does it have a grassroots movement?

It is largely composed of  “Leftist Intellectuals” and “Organizers”. They say they are fighting Neoliberalism.

But their WSF movement is largely “funded by neoliberalism”.

People who participated in the WSF Venue

did not know that “RESIST” GLOBAL CAPITALISM

is funded by “GLOBAL CAPITALISM”.

They have been misled by the WSF organizers.

In other words, while the WSF Resist to Transform logo is meaningful, in practice it is also redundant.

Colonial Reparations were contemplated at the World Social Forum 2018, meeting in Salvador, Brazil

The theme of reparations at the 2018 World Social Forum in Salvador de Bahia was treated in the workshop Repairs to Colonialism, in the World Assembly of Resistance Peoples, Movements and Territories and in the Agora of futures. In these activities participated some hundred people, many of whom representatives of other organizations. It was made a point of the situation on the reparations in recent years trying to identify actions most promising for the future.

To whom should these demands for colonial reparation be addressed?

The corporations and Western governments (“former” colonial powers) which generously funded the WSF Venue as well as the NGO participants are routinely involved in a process of neo-colonial social destruction and plunder of resources, not to mention warfare.

When the WSF was held in Mumbai in 2004, the Indian WSF host committee courageously confronted the WSF organizers and declined support from the Ford Foundation (which is linked to the CIA). This in itself did not modify the WSF’s relationship to the corporate donors. While the Ford Foundation formally withdrew, other foundations positioned themselves together with Tony Blair’s Ministry of Overseas Development.

Making the World Safe for Capitalism

In this regard, the Ford Foundation candidly recognizes its role in the “funding of resistance and dissent”:

“Everything the [Ford] Foundation did could be regarded as “making the World safe for capitalism”, reducing social tensions by helping to comfort the afflicted, provide safety valves for the angry, and improve the functioning of government (McGeorge Bundy, National Security Advisor to Presidents John F. Kennedy and Lyndon Johnson (1961-1966), President of the Ford Foundation, (1966-1979))

Under the banner “Against Militarization and Wars”, the Salvador WSF published an empty declaration:

As parliamentarians and representatives of progressive and internationalist forces  We are concerned by wasting immense resources in the recent global tide of militarization and raising military budgets of a lot of countries worldwide. See the full text here

YES, WARS ARE EXPENSIVE. While “wasted resources” are important, why not mention the names of “the countries” which are threatening World peace (i.e. US, NATO member states, Israel, Saudi Arabia), not to mention the millions of people that have been killed as a result of US-NATO led wars.

THERE IS NO “RESIST” in the above narrative. The text carefully fails to mention the names of the countries (aka US, NATO) which are leading these (imperial) wars of economic conquest and social destruction.

Needless to say the victims of these wars (i.e. Iraq, Syria, Yemen etc) as well as the corporate interests behind these wars are not identified.

RESIST does not apply to the US led wars in Syria, Iraq, Ukraine, Yemen. In fact, it would appear from the program that  the issue of US-NATO led wars is not an object of debate and discussion in the WSF workshops.

The mechanisms of “manufacturing dissent” require a manipulative environment, a process of arm-twisting and subtle co-optation of  a small number of key individuals within “progressive organizations”.  Many leaders of these organizations have in a sense betrayed their grassroots.

What prevails is a mosaic of workshops. The social activists participating in the WSF have been misled. These workshops do not threaten the imperial world order. They constitute a ritual of dissent and resistance.

The mosaic of separate WSF workshops, the relative absence of plenary sessions, the creation of divisions within and between social movements, not to mention the absence of a cohesive and unified platform ultimately serves the interests of  the Wall Street corporate elites who are generously funding the WSF venue.

The unspoken corporate agenda is to “manufacture dissent”.“The limits of dissent” are established by the foundations and governments which finance this multimillion WSF dollar venue.

The workshop mosaic is imposed by those who finance the WSF. The workshops format does not constitute a threat to global capitalism. Quite the opposite.

The Funding of the WSF

This section is largely based on an earlier 2016 article pertaining to the 12th WSF held in Montreal in 2016. The funding arrangements, however, pertaining to the WSF Salvador de Bahia venue are broadly similar, dependent on the same donor entities. .

The WSF is supported by a consortium of corporate foundations under the advisory umbrella of Engaged Donors for Global Equity (EDGE). For further details see Michel Chossudovsky 2016

This organization, which previously went under the name of The Funders Network on Trade and Globalization (FTNG), has played a central role in the funding of successive WSF venues. From the outset in 2001, it had an observer status on the WSF International Council.

In one of its key documents (2012), entitled Funders Network Alliance In Support of Grassroots Organizing and Movement-Building  (link no longer available) EDGE acknowledged its support of social movements which challenge “neoliberal market fundamentalism.” including the World Social Forum, established in 2001:

“From the Zapatista uprising in Chiapas (1994) to the Battle in Seattle (1999) to the creation of the World Social Forum in Porto Alegre (2001), the TINA years of Reagan and Thatcher (There Is No Alternative) have been replaced with the growing conviction that “another world is possible.” Counter-summits, global campaigns and social forums have been crucial spaces to articulate local struggles, share experiences and analyses, develop expertise, and build concrete forms of international solidarity among progressive movements for social, economic and ecological justice.”

But at the same time, there is an obvious contradiction: another world is not possible when the campaign against neoliberalism is financed by an alliance of corporate donors firmly committed to neoliberalism and the US-NATO military agenda.

The limits of social dissent are thereby determined by the “governance structure” of  the WSF, which was tacitly agreed upon with the funding agencies at the outset in 2001.

The WSF has no leaders. All the events are “self-organized”. The structure of debate and activism is part of an an “open space” (See y Francine Mestrum, The World Social Forum and its governance: a multi-headed monster, CADTM, 27 April 2013, http://cadtm.org/The-World-Social-Forum-and-its ).

This compartmentalized structure is an obstacle to the development of a meaningful and articulate mass movement.

How best to control grassroots dissent against global capitalism?

Make sure that their leaders can be easily co-opted and that the rank and file will not develop “forms of international solidarity among progressive movements” (to use EDGE’s own words), which in any meaningful way might undermine the interests of corporate capital.

The mosaic of separate WSF workshops, the relative absence of plenary sessions, the creation of divisions within and between social movements, not to mention the absence of a cohesive and unified platform against the Wall Street corporate elites, against the fake US sponsored “global war on terrorism”, which has been used to justify and US-NATO’s  “humanitarian R2P interventions (Afghanistan, Syria, Iraq, Yemen, Libya, Ukraine, etc).

What ultimately prevails is a ritual of dissent which does not threaten the New World Order. Those who attend the WSF from the grassroots are often misled by their leaders. Activists who do not share the WSF consensus will ultimately be excluded:

“By providing the funding and the policy framework to many concerned and dedicated people working within the non-profit sector, the ruling class is able to co-opt leadership from grassroots communities, … and is able to make the funding, accounting, and evaluation components of the work so time consuming and onerous that social justice work is virtually impossible under these conditions” (Paul Kivel, You Call this Democracy, Who Benefits, Who Pays and Who Really Decides, 2004, p. 122 )

“Another World is Possible” is nonetheless an important concept, which characterizes the struggle of the peoples movements against global capitalism as well as the commitment of thousands of committed activists who are currently participated in the Montreal 2016 WSF.

Activism is being manipulated:  “Another World is Possible”  cannot, however, be achieved under the auspices of the WSF which from the outset was funded by global capitalism and organized in close liaison with its corporate and government donors.

The Edge Board of Directors includes representatives from major foundations and corporate charities including the Charles Leopold Mayer foundation, the Ford Foundation, the American Jewish World Service, the Open Society Foundation, et al. (see below) 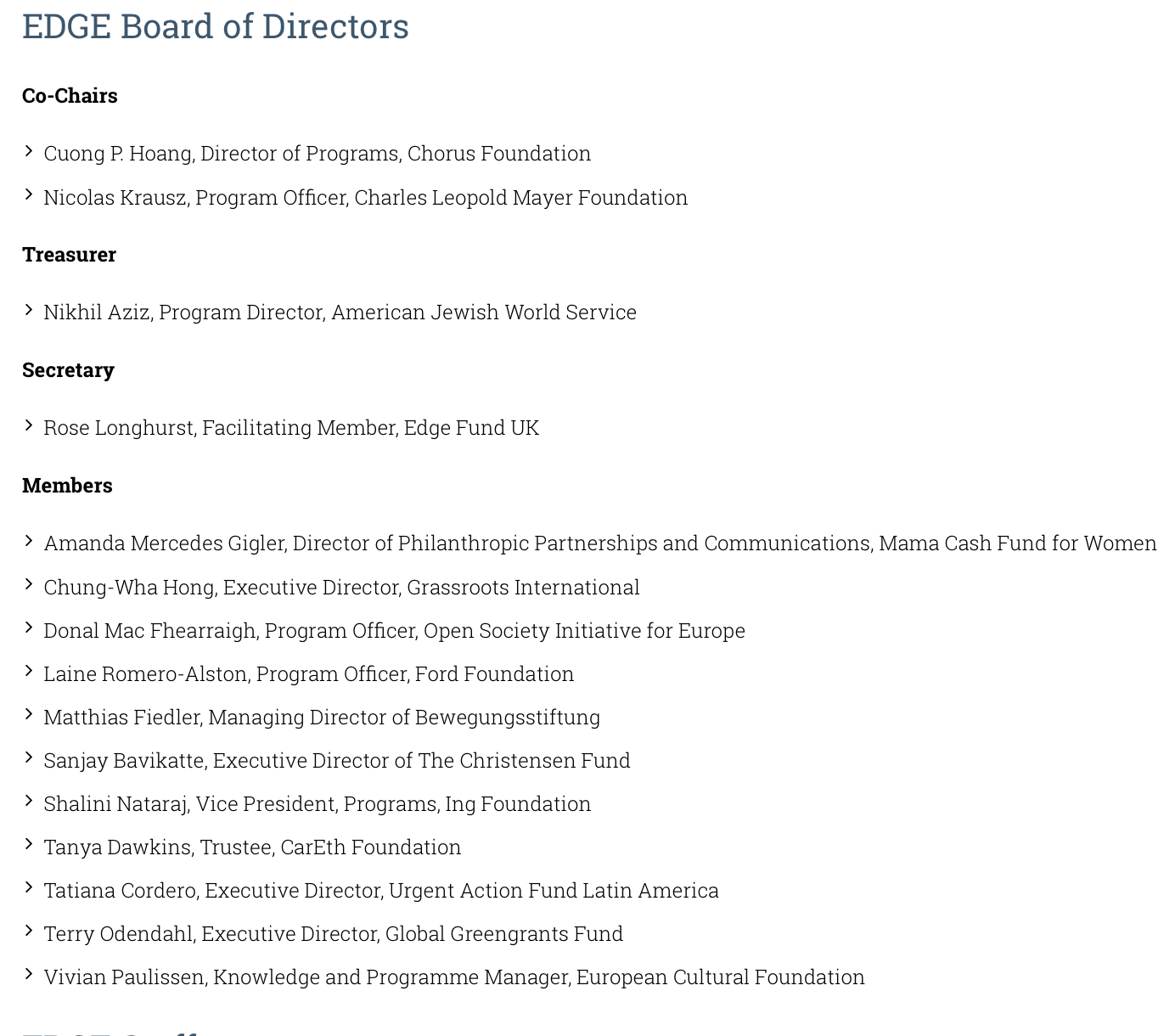 Disclaimer: The contents of this article are of sole responsibility of the author(s). The Centre for Research on Globalization will not be responsible for any inaccurate or incorrect statement in this article.Copyright © Prof Michel Chossudovsky, Global Research, 2018