In response to the reprehensible NBC hit piece we discussed the other day in which Hawaii congresswoman and Democratic presidential candidate Tulsi Gabbard was smeared as a darling of the Russian government, journalist Glenn Greenwald published an article documenting the astonishing amount of journalistic malpractice which went into the piece’s formation. In the article, Greenwald wrote the following:

“That’s because the playbook used by the axis of the Democratic Party, NBC,MSNBC, neocons, and the intelligence community has been, is, and will continue to be a very simple one: to smear any adversary of the establishment wing of the Democratic Party — whether on the left or the right — as a stooge or asset of the Kremlin.”

Displaying a remarkable lack of self-awareness, Democratic establishment pundit and professional Russiagater Caroline Orr responded to Gabbard’s share of this article on Twitter as follows:

This demented McCarthyite mind virus was exemplified even more egregiously in a recent attack on comedian and progressive commentator Jimmy Dore, in which fellow comedian and former Daily Show producer Jena Friedman publicly accused him of being a Kremlin agent just for disagreeing with her. After Dore’s fan base reacted to this deranged smear as any sane person would expect them to, Friedman claimed that this was evidence of a coordinated campaign against her by Russian trolls and bots.

“I wouldn’t doubt it if Jimmy Dore was a Russian asset,” Friedman tweeted in response to Dore’s having criticized her crazed Louise Mensch-esque rantings. “Why else would he drag my name in the mud and misquote me when I said that Russian trolls are fueling the fire and radicalizing people online, which has been in Washington Post. It’s all so insidious. Be careful, friends.”

“The real tell of who the paid assets are is that they all seem to be so coordinated,” Friedman added. “Do you know which of the 999 Dem contenders you are voting for yet? I don’t but if RT and Jimmy Dore and everyone who seems sketchy are pushing for Tusli [sic] Gabbard, it’s hard not to question why?”

“If I question whether someone is on Putin’s payroll and then immediately receive 100+ tweets harassing me as a result, that only proves my point,” Friedman posted in response to the wave of responses her behavior elicited on Twitter, later adding, “There are progressive people fighting with me on here who I am sure are kind (ish) and also bots and assholes using their platforms to troll me in ways that feel oddly suspect. Sorry to question if some guy is paid by Putin but people actually are so why not just say no and move on?”

“I blocked Jimmy Dore because he’s a PizzaGate Putin propaganda valve,” Friedman also said. “Comedians, we need to do a better job at policing our own. Check out his stuff if you don’t believe me & be careful. There are dark forces at play trying to undermine us all & it feels like they‘re winning.”

Gosh. I’m old enough to remember when being a comedian had something to do with comedy.

I blocked Jimmy Dore because he’s a PizzaGate Putin propaganda valve. Comedians, we need to do a better job at policing our own. Check out his stuff if you don’t believe me & be careful. There are dark forces at play trying to undermine us all & it feels like they‘re winning.

The fact that Friedman believed her freakish McCarthyite slander was perfectly healthy, and that her suggestion that a fellow comedian she’d just accused of conducting psyops for a foreign government agency should just “say no and move on” and have that be the end of it, says so much about how pervasively cancerous political discourse has gotten over the last two years.

So let’s talk about that for a minute. Why exactly isn’t it perfectly healthy to accuse everyone who disagrees with you of conducting psyops for a foreign government agency? Why specifically shouldn’t it be standard procedure to level that accusation willy nilly and expect them to just “say no and move on” if it isn’t true? What is it about these McCarthyite accusations that is so destructive and toxic, anyway?

Well, for starters it completely kills political discourse. Absolutely murders it stone dead. If you’re having a political debate with someone, you can disagree very strongly with one another, even get hostile and uncivil at times, and still continue dialoguing and sharing ideas and information with each other. But as soon as one party suggests that the other party is only advancing the ideas and information they’re advancing because they’ve been covertly paid to do so by a foreign government agency, where can the conversation go from there? You’ve slammed the door shut on any further dialogue by preemptively rejecting anything the other party could possibly say, just because you got overwhelmed by the experience of someone having different opinions from your own.

Political discourse is happening all over the world all the time every single day, and far too often it’s cut off from ever getting anywhere because one side can’t resist regurgitating an obnoxious McCarthyite smear they’ve been trained to believe is normal by the Palmer Report and MSNBC. 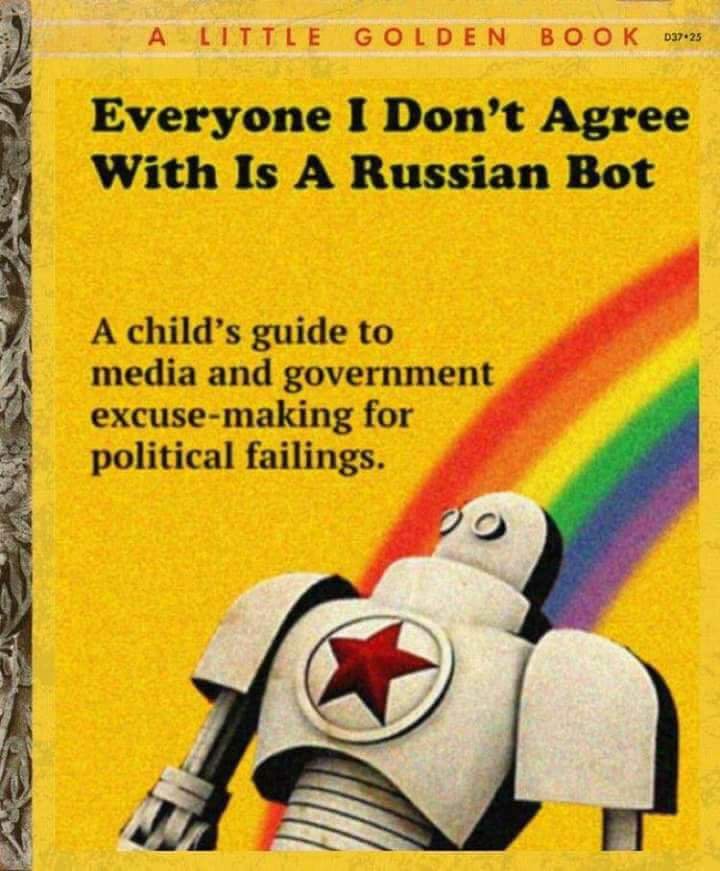 But political discourse is not the only thing that’s harmed by these McCarthyite smears, which seem to be enjoying their biggest resurgence yet as the 2020 presidential race kicks off. The Trump administration is currently pursuing the arrest of Julian Assange, a move which if carried out will constitute a mortal wound for press freedoms around the world, and yet the self-described liberals who claim to support the free press and oppose the Trump administration aren’t saying a peep about it because Assange has been falsely smeared as a Kremlin agent so much it’s now taken as an established fact. Meanwhile political dissidents like Greenwald, Jill Stein, Ron Paul, Abby Martin, Max Blumenthal, Jimmy Dore and so very many others have had the influence of their voices wedged out from mainstream consciousness because so many people have been indoctrinated to reflexively reject their words with a nonsensical accusation of Kremlin fealty.

And that of course is the idea. The normalization of smearing any voice which differs from the orthodoxy of the unipolar world order in any way as a Russian agent has allowed dissenting narratives to be isolated away from the mainstream herd, where they are unable to influence a critical mass of individuals. They aren’t smearing Tulsi Gabbard as a Kremlin asset because they don’t want her to be president; the Democratic Party is still legally capable and structurally willing to rig its primaries to keep her out if need be. The real thing they fear is allowing her anti-interventionist ideas to take hold within the mainstream consciousness of a nation whose nonstop military interventionism is the glue that holds the empire together.

Even if you fully agree with all CIA/CNN talking points and think Joe Biden would be the best president ever, surely you can see that quashing dissent is a bad and undesirable thing? Surely you can see that allowing people free access to ideas and information is the absolutely indispensable foundation that anything resembling democracy must necessarily be built upon? Surely you can recognize that cutting off ideas and information that haven’t been authorized by the current political establishment by smearing dissident voices as agents of a foreign government is already a form of totalitarianism? Surely?

Uhhhhhh can we not? Can we just not do this? Can we not have this be the new normal? Please? https://t.co/3MdfyBsN2c

Meanwhile what benefit comes from accusing someone of being a Kremlin agent? How does that help anything? Even in the extremely unlikely event that you are interacting with someone online who does indeed secretly work for the Russian government, you are still perfectly capable of debating their ideas. Being a secret propagandist doesn’t give someone super powers. It doesn’t give them the ability to control your mind or turn you into a newt. There is no reason whatsoever why you can’t just debate their ideas as you would anyone else’s instead of slamming on the brakes of the conversation to take a pointless million-to-one gamble on a McCarthyite accusation which benefits nobody in any way.

Let’s stop allowing the mass psychosis of these paranoid cold war feeding frenzies to be the new normal, please. If we keep going this way it’s only going to get worse for everyone.