The Nation describes how the U.S. has long funded and manipulated the opposition in Venezuela. The Random Guy™ Juan Guaidó, who claims the presidency, was created through this process:

The piece includes this revealing sentence:

A former USAID/OTI member who helped devise US efforts in Venezuela said the “objective was that you had thousands of youth, high school, and college kids that were horrified of this Indian-looking guy in power. They were idealistic.

Being “horrified” that the “Indian-looking” Hugo Chávez was in power does not seem “idealistic”. One might call it racist though. A number of those white, well off, U.S. trained college kids joint politics in right wing parties. They wanted to take power. But to sell one of theirs as a leader of a country where the majority is mestizo was a problem.

To solve that problem the Random Guy, despite being known only by 20% of Venezuelans, was selected to lead the U.S. coup attempt:

A figure named Juan Andrés Mejía would have been next in line but for reasons that are only now clear, Juan Guaido was selected.

“There is a class reasoning that explains Guaidó’s rise,” Sequera, the Venezuelan analyst, observed. “Mejía is high class, studied at one of the most expensive private universities in Venezuela, and could not be easily marketed to the public the way Guaidó could. For one, Guaidó has common mestizo features like most Venezuelans do, and seems like more like a man of the people.

Guaido is a stand in. He was selected because he somewhat looked like the majority of the people of the country.

The two pictures below further demonstrate the role race plays in the conflict in Venezuela.

Venezuela currently has two assemblies that claim the right to legislate. In 2015 the opposition won a majority in the National Assembly, the original parliament of Venezuela:

However, the Venezuelan Supreme Court barred four lawmakers from taking their seats while it probed allegations of electoral fraud. As a result, only 163 of the 167 lawmakers were sworn in on January 5. The next day, three opposition deputies were sworn in over protests by members from the legislature’s minority who announced their intention to challenge the move.

There is a visual difference between the two assemblies: 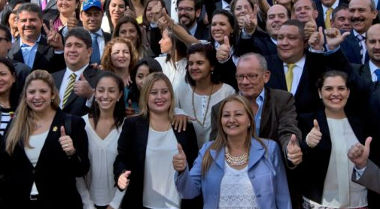 Opposition legislators of the National Assembly 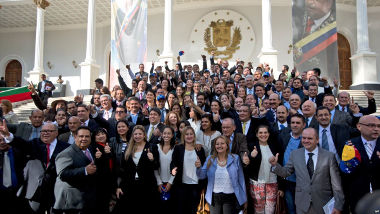 Via VOA – biggerMembers of the Constitutional Assembly 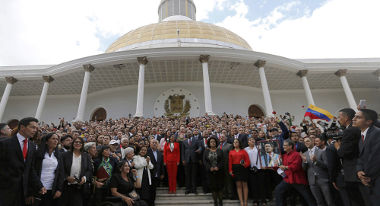 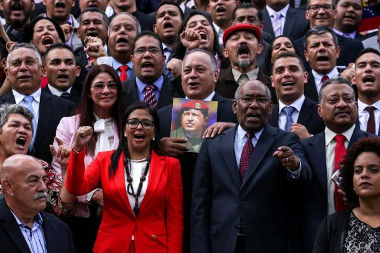 The rich in Venezuela are overwhelming white people. They long ruled the country. The mestizo majority are the poor. Hugo Chavez brought them to power. The white people want the power back.

This obvious racist aspect of the conflict is missing from the general reporting of the issue. It only comes to light in the published visuals.

The race conflict is of course not unique to Venezuela. In the U.S., especially under Trump, racism is also prevalent. It is, I believe, the subliminal reason why the U.S. ruling class is joint in the effort to regime change Venezuela.

One thought on “Racism And The Fight Over Venezuela”