Richard Haass is the president of the Council of Foreign Relations. On Friday, before the failed delivery of fake “humanitarian aid” to Venezuela, he opined that the rejection of the “aid” would justify an intervention based on the dubious doctrine of a Responsibility to Protect (R2P):

What the Maduro regime is doing to the people of Venezuela is inconsistent with the obligations that come with being a sovereign state. The time has come for the UN or OAS or Lima Group to consider how to apply the Responsibility to Protect (R2P) doctrine. 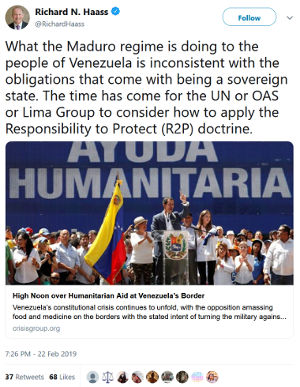 Haass attached a link to a report by the Crisis Group which summarized the situation at that time:

Attaching the Crisis Group piece is an apt display of the utter stupidity of Richard Haass. That’s because the report completely contradicts his argument. The principle of the Responsibility to Protect ..

The Crisis Group report argues, quite correctly, that the Venezuelan government is legally justified to reject the “aid”. Thus R2P, which presuppose that a state does not fulfill is legal obligations, can not apply to the case:

Under international law, governments must give consent to the distribution of food and medical supplies when a population’s survival is threatened,

but only if the aid is of an exclusively humanitarian and impartial nature. This aid operation, however, is primarily political, in that it is intended to undermine Maduro and bring about a change of government.

The acts of the Venezuelan government were fully consistent with “the obligations that come with being a sovereign state”.

To recommend a legal procedure and policy by linking to a report that contradicts that reasoning is quite daft.

Furthermore Haass wants “the UN or OAS or Lima Group to consider how to apply the Responsibility to Protect”.

But neither the Organisation of American States nor the Lima Group, a Canadian plot together with some Central and South American states to attack Venezuela, can apply R2P beyond the already taken sanction measures:

The Responsibility to Protect provides a framework for employing measures that already exist (i.e., mediation, early warning mechanisms, economic sanctions, and chapter VII powers) to prevent atrocity crimes and to protect civilians from their occurrence.

The authority to employ the use of force under the framework of the Responsibility to Protect rests solely with United Nations Security Council and is considered a measure of last resort.

The UNSC will of course reject any U.S. attempt to apply R2P with regards to Venezuela.

The only and last time that the Security Council passed a chapter VII resolution based on R2P was with regards to Libya. The resolution allowed other states to protect the civilian population of Libya by force. The U.S. and others abused the resolution to overthrow the Libyan government and to completely destroyed the country. China and Russia certainly noted that. They will never again let such a resolution pass.

That Senator Marco Rubio, a driving power behind the campaign against Venezuela, explicitly posted these pictures of Muhammad Ghaddafi before and after R2P was applied, only strengthens the case against it. 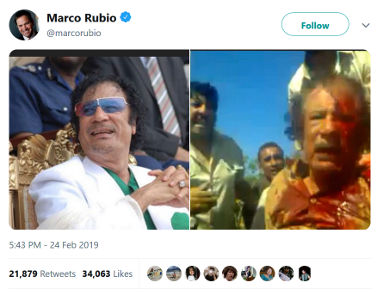