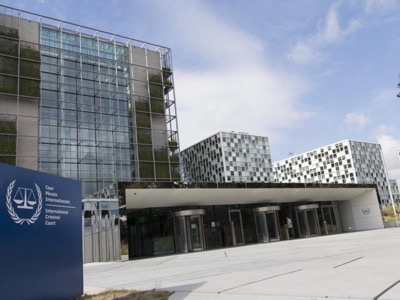 In 1998, the United Nations convened the Conference of Rome, which created the International Criminal Court (ICC). Of course, the aim was not to to create a super-Tribunal which would legislate, on behalf of the member-states, in the name of humanity, but to possess a tool capable of judging criminals at the end of a war, when the institutions of the vanquished are diminished or destroyed.

Thus the statutes of the Court emphasise that it may only accept a case with the agreement of the local Justice system. But these same statutes also state

as well as a crime committed by anyone, anywhere, as long as it is handled by the Security Council of the United Nations.

In both cases, the Rome Statute, developed within the UNO and signed by a few States, may apply to all States, even that of non-members.

This why the three greatest world States – China, the United States and Russia – refused to ratify it. They saw in it – quite rightly – a violation of the principle of sovereignty, formulated in the 18th century by the legal expert Emer de Vattel, and voted into action by the 1969 Vienna Convention on the Law of Treaties [1].

Last September, the ICC declared admissible a complaint against the authorities of Myanmar, despite the fact that it is a non-member, because it was said to have committed atrocities which provoked the exodus of the Rohingyas. The Court considered itself competent because the victims fled to Bangladesh, which is a signatory of the Rome Statute [2].

On this model, a family of the Muslim Brotherhood recently filed a complaint against President Bachar el-Assad and the Syrian representatives, although the Syrian Arab Republic is not a member of the Court. The family claims to have witnessed various atrocities and was obliged to flee to Jordan. The Court would have to ignore the fact that the Muslim Brotherhood is the heart of Islamist terrorism and that it is listed as a terrorist organisation in many countries. Logically, though, it could declare itself competent, since Jordan is a signatory of the Rome Statute.

However, on 22 May 2014, when the Western powers and their Gulf allies sought to engage the ICC via the Security Council in the context of the events in Syria, both China and Russia exercised their veto [3].

However, it makes no difference – the Court has acquired autonomy. It no longer pretends to help states render Justice, but has proclaimed itself the defender of humanity against states.

It is important to understand what is happening – over the last few years, the ICC has mainly been financed by the European Union, and has drawn up its own Code. Until 2016, it tried only African defendants under its own laws, and found them all guilty [4]. After a vote by its Parliament, Burundi then decided to withdraw from the Rome Statute, on the motive that the ICC had become « an instrument of pressure on the governments of poor countries, or a means of destabilising them according to the desires of the great powers ». Three other states then followed – Gambia, the Philippines and South Africa. However, South Africa and Gambia changed their minds after Gambian Fatou Bensouda was named as the new Prosecutor General for the Court.

Nonetheless, until the nomination of Madame Bensouda, the ICC offered none of the guarantees expected from an impartial legal system. Thus, during NATO’s attack on Libya in violation of the Security Council’s mandate, the « proof » tabled by the General Prosecutor, Argentinian Luis Moreno Ocampo, against Mouamar Kadhafi, his son Saïf el Islam and his brother-in-law Abdallah Al-Senoussi, was limited entirely to Press cuttings from the invading states. Worse – when NATO bombed Tripoli, the prosecutor declared that Saïf el-Islam Kadhafi had been arrested by the Western powers and that his bureau was organising his deferment to The Hague. By doing so, he was guilty of a bare-faced lie, and demoralised the Libyans to the point where they no longer resisted the aggression of NATO. In reality, Saïf el-Islam was safe and sound in the cellars of the Hotel Rixos, where I was myself.

The same Luis Moreno Ocampo raped a female journalist in his Court office, but escaped Justice only by his immunity as an international prosecutor [5]. Corrupt, he demanded secret payments for prosecuting individuals who were marked for elimination [6]. The Prosecutor’s secret bank accounts were later revealed by journalistic investigations in Panama and the Virgin Islands [7]. Luis Moreno Ocampo has never had to answer to these charges.

Certainly, his successor, Fatou Bensouda, is more presentable. But the structure has not changed. The magistrates of the Court are so aware of this that on 15 January 2019, they revolted and acquitted Laurent Gbagbo and Charles Ble Goude – two defendants whose alleged « crimes against humanity » had served to justify the « régime change » imposed by France in the Ivory Coast. It was the first time that the ICC abandoned the political role with which the Europeans had tasked them.

On 29 July 2015, the Western powers attempted to pass a resolution at the Security Council intended to divest the Ukrainian Justice of the destruction of flight MH17 and transfer the affair to the ICC. This was a strategy aimed at preparing the indictment of President Vladimir Putin, although Russia is not a signatory of the Rome Statute. The question here is not to determine who destroyed the plane, but to observe the political manipulation operated by the international penal Justice system. Russia exercised its veto against the Western resolution.

The Syrian President, Bachar el-Assad, will therefore probably be tried in absentia by the ICC. He will appear in abstensia with other Syrian representatives whose names have not yet been released. He is used to this. In 2005, he was accused of ordering the assassination of ex-Lebanese Prime Minister Rafic Hariri, this time with the complicity of Lebanese President Emile Lahoud. An international enquiry was led by a German/ Israeli team [8]. Then a pseudo-tribunal was created on the initiative of the US ambassador US to Beirut, Jeffrey Feltman. A treaty was signed by General Secretary of the UNO – with the approbation of the Security Council – and by the new Lebanese Prime Minister – without the authorisation of either the government or the Parliament.

At that time, the West had persuaded itself of the guilt of the accused. Alas! After a year of sensational accusations, Prosecutor Detlev Mehlis resigned in the midst of a shattering scandal – the witnesses on whom he relied were imposters paid by his friends. The Special Tribunal for Lebanon pursued its malicious work by accusing Hezbollah this time, although this organisation published recordings of an Israëli drone over the site of the assassination. The Tribunal persisted in pretending that Rafic Hariri had been killed by the explosion of a van, despite the fact that the forensic records were formal – this was impossible [9]. They spent millions of dollars reproducing the scene and attempting to validate their theory, but in vain. They are therefore working on a thesis that everyone knows is false.

The Syrian Arab Republic fought for eight years in order to preserve its sovereignty. It should therefore not allow its representatives to go to The Hague. But it can still contest the validity of the procedure.

It was initiated by the British lawyer for the plaintiffs, Rodney Dixon, known for also being the lawyer for Qatar against Saudi Arabia and the United Arab Emirates. He had a long experience of « international Justice » since he had been one of the councillors for Canadian Louise Arbour, the General Prosecutor for international Justice for ex-Yugoslavia and Rwanda – two institutions which failed to find the truth about the crimes with which they were tasked.

Mr. Dixon had already declared that he intended to pursue the Syrian leaders for « crimes against humanity ». He based his case on the Caesar Report [10]; a document made public by Qatar, via the London cabinet Carter-Ruck, on 20 January 2014, two days before the peace negotiations of Geneva 2. The report was a collection of 55,000 photographs of torture victims taken by a photographer of the Syrian Arab Army. According to the accusation, they represented the victims of the « régime », while according to the Syrian government, they were on the contrary photos of the the victims of the jihadists. The report was authenticated against Syria by three international prosecutors with a shameful past, since they had worked at the Special Court for Sierra Leone and the Penal Tribunal for ex-Yugoslavia.

Sir Desmond Lorenz de Silva is the author of a report ordered by the British Prime Minister concerning the death of an Irish lawyer, qualified as « shameful » by the victim’s family. He recognised the responsibility of the authorities, which no-one could hide any longer, but blurred the proof against the Crown.

Sir Geoffrey Nice made himself famous by pursuing Slobodan Milošević for two years, without ever managing to find the slightest proof of crimes against humanity. The trial ended with the death of the prisoner, who, according to Russia, was assassinated in prison.

David M. Crane is an ex-representative of the CIA and the DIA who, since the beginning of the war against Syria, has been running a programme designed to drag Bachar el-Assad in front of any special international court at all for any reason at all.

In September 2012, the US State Department, on an idea by ambassador Jeffrey Feltman who had become an assistant to the Secretary of State, created an association, the Syria Justice and Accountability Centre (SJAC), tasked with collecting proof of the crimes of the Syrian government. He financed it to the tune of 5 million dollars annually, the rest being at the charge of the « Friends of Syria », especially Morocco. Two years later, Washington ended their use of this tool. However, ambassador Jeffrey Feltman, who had since become the Director of Political Affairs for the UNO, relaunched the SJAC, this time with European funds.

There exists no control of the ICC, even when its general prosecutor is a corrupt criminal. The Court is reserved exclusively for the service of those who pay for it – the European Union.

In the past, war was considered as a means of conquest or defence. Today, on the contrary, we like to pretend that it is an illegal act in itself, even in legitimate defence. Thus, the party that decides on war must not declare it, but establish the proof a posteriori that by committing the crime of war, it is defending Good. Which the victor can always claim.