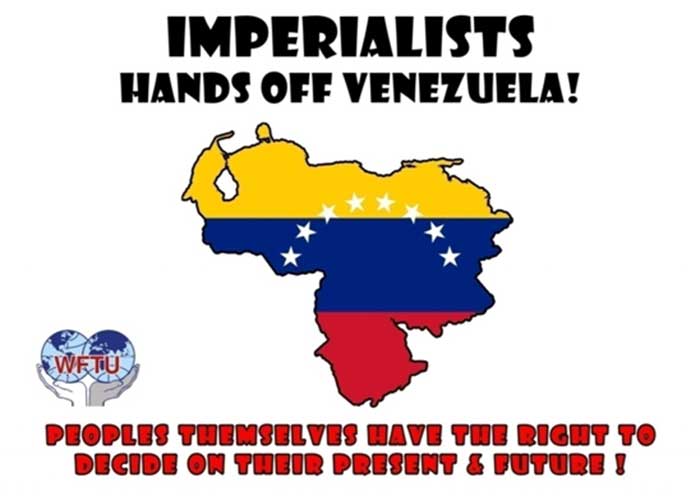 Imperialism is overwhelming the Venezuela situation with threats while Venezuela, the Bolivarian republic, is moving along the path appropriate to face imperialist intervention.

Russians will pay a price: US threatens Russia over Venezuela

Elliott Abrams, the U.S. Special Representative for Venezuela, announced on March 29 that Mike Pompeo, the U.S. Secretary of State, would soon come up with a response to last week’s arrival of Russian military planes in Venezuela.

John Bolton, the US president’s National Security Advisor, has warned countries “external to the Western Hemisphere” against deploying military forces in Venezuela or “elsewhere in the Hemisphere” in a statement made on March 29.

He further underscored that the US would consider such military deployments to be provocations and “a direct threat to international peace and security in the region”.

“We strongly caution actors external to the Western Hemisphere against deploying military assets to Venezuela, or elsewhere in the Hemisphere, with the intent of establishing or expanding military operations”, he said.

He also accused Venezuela’s President Nicolas Maduro of trying to remain in power by using “Russian military personnel and equipment”.

Bolton further said that the US vows to continue protecting its interests in the Western Hemisphere.

Earlier, the White House criticized the arrival of Russian military aircraft in Caracas, with Vice President Mike Pence calling it an “unwelcome provocation”.

US President Donald Trump, in turn, demanded that Russia “get out” of Venezuela, while at the same time did not exclude the use of military force by the US in the country.

Jorge Arreaza, the Venezuelan Foreign Minister, suggested that Bolton should focus in his actual responsibilities, namely “ensuring US security”, and not spend his time trying to intervene in Venezuela’s “domestic matters”.

“Do the right thing”, Venezuelan defense minister responds to Bolton’s calls to defect

US National Security Advisor John Bolton has been flooding Venezuelan Defense Minister Vladimir Padrino with messages asking him to “do the right thing”.

Bolton’s most recent “do the right thing” tweet implores Padrino and the army to “protect the Constitutional order from Maduro’s usurpation of democracy” – though US special envoy Elliott Abrams admitted earlier this month that Juan Guaido’s self-appointed presidency was technically in violation of Venezuela’s constitution, until he unilaterally opted to change it.

Bolton has been tweeting at Padrino all week – and those are just the messages he’s sent publicly.

The Venezuelan military’s refusal to throw its support behind Juan Guaido, the U.S.-backed self-appointed “interim president”, is clearly a thorn in his side.

“We call on the Venezuelan military to uphold its constitutional duty to protect the citizens of Venezuela,” tweeted Bolton.

In the tweeted he also “cautioned” “actors external to Western Hemisphere” – mostly Russia – to cease their “provocative actions”.

Padrino, however, denounced Guaido as “a self-proclaimed outlaw”.

“We, the soldiers of the Motherland, do not accept the president imposed in the shadow of dark interests”, he said.

The US State Department in a statement suggested that the Russian military planes that arrived in Venezuela had brought specialists tasked with restoring the S-300 air defense systems to operation.

“One of the things they are doing seems to be, and we thought this from the very beginning, helping the regime with the S-300 ground-to-air missile system, which apparently got all screwed up by the blackout”, he said.

Venezuelan Defense Minister Vladimir Padrino Lopez underscored on Friday: “It is no secret to anyone that our country has been maintaining military and technical collaboration with Russia since 2001, but when they [Russia’s representatives] paid a visit to Venezuela, a scandal occurred. No one should worry about our bilateral cooperation,” Lopez was quoted by the Venezuelan Defense Ministry as saying.

He pointed out that no one is expressing concern about the ever-increasing activity of the US military near the Venezuelan border.

“There is no sign of scandal when US military aircraft land in Cucuta [Colombia] or when electronic surveillance of the US Air Force around our territory increases 800 percent. Nobody speaks out when there are attempts to undermine Venezuela’s sovereignty,” Lopez noted.

China delivered 65 tons of medicine and supplies Thursday as a result of a strategic cooperation between the two countries. The delivery of aid is one of many, according to government officials.

Tareck El Aissami, Venezuela’s Minister of Industry and National Production stressed the importance of the delivery as an exercise of sovereignty and added that “the aggression Venezuela has experienced, the terrorist acts, the blockade and the financial persecution are unprecedented anywhere in the world.”

The Chinese Ambassador to Venezuela also reiterated the South American nation as an “integral strategic partner and friend,” stressing his conviction “that the Venezuelan people are capable of keeping the peace.”

The statement came shortly after the U.S. has repeatedly threatened the Russian Federation and other nations over their military support for Venezuela.

The U.S. has asked European and other countries to increase the pressure and impose additional sanctions on the Maduro government, Elliott Abrams said on Thursday.

“We have asked governments in Europe and other places to review this question and to impose more sanctions,” Abrams said. “In some cases, to look also at visas for representatives of the Maduro regime. And I hope more governments will pursue that line of activity.”

Abrams added that the U.S. will continue to support Guaido for as long as it takes.

US warns Turkey to halt its support for Maduro

Turkey is failing to heed US requests to halt its support for Venezuelan President Nicolás Maduro, Elliott Abrams has warned, the Financial Times reported on Thursday.

Elliott Abrams told reporters on Thursday that the government of Recep Tayyip Erdoğan, the Turkish president, was “strongly supporting the Maduro regime” and that US officials had “not had the cooperation from Turkey that we want.”

The Turkish President has urged Maduro to “stand up tall”.

The Turkish President has described the U.S. efforts to force him from power as a “coup attempt”.

Erdogan’s stance on Venezuela has become a new flashpoint in the already strained relationship between Turkey and the U.S.

Turkey imports gold from Venezuela, which is concerning for the U.S.

Abrams did not comment on possible consequences for Turkey if the country fails to comply with U.S. demands.

US successful in persuading firms, states not to buy oil from Venezuela, says Abrams

Abrams told reporters that the U.S. has been successful in persuading countries to decrease to their oil purchases from Venezuela.

“I think we’ve had a fair amount of success, I would say in getting companies to reduce the amount they are buying, in some cases end the purchase of oil from the regime,” said Abrams.

The Special Envoy pointed out that the US government engaged in conversations with foreign government and oil traders and told them to extend support to Guaido by buying Venezuelan oil and thus providing it with cash.

According to the White House’ forecast, PdVSA, the Venezuelan state oil company, might lose another $11 billion in oil supplies. In addition, the US introduced a ban on making deals with the company.

Due to US-imposed sanctions, Venezuela’s overall exports of crude oil and fuel dropped to 920,000 barrels per day in the first month of sanctions, roughly 30 percent less than 1.5 million bpd in the prior three months, according to Refinitiv Eikon and state firm PdVSA data.

Venezuela asked the U.N. Security Council to categorically reject the use of terrorist practices against government institutions.

Venezuelan Ambassador to the UN Samuel Moncada denounced Thursday the terrorist attacks against the National Electric System before the U.N. Security Council.

“Terrorist activities against Venezuela are planned, instigated, executed and financed, with resources that have been stolen from the nation as part of a campaign of aggression that supported by foreign powers, whose policies and practices represent a threat to world peace and security,” said Moncada in an open debate of the Security Council on preventing and combating the financing of terrorism.

There is no good terrorism. In Venezuela, there is terrorism promoted and protected by foreign powers, today we denounce these criminal actions before the Security Council and we demand the effective action of the organism responsible for international peace and security.

According to the Venezuelan Foreign Minister, in the last two years, the Venezuelan fascist opposition has perpetrated more than 250 attacks on the National Electric System.

Moncada asked the UN Security Council to categorically reject the use of terrorist practices against government institutions.

Venezuela to armor its electric system

President Maduro called on all to protect the national energetic system.

The President, in a message published on Twitter on Friday, considered the fire at the Simon Bolivar hydroelectric plant as the worst aggression against energy generation and distribution in the country.

Later, Maduro called on government leaders to strengthen communication with the bases in the midst of the recovery from sabotage.

“Let’s keep the people informed, let’s use all available alternative and conventional means to explain well the effects and consequences of the perverse attack”, he said in the social media.

The organization has pledged to deepen cooperation with Caracas.

The opening of a helicopter flight-training centre in Venezuela will allow Caracas to offer pilot training programs to other countries that operate Russian-made Mi-family helicopters, the Venezuelan Defense Ministry said.

“Venezuela will be the only country on the continent possessing these latest generation technologies in the field of aeronautics, which will allow us to offer training programs to other countries that operate Mi helicopters,” the ministry said.

The center was built under the contract between Rosoboronexport and Venezuelan defense company CAVIM.

“This is part of the cooperation of equal strategic partners — Russia and Venezuela. There is no such center in any part of the world,” Venezuelan Defense Minister Padrino Lopez said as quoted in the statement.

The International Federation of the Red Cross and Red Crescent Societies said on Friday it was prepared to channel humanitarian aid to Venezuela through an operation that could be similar to one in Syria, potentially helping ease chronic hunger and disease in the South American nation.

The involvement of the IFRC could signal that Maduro’s government may allow in much-needed food and medicine.

The IFRC within 15 days could begin providing assistance, and expects that it will initially be able to help 650,000 of the neediest citizens in the country of around 30 million inhabitants.

While the company said it was committed to reestablishing service “when the conditions are right,’’ it didn’t provide an estimate of when flights would restart.

The decision cuts off the last remaining flights to Venezuela by a major U.S. carrier.