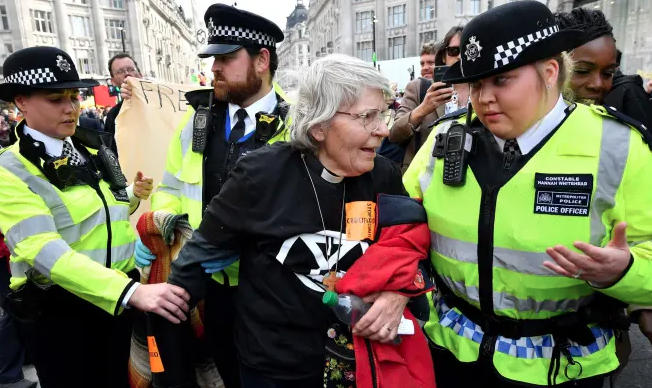 By Ian Browne– advice and information officer at Liberty: Unless you’ve stayed away from all forms of news and social media recently, you’re probably aware that hundreds of people have taken to the streets for multiple simultaneous climate change protests.

It has been reported that many members of the Extinction Rebellion activist group actually hope to be arrested for their acts of civil disobedience – and more than a thousand people have been in the past few days.

If you’re taking part in a protest it’s worth knowing your rights – whether or not you are arrested.

Your right to protest is protected by the European Convention on Human Rights under Article 10, freedom of expression, and Article 11, freedom of assembly and association.

This means that, because of the Human Rights Act, public authorities like police forces have to act in a way that doesn’t breach your rights to free expression and association and must take certain steps to facilitate peaceful protest.

WHAT YOU NEED TO KNOW

If you are attending a protest, it’s a good idea to take a bottle of water, sunscreen (depending on the weather forecast) and any medication you might need – especially if you are worried that you might be kettled or outside for a long time.

If you get arrested it’s important to be able to get in touch with the people you need to – even if your phone is out of battery. It’s a good idea to write down a friend or family member’s number and keep it with you.

You should also keep the details of a solicitor who you can call if you get into trouble.

Liberty cannot provide representation if you have been arrested, but if you would like help and advice in other areas of protest law, please get in touch with our Advice and Information team.

A number of Extinction Rebellion protests have already been charged with the criminal offences.

If you want to be involved in similar protest, it is important that you know about these offences, so that you can avoid committing them – or at least know what you’re getting yourself into.

Criminal charges can be expensive and traumatic to fight – even if you are ultimately acquitted. Convictions and cautions will be held on your criminal record and can result in long term difficulties, including in gaining employment.

It is a criminal offence to obstruct free passage along a highway wilfully and without lawful authority or excuse.

Protest might be considered a good excuse for deliberately blocking a road – but you would only be successful if you can also show that your actions were reasonable. What is reasonable will be for the courts to decide, but it should take into account both your rights to freedom of expression and the amount of disruption caused.

OBSTRUCTING TRAINS OR CARRIAGES ON THE RAILWAY

It is also a criminal offence to deliberately try to obstruct a train or railway carriage. This can include slowing or stopping a train in a variety of ways: three Extinction Rebellion activists have been charged with this offence for climbing on top of a DLR train at Canary Wharf station.

The Police have the power to issue orders that restrict or limit marches or other demonstrations if they reasonably believe that they may result in serious public disorder, serious damage to property or serious disruption to the life of the community.

It is a criminal offence to knowingly ignore these orders, but it is a defence to show it was for reasons outside of your control or because the order wasn’t properly made – for example because it failed to take into account the rights to free assembly.

It is also an offence to incite others to breach the order – for example, if you were to lead a protest down a street you knew the police had prohibited you from marching down.

Maximum penalty: £1000 fine for breaching orders; 3 months in prison and £2,500 fine for inciting others.

OBSTRUCTING A POLICE OFFICER IN THE EXECUTION OF THEIR DUTIES

It is a crime to deliberately make it more difficult for a police officer to carry out their duties unless you have a lawful excuse. It is not enough to suggest that you think what the police are doing is wrong or that what you are doing is morally justified.

This offence can cover a number of different activities, but examples are giving the wrong name and address or otherwise misleading the police.

Refusing to provide information to police, however, is not obstruction and is usually advisable (see below).

Some people have suggested that it will be possible for protesters to defend criminal charges on the basis that they are behaving reasonably or that their actions are necessary in the face of a climate crisis.

While for some crimes what is reasonable will be taken into account, acting reasonably is NOT a catch-all defence.

It is also not advisable to rely on the defence of ‘necessity’ – i.e that commiting a criminal offence was necessary given the circumstance. While this can in theory be employed as a defence to most criminal offences, it has only been successful in truly exceptional circumstances – usually where there are no other options to prevent serious injury or death. It hasn’t successfully been used by climate activists or protestors and we would recommend getting specialist legal advice before attempting to rely on it in any circumstances.

WHAT TO DO IF YOU’RE ARRESTED

The Police have a power to demand your name and address if they have reason to believe you have acted in an anti-social manner (and it is an offence to refuse to provide it), but otherwise you are under no obligation to provide personal details until you appear in court.

This includes when you are ‘booked in’ or processed at the police station after an arrest. Many protesters choose to refuse to provide their personal details until they absolutely have to, in order to stop the Police gaining information about them or the groups they work in.

However refusing to provide your details does mean that the police are more likely to hold you at the police station – usually there is a 24 hour limit on detaining someone without charge before you must be released.

GETTING SUPPORT FROM AN ‘APPROPRIATE ADULT’

If you are vulnerable for any reason – including having a history of mental health problems – or are under the age of 18, you should have an ‘appropriate adult’ to support you while at the police station.

The ‘appropriate adult’ can be someone you know and trust – for example, a friend or family member – provided that they weren’t involved in the alleged offence you were arrested for.

If there is no one you particularly want or if you can’t get in touch with them, the Police should arrange for an independent appropriate adult to come to the station to help you.

TALKING TO THE POLICE

It is not advisable to talk with the police about what has happened before receiving the benefit of legal advice – regardless of what you have or haven’t done. This includes chatting with police officers while being transported or during the period in which you are ‘booked in’ at the police station.

You can respond with “No Comment” at any point during your arrest and questioning – we would advise you do so at least until you have spoken to a lawyer.

An exception to this if you want to request an ‘appropriate adult’ or have any medical concerns you need to make the Police aware of. This includes confirming whether or not you suffer from a history of mental health problems – otherwise you may be subjected to additional unpleasant searches and attention.

It is vital that you get advice from a lawyer before undergoing an interview, accepting a caution or choosing how to plead to a charge.

Police stations have independent solicitors on duty to advise people who have been arrested. However, these solicitors will not necessarily be specialists in advising on protest law – so it may be worth doing some research before you protest.

One thought on “Summer of Discontent? Your Legal Protest Rights”