The illegal sanctions imposed by the US on Venezuela have caused billions of dollars of losses for the Venezuelan economy and have killed over 40,000 since 2017 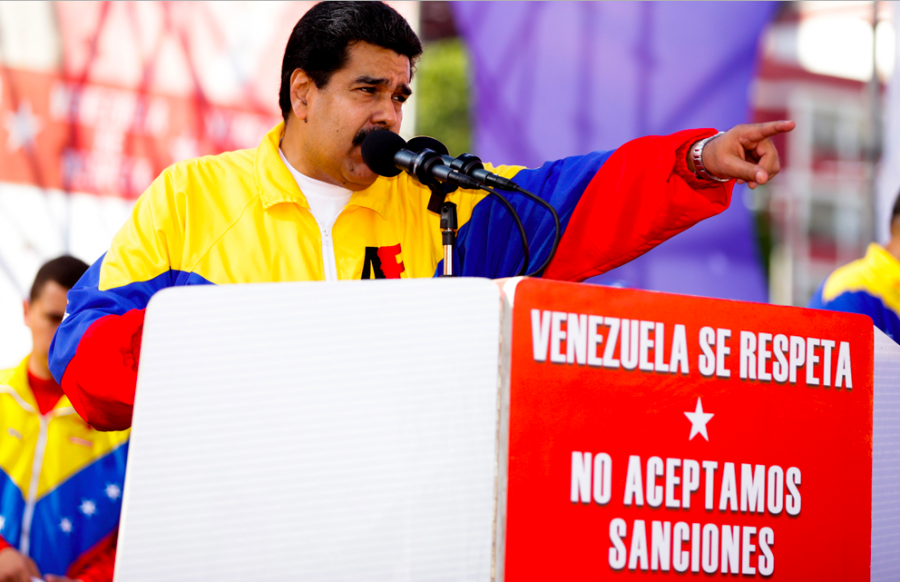 Today, Venezuela faces a serious assault on its sovereignty, democracy and integrity as the United States and its allies intensif the campaigns of aggression against the country. Over the past several months, this aggression took a more visible form when US-backed National Assembly member Juan Guaidó declared himself “interim-president” of the country and declared democratically elected president Nicolás Maduro a “usurper.”

Since his declaration, more direct tactics to force regime change have been implemented, such as attempts to incite a military coup d’état and bids to sabotage the infrastructure of the National Electrical System. Meanwhile, Venezuelan intelligence dismantled terrorist cells that were plotting assassinations of political and social leaders

In addition to all these direct attempts, the US has been waging a dirty war against Venezuela through economic sanctions since 2014. This continues to cost Venezuela billions of dollars and has had a dire impact on the people of Venezuela, whom the US claims it wants to save.

Over the past several years, there have been over 150 separate sanctions and punitive measures applied on Venezuela. The US, through Executive Orders and laws, has sanctioned high-level government officials, put pressure on international institutions to stop all trade and transactions with Venezuelan institutions, and targeted the foundation of the Venezuelan economy – its oil production.

The Latin American Strategic Geopolitics Center (CELAG) explained in a report that the blockade as a strategy “seeks to restrict the capacity of national income (if it is an embargo on the main source of resources of the country), shut off external sources of financing, and boycott the country’s ability to access international markets for goods and services”.

In December 2014, the United States Congress passed the “Venezuela Defense of Human Rights and Civil Society Act of 2014”.  The law called for the US president to “impose U.S. asset blocking and U.S. exclusion sanctions” against any individual, current or former Venezuelan government employee who has engaged in behavior considered by the US government as human rights abuses.

A couple months later on March 8, 2015, former US President Barack Obama issued Executive Order 13692 which deemed Venezuela an “extraordinary threat to the national security and foreign policy of the United States” and declared a “national emergency to deal with that threat”. This order gave the president special powers that allowed him to impose sanctions or freeze assets and urged those who conduct financial transactions with the Venezuelan government to stop. The order was renewed by the Obama administration in 2016 and in the same year, its impact began to be felt on the Venezuelan economy.

Several other international banks and financial companies such as Citibank, Banco Novo Portugal, BDC Shandong, Deutsche Bank, Credit Suisse and others followed suit and took a variety of punitive measures against Venezuelan accounts. These included prohibiting transactions with Venezuelan accounts, closing accounts, imposing arbitrary fines on transactions made by Venezuelan institutions, rejecting or blocking payments by Venezuelan institutions, and retaining money without allowing it to be mobilized.

With the arrival of Donald Trump to the US presidency, the sanctions and punitive measures intensified. In August 2017, the US government issued an order which prohibited the Venezuelan government from borrowing in US financial markets. This measure had several side-effects like preventing the government from restructuring its foreign debt and causing oil production to fall more than three times the rate of the previous twenty months. The decline in the rate of oil production translated to a loss of $6 billion in oil revenue over the next year.

In April 2019, the Trump administration announced they would slap new sanctions on Central Bank of Venezuela, by cutting off its access to US currency and further limiting its ability to conduct international financial transactions.

These sanctions are more than just executive orders and laws. They have a real impact. To get an idea of some of the financial losses:

José Guzmán Tato, a Venezuelan activist from the Left Cultural Front, talked to Peoples Dispatch on the impact of these sanctions on the common citizen: “Sometimes, it would seem that these sanctions exist on a different geopolitical sphere, and that they would not have such a direct impact, because at first, they were sanctions that were directed at the assets of Venezuelan public functionaries abroad. But we have seen a progressive process of loss of liquid funds. It has become very hard to find money in cash to be able to carry out commercial exchanges with ease.”

He said that the hyperinflation was another palpable impact of the sanctions on a day-to-day basis, “There is around 4-5% inflation daily. So when we try to do groceries for the week, one has to calculate for example that in two weeks, there will be around a 30-50% increase of the prices. It is very unstable.”

Guzmán explained that this inflation occurs due to the the speculation generated around the raising of the price of the dollar in relation to the Bolívar or in relation to the raising of the minimum wage, “it is a very draining situation on a day-to-day level. Accessing goods of for primary and secondary needs, such as food, cleaning products, hygiene products, and general maintenance products has become very difficult.”

A report released by Center for Economic and Policy Research (CEPR) highlighted that the losses to the Venezuelan economy and the blockade and boycott against doing business with Venezuela has affected above all, its people. Venezuela has been unable to import sufficient food and medicine because it does not have sufficient liquid funds and on several occasions, its payments to purchase these essential items has been blocked.

The National Survey on Living Conditions, an annual survey of living conditions administered by three Venezuelan universities, reported that from 2017 to 2018, a year which saw the intensification of the sanction, there was a 31% increase in general mortality which would imply more than 40,000 deaths.

Guzmán commented however, that international health organizations, such as the Red Cross, have been receiving supplies but they are not being distributed due to political tension and their stance against the government policies, which he deems a position “of indifference and of criminality by the authorities that align with the policies of NATO, of the State Department (US), and many times the UN does not even defend the interests of the Venezuelan people”.

Reports on the sanctions also highlight that food imports have drastically decreased. While in 2013, food imports were estimated at $11.2 billion, in 2018, that number dropped to $2.46 billion. There has been a clear reduction in caloric intake across the population due to the sanctions.

Guzmán remarks that “The day-to-day Venezuelan reality is boiled down to us being without the key supplies of medicine and food. It is a challenging situation where the Venezuelan people are suffering, and are at risk. They lack supplies, and there is an overall impoverishment of daily life. This is the most concrete expression of the daily life of the economic war.”

As they have always done, the Venezuelan people will continue to resist imperialist aggression and will continue to come up with collective, people-centered solutions to the challenges ahead. The internationalists and peace-loving people of the world must continue to support them and denounce the criminal actions of the US and its allies who pretend to defend human rights and democracy. 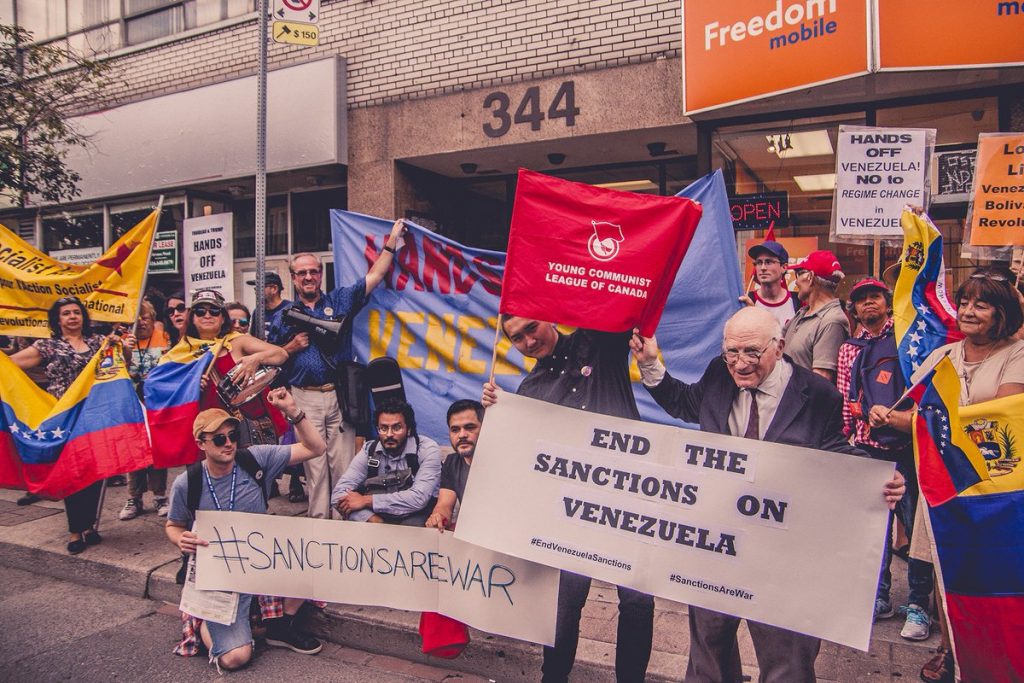 Members of the Communist Party of Canada protest against sanctions August 9, 2018. Photo: @compartycanada