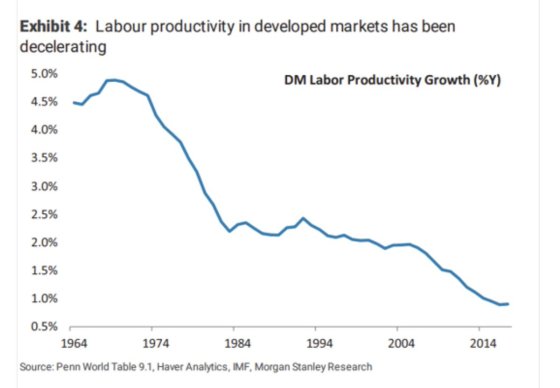 Well, I think we do.  As I outlined in a previous post, over the last 40 years and especially in the last 15, there’s been a broad-based slowdown in output per hour worked across the major economies. For the top G11 economies (which excludes China), it’s currently running at a trend rate of just 0.7% p.a. 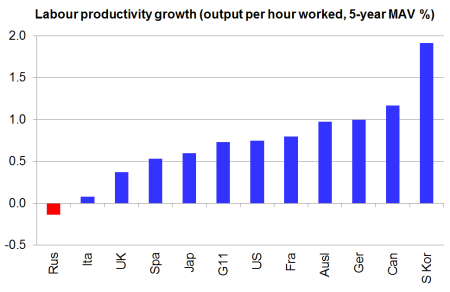 Russia’s productivity level is falling, while that of Italy and the UK is hardly moving.

But why is productivity growth in the major economies falling? The productivity puzzle has been debated by mainstream economists for some time now. The ‘demand pull’ Keynesian explanation is that capitalism is in ‘secular stagnation’ due to a lack of ‘effective demand’,which is necessary to encourage capitalists to invest in productivity-enhancing technology. This is the view of such Keynesians as Larry Summers or Martin Wolf. It is also promoted in semi-Marxist form by John Bellamy Foster at the Monthly Review.

Then there is a ‘supply-side’ argument from other conventional economists that there are not enough effective productivity-enhancing technologies to invest in – the day of the computer, the internet etc, is over and there is nothing new that will have the same impact.  This thesis is strongly propounded by Robert J Gordon.

But there is also another very simple explanation. There are three factors behind productivity growth: the amount of labour employed, the amount invested in machinery and technology and the X-factor of the quality and innovatory skill of the workforce.  Mainstream growth accounting calls this last factor, total factor productivity (TFP), measured as the unaccounted-for (residual) contribution to productivity growth after capital invested and labour employed.

Evidence shows that productivity growth is mainly driven by capital investment, which replaces labour with machines – as machines boost the output of each worker using the latest technology, they also reduce the number of workers needed.  In the graph below, the US Conference Board shows, in the 20 years up to the global financial crash, the main contribution to productivity growth came from capital investment (32%+18%); labour contributed 23% and TFP 26%.

And TFP growth slowed after the Great Recession in most economies, except for China and India.  In the US, all three factors driving productivity growth were at their strongest in the ‘hi-tech’ decade of the 1990s, but in the 2000s, all factors slowed sharply. 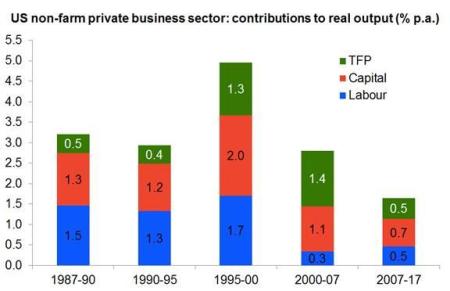 Indeed, the slowdown in productivity growth in the AEs began in the 1970s.  And this is no accident. 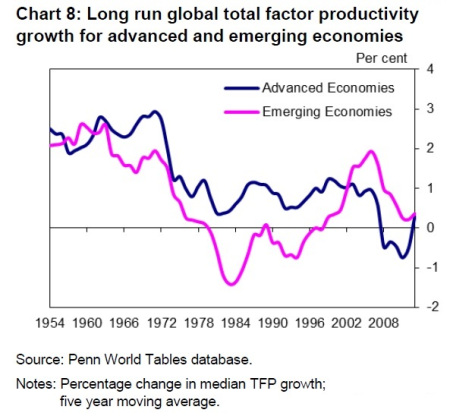 Decomposing the factors driving productivity growth clarifies things.  Slowing investment in productive assets, particularly hi-technology led to a slowing in the productivity of labour.  Here is a figure generated by JPMorgan economists recently.  There has been a secular fall in the fixed asset investment to GDP in the advanced economies in the last 50 years ie starting from the 1970s. 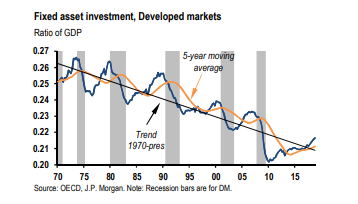 Part of the decline in US capital and labour investment can be laid at the door of increased globalisation as American companies went overseas for their factories and activities. But investment to GDP has declined in all the major economies (with the exception of China). 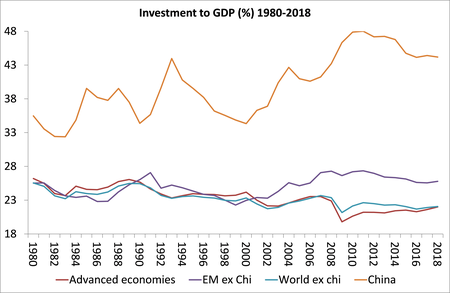 In 1980, both advanced capitalist economies and ‘emerging’ capitalist ones (ex-China) had investment rates around 25% of GDP. Now the rate averages around 22%, or a more than 10% decline.  The rate fell to 20% for advanced economies during the Great Recession.

JPMorgan’s economists note that situation is becoming serious.  Growth in global business investment in new equipment is grinding to a halt for the third time since the Great Recession ended in 2009. 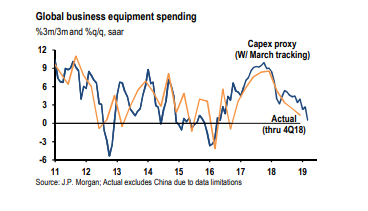 And the JPM economists comment: “Even more concerning is that the latest survey data suggest the capex growth slowdown has yet to find a bottom.”  Their proxy model forecast is for zero growth in 2019. 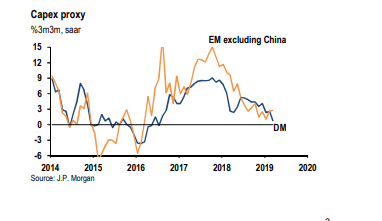 So secular slowing of productivity growth comes from the secular slowing of more investment in productive value creating assets.  The next question follows: why did new investment in technology begin to drop off from the 1970s? Is it really a ‘lack of effective demand’ or a lack of productivity-generating technologies?  More likely it is the Marxist explanation: businesses in the major economies experienced a secular fall in the profitability of capital and so began to think that it was not profitable enough to invest in heaps of new technology to replace labour. 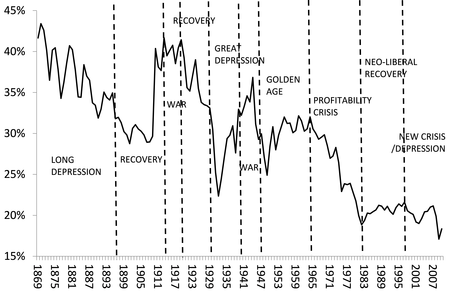 This has been strikingly clear in the post Great Recession period.  In many major economies like the US, the UK, Japan and in Europe, companies have preferred to keep their labour force and then employ new workers on more ‘precarious’ contracts with fewer non-wage benefits and part-term or temporary contracts. That is revealed in very low official unemployment rates alongside low investment rates. Thus productivity growth is poor and overall real GDP growth is below-par.

And the share of investment in the productive value creating sector of the major economies has also declined because of the increase in investment in unproductive labour and sectors ie. marketing, commerce, finance, insurance, real estate, government (particularly arms spending etc).  These sectors sucked up an increased share of surplus value, thus lowering the profitability of the productive sectors.

Here is a chart produced by Australian Marxist economist, Peter Jones, from his new book, The Falling Rate of Profit and the Great Recession, which decomposes the factors affecting the rate of profit in the productive sectors of the US economy: (s-u)/C.  The factors lowering profitability are: 1) a rising organic composition of capital a la classical Marxist analysis (green bars); and 2) the rise in the share of unproductive labour (blue bars). 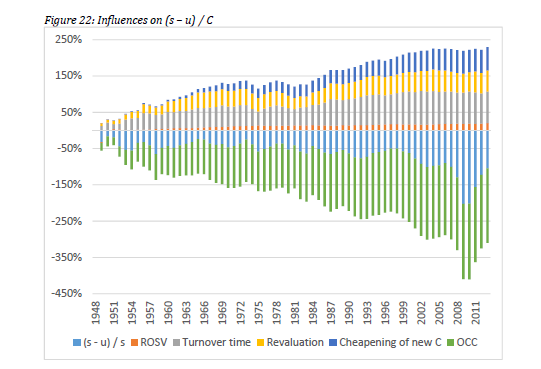 Over the long term, these factors have overwhelmed any counteracting factors that raise profitability like a rising rate of exploitation of labour or the cheapening effects of new technology.  No wonder, fixed investment rates have been falling and thus productivity growth.

JP Morgan economists also note that the slowdown in productive investment is driven by slowing profitability (which leads to a lack of business confidence to invest): “the projected slowing in capex growth owes entirely to weaker confidence and profit growth relative to past years.”

But there is one other key factor that has led to a decline in investment in productive labour: the switch by capitalists to speculating in fictitious capital in the expectation that gains from buying and selling stock market shares and government and corporate bonds will deliver better returns than investment in technology to make things or deliver services.  As profitability in productive investment fell, investment in financial assets became increasingly attractive.

The growth of fictitious capital has been a long-term feature since the trough in the profitability of capital by the early 1980s.  The share of financial sector profits in total profits in the US and other capitalist economies rose at an increasing rate up to the global financial crash – note that this share only really rocketed from the 1980s. 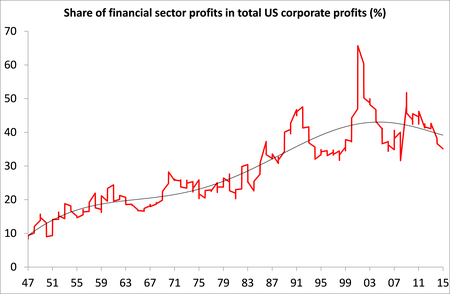 And much of this investment is fictitious (as Marx called it) as the prices of stocks or bonds may bear no relation to the underlying earnings of assets of companies, and these prices  can dissolve in any financial crash.

Peter Jones in his book provides one measure of the amount of financial profits that are fictitious and there are other new studies on their way.  But one crude but simple measure of the size of fictitious capital can be based on Tobin’s Q.  Named after the leftist economist James Tobin of the 1970s, it measures the ratio between the market price of equities against the book value (or price) of the fixed assets of companies in an economy.  The ratio thus expresses the fictitious portion of financial assets.

We can see that in the bull market in stocks from the early 1980s up to dot.com bust in 2000, the market value of US companies was some 70% above money value of company assets. 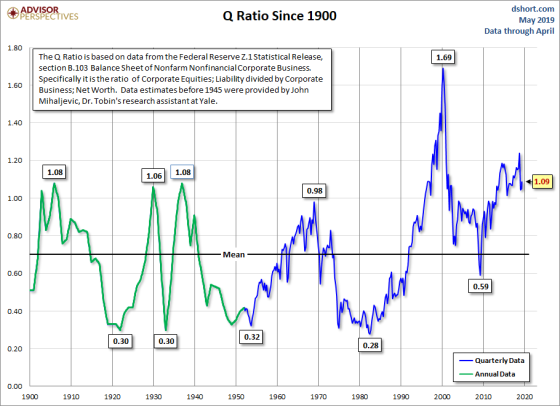 Given that the long-term average ratio of Q is about 70 not 110 as now, you can thus gauge the extent of the fictitious part of buying financial assets.

So while the stock market booms, with the help of near zero interest rates and quantitative easing, the profitability of productive capital stays low – and along with it, low investment growth and poor productivity growth.