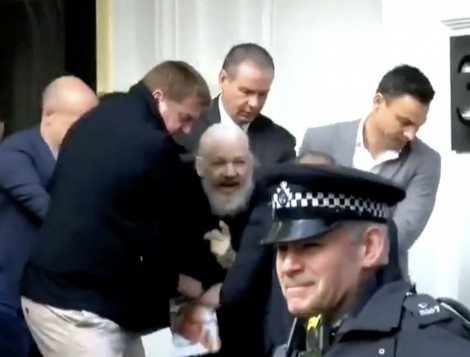 Julian Assange, the WikiLeaks founder now imprisoned in the UK, has been moved to the hospital wing of the Belmarsh prison in the UK, prompting concerns about his health pending the hearing on his extradition to the US.

“The decision of prison authorities to move him to the health ward speaks for itself,” said WikiLeaks.

It said Assange has lost a lot of weight and was barely able to speak to his Swedish lawyer last week.

Assange’s health had already “significantly deteriorated” during the nearly seven years he spent inside the Ecuadorian embassy in London, and has continued to get worse over the seven weeks he has spent in Belmarsh, WikiLeaks said in a statement on Wednesday.

“Assange’s health situation on Friday was such that it was not possible to conduct a normal conversation with him,” his lawyer Per Samuelson told reporters after visiting Belmarsh, but the quote was barely reported in Sweden, let alone elsewhere.

Sweden has rejected Samuelson’s motion to delay Assange’s extradition hearing, though he was never charged with anything.

Swedish investigators never interviewed Assange about claims of “sexual assault” that seem to have been trumped-up as a pretext to extradite him to the US in 2012, and prompted him to seek asylum in Ecuador.

The preliminary hearing on Washington’s extradition request is still scheduled for today, May 30.

The US has charged Assange with 18 counts under the Espionage Act, which carry a sentence of up to 175 years in prison.

“Julian’s case is of major historic significance. It will be remembered as the worst attack on press freedom in our time,” said Kristinn Hrafnsson, WikiLeaks editor-in-chief.

Kristinn Hrafnsson urged people everywhere to oppose their politicians, courts, police and prisons from being abused to “leave this black stain on history.”

The Wikileaks statement also called attention to pressure by the United States on the Ecuadorean government to deny Assange during his last year in the embassy any communication rights in a bid to have the asylum seeker “isolated and gagged.

Belmarsh prison is a high-security prison located in Thamesmead southeast London and holds hardened murders, rapists and other violent offenders.

Everyone else must take my place: Assange in letter from British prison

In a handwritten letter from Belmarsh prison, Julian Assange says he is being denied a chance to defend himself and that elements in the US that “hate truth, liberty and justice” want him extradited and dead.

The letter was sent to independent British journalist Gordon Dimmack. It was dated May 13 – ten days before the US announced 17 additional charges under the Espionage Act against the jailed whistleblower.

In light of the new indictment, Dimmack read out the letter in a YouTube video. A photo of the handwritten note was soon posted online as well.

“I have been isolated from all ability to prepare to defend myself: no laptop, no internet, ever, no computer, no library, so far, but even if I get access it will just be for a half an hour, with everyone else, once a week,” Assange wrote.

He wrote: “The other side? A superpower that has been preparing for 9 years, with hundreds of people and untold millions spent on the case.”

I am defenseless, he wrote.

“I am unbroken, albeit literally surrounded by murderers, but, the days where I could read and speak and organize to defend myself, my ideals, and my people are over until I am free! Everyone else must take my place,” Assange wrote in the letter.

“The US government, or rather, those regrettable elements in it that hate truth, liberty and justice, want to cheat their way into my extradition and death, rather than letting the public hear the truth, for which I have won the highest awards in journalism and have been nominated 7 times for the Nobel Peace Prize,” Assange wrote.

Truth, ultimately, is all we have, Assange said in the letter.

The new charges against Assange have alarmed even the mainstream media outlets that have spent years pouring vitriol on WikiLeaks, as they began to realize his prosecution along those lines would essentially criminalize all journalism.

One thought on “Assange BULLETIN: The journalist can barely talk, moved to prison hospital”