Behind the backs of the population, a bipartisan group of US lawmakers, military leaders and intelligence agents are engaged in a secret operation to endow the executive branch with dictatorial powers to suppress social opposition in the United States.

On July 27, Donald Trump offered a glimpse of this movement within the state apparatus, tweeting, “Consideration is being given to declaring ANTIFA … a major Organization of Terror (along with MS-13 & others). Would make it easier for police to do their job!” On August 17, Trump repeated the same threat.

Trump has seized upon the actions identified with ANTIFA, a loose amalgam that includes middle class protesters and, no doubt, police provocateurs, in order to label any form of left-wing opposition to fascism “terrorism,” a hallmark of police-state dictatorships from Hitler’s Third Reich to Pinochet’s Chile. 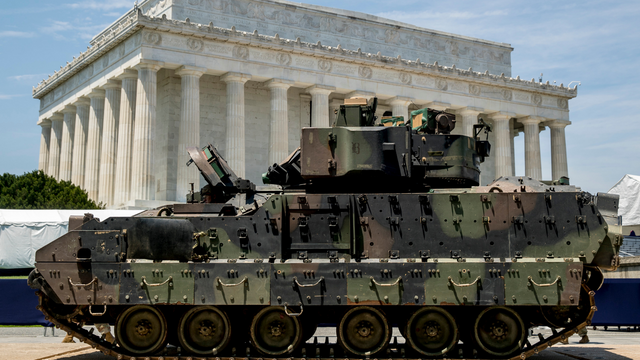 A US Army Bradley Fighting Vehicle waits to be driven into place in front of the Lincoln Memorial for President Donald Trump’s ‘Salute to America’ Fourth of July event. (AP Photo/Andrew Harnik)

Trump is not merely expressing a personal opinion. In the face of growing strikes and protests and mounting social unrest internationally, the American ruling class is acknowledging that maintaining the flow of corporate profits and defending unprecedented levels of social inequality against the opposition of the broad masses of people requires dictatorial forms of rule. Under conditions in which three US billionaires control as much wealth as half the US population, even the worn-out forms of democratic rule have become untenable.

The next steps—including for martial law, mass arrests of left-wing dissidents, and shutting off the Internet—are being developed out of the public view.

For example, Brennan Center co-director Elizabeth Goitein wrote in the Atlantic in February that the military-intelligence agencies now interpret a section of the 1934 Communications Act as granting the executive branch the power to “seize control of US internet traffic, impeding access to certain websites” as well as to shut down the internet, block the delivery of email and manipulate smart speakers like Amazon Alexa upon the president’s proclamation “that there exists a state or threat of war involving the United States.”

The government is also developing plans to abolish the Constitution and carry out mass arrests.

Perhaps the most well-known PEAD was the directive that authorized Lt. Col. Oliver North and the Federal Emergency Management Agency (FEMA) to establish a contingency plan authorizing “suspension of the Constitution, turning control of the United States over to FEMA, appointment of military commanders to run state and local governments and declaration of martial law during a national crisis,” as The Miami Herald reported in its 1987 exposure of the program, known as “Rex 84.”

Goitein notes that such plans are far from dormant:

“A 2007 Department of Homeland Security report lists ‘martial law’ and ‘curfew declarations’ as ‘critical tasks’ that local, state, and federal government should be able to perform in emergencies. In 2008, government sources told a reporter for Radar magazine that a version of the Security Index [the mass arrest list of the mid 20th century] still existed under the code name Main Core, allowing for the apprehension and detention of Americans tagged as security threats.”

Trump’s July 27 and August 17 tweets to label Antifa a “major terrorist organization” are an expression of these police state plans, which can only be implemented through massive censorship and the silencing of dissent. These plans lie behind the international imperialist campaign to imprison and vilify WikiLeaks founder Julian Assange and whistleblower Chelsea Manning, both of whom remain locked up for the “crime” of exposing such crimes to the world.

These plans are bipartisan.

Democratic Chairman of the House Intelligence Committee Adam Schiff recently introduced the “Confronting the Threat of Domestic Terrorism Act.” This bill, which has a high chance of passage, would allow the Attorney General to prosecute people or groups as “domestic terrorists” if they engage in or conspire to engage in activity that seeks to “influence the policy of a government by intimidation or coercion” if that activity impacts “interstate or foreign commerce,” which by nature any workers’ strike would do. The “conspiracy” clause will facilitate the prosecution of individuals based on political opinion alone.

The Democrats and the Democratic-linked press present this initiative as aimed against right-wing mass shooters. But because shootings, bombings and other acts of terrorist violence are already illegal in every state, the only purpose for the proposed law is to criminalize free association with those who will be listed as “domestic terrorists,” as well as to apply anti-foreign terrorist laws like the PATRIOT Act against US citizens engaged in First Amendment-protected speech and activity. This is directed ultimately against the working class.

As law professor and former Justice Department attorney Robert Chesney enthusiastically explains, a domestic terrorism statute would allow the government to compile “a list of proscribed organization to which it becomes a crime to provide, knowingly, any form of support (including becoming a person subject to the group’s orders).”

In addition, if “domestic terrorism” is made a legal category, then Sections 1021 and 1022 of the National Defense Authorization Act (NDAA) may give the executive branch the power to arrest and indefinitely detain without charge or trial anyone labeled a “suspected terrorist” based on “extreme” political views.

The introduction of the war on terror into domestic law has more than legal significance. For nearly two decades, US imperialism has used the most brutal and criminal methods against the international working class in a desperate bid to maintain the hegemonic position it enjoyed in the post-war period.

To this end, the US has killed millions in Iraq, Syria, Afghanistan, Yemen, Libya, Pakistan, Somalia and elsewhere. Under the pretext of fighting “terrorism,” the US has fought to control the world’s geopolitical chokepoints and natural resources. But these wars have solved nothing. They have engendered massive opposition at home and have only metastasized the historical crisis confronting American imperialism.

Now, methods of equal or greater ruthlessness and criminality are being planned within the US itself, both in an attempt to maximize the level of exploitation of the working class and to terrorize the population into submission, ensuring the ruling oligarchy’s monopoly of political power.

Congressional Democrats have been key participants in creating the powers Trump is now wielding, voting overwhelmingly for the PATRIOT act, supporting the Obama administration’s assertion of the right to kill American citizens without trial, and now, acquiescing to even the most flagrantly dictatorial actions by the would-be tyrant in the White House.

The Democrats’ role in creating the framework for dictatorship reflects the fact that they, like Trump’s Republicans, express the social interests of the financial oligarchy and the affluent upper middle class, both of which look with horror at the growing movement of the working class.

The threat of dictatorship in the US is part of an international process. Across the world, governments are creating the legal and physical framework for mass repression.

But these conspiratorial cabals of financiers, generals and spooks will not be able to implement their plans for dictatorship without arousing the profound social opposition of billions of workers and young people worldwide. That opposition must be politically mobilized in a conscious struggle to tear control of society out of the hands of the capitalist class, dismantle the military-intelligence agencies and reorganize the world’s productive forces on an egalitarian socialist basis.