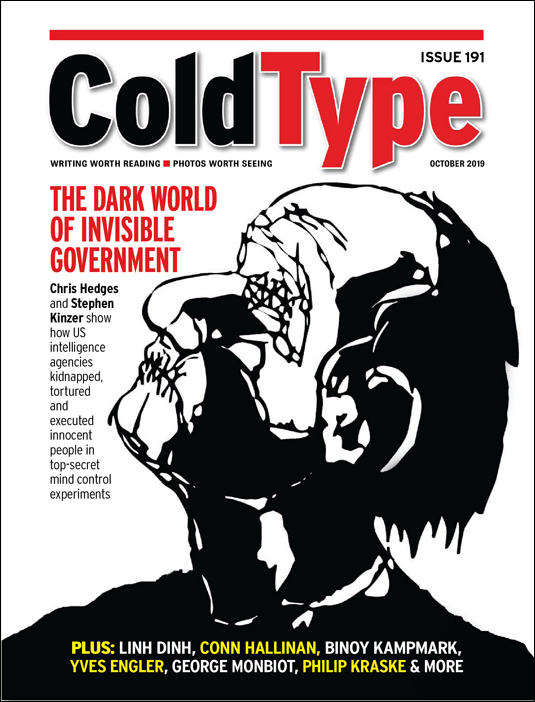 In this issue’s cover story, Chris Hedges looks inside the secret world, uncovered by author Stephen Kinzer, of murderous mind control experiments conducted by US intelligence agencies over the past decades. Other top features include Binoy Kampmark on the fake arguments that surround fake news, Philip Kraske on 9/11 and the last stage of American empire, and Thomas Scripps on the contrast in the punishment of Wikileaks’ Julian Assange and Tommy Robinson, the rightwing fanatic who was also jailed at London’s notorious Belmarsh prison. Linh Dinh reports from his job sorting refuse in Vietnam, Conn Hallinan analyses the drone attack that upset the US Middle East applecart, George Monbiot tells why we need to limit individual wealth, Yves Engler reveals how Iran property seizures highlight Canadian hypocrisy, and Sam Pizzigati writes about the General Motors strike. We’ve also  got eight pages of stunning photographs from actress Jessica Lange’s latest book, Highway 61, and much more …

All 191 issues of ColdType are available at
www.issuu.com/coldtype