On Thursday the WSWS met John Shipton, Julian Assange’s father, in Berlin to talk about the condition of his son’s jailing in the maximum security Belmarsh Prison in London. The day before Shipton had given a press conference and addressed the weekly “Candles 4 Assange” rally in Berlin, to inform the public about his son’s illegal imprisonment and demand his freedom.

The interview with Shipton, a very warm and courageous human being, started with an interesting and contentious half-hour of discussion. He raised fundamental historical and theoretical issues like the viability of Marxism, socialism and a revolutionary perspective. However, he agreed ultimately that the task at hand was working together to build a powerful, international campaign to prevent Assange’s rendition to the United States and secure his freedom. 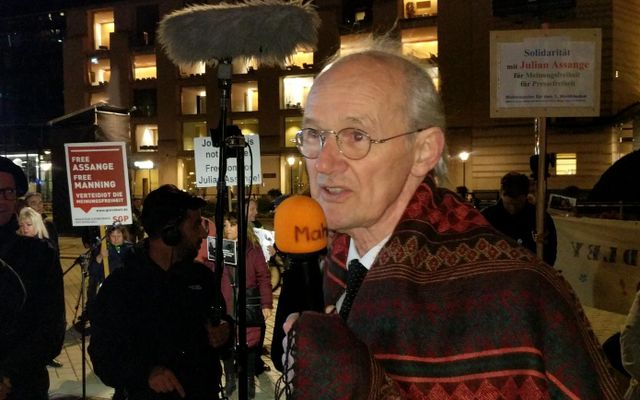 John Shipton at the “Candles 4 Assange” event in Berlin

Shipton, who had visited his son just before traveling to Berlin, described the gruesome situation he is facing in Belmarsh.

“Julian was sentenced to 50 weeks in jail for minor infringements in a maximum-security prison in solitary confinement for 22 to 23 hours a day. There is a limitation of visitations which is two social visits for two hours. So those two hours, you can imagine, are very, very precious things. The Belmarsh prison is quite a way out and the requirements of registration are complex. That is his day to day situation.”

Due to his deteriorating health—Shipton said his son has lost 15 kilos since his imprisonment in Belmarsh—Assange has been transferred to the hospital ward of the prison.

Among the most infamous information made available by WikiLeaks is the “Collateral Murder” video, which documented the deliberate killing of civilians and Reuters journalists in Baghdad.

We also spoke briefly about the hundreds of thousands of US diplomatic cables, exposing the conspiracies and criminal activity of US embassies and consulates around the world. I remarked that in 2011 the WikiLeaks revelations played a role in inspiring the masses in Tunisia and Egypt to rise up in revolution against the imperialist-backed dictatorships.

Shipton nodded: “There was also the exposure of Angela Merkel’s personal telephone being bugged by some American spy agency. This is a shocking thing and I hope that the German people will ensure that the rules between countries are obeyed in every way. Particularly the international conventions concerning asylum which in Julian’s case weren’t obeyed. It would be a great benefit to the people of the United Kingdom if the British government would obey these international conventions it has signed.”

Shipton denounced the fact that his son is being held in a maximum prison for supposedly having breached the Bail Act. “Julian cannot be charged for bail skipping because he is an asylee and every asylee falls under conventions which the UK has signed. Julian is a journalist.”

He added that “every journalist has an interest that the truth of Julian’s situation being put before their editors every day. Newspapers should have a great interest in Assange because also their freedom to publish and to investigate will be constrained and is being constrained. I understand that the World Socialist Web Site is being reduced by over 40 percent in its traffic by Google and search engines. This is repression of free speech. It is up to us and up to newspapers and news organisations to ensure that Julian is free. It is about the freedom to publish.”

Asked about how much his son is aware of the support he is getting among workers and students internationally, Shipton replied, “He is aware of that support. And I will tell him about my experience here when I see him next time on October 8. I am surprised by the depth of the support in Germany on every level of society: from parliamentarians, to writers, painters and journalists. There is very, very strong support here.

“I think the answer to Julian’s difficulties comes from the general people of Europe binding together to ensure that conventions and laws are upheld and newspapers support Julian. I think the answer in Europe lies among the people insisting that the governments do something to bring back Julian’s freedom.”

At the end of the interview we talked briefly about Carl von Ossietzky, one of the most well-known anti-war journalists in Germany in the 1920s and 1930s. Similar to Assange, he was arrested in 1931 for exposing the illegal military build-up of the German army and national security secrets. He was released in 1932, but was subsequently rearrested by the Nazis, who tortured him, leading to his death in 1938.

“I can see the parallels,” John Shipton said, “but I am not entirely happy with it because like Gramsci [the Italian anti-fascist and Marxist] he came to a very bitter end. We have to make sure that this doesn’t happen again. This is our task. And I think we will win.”