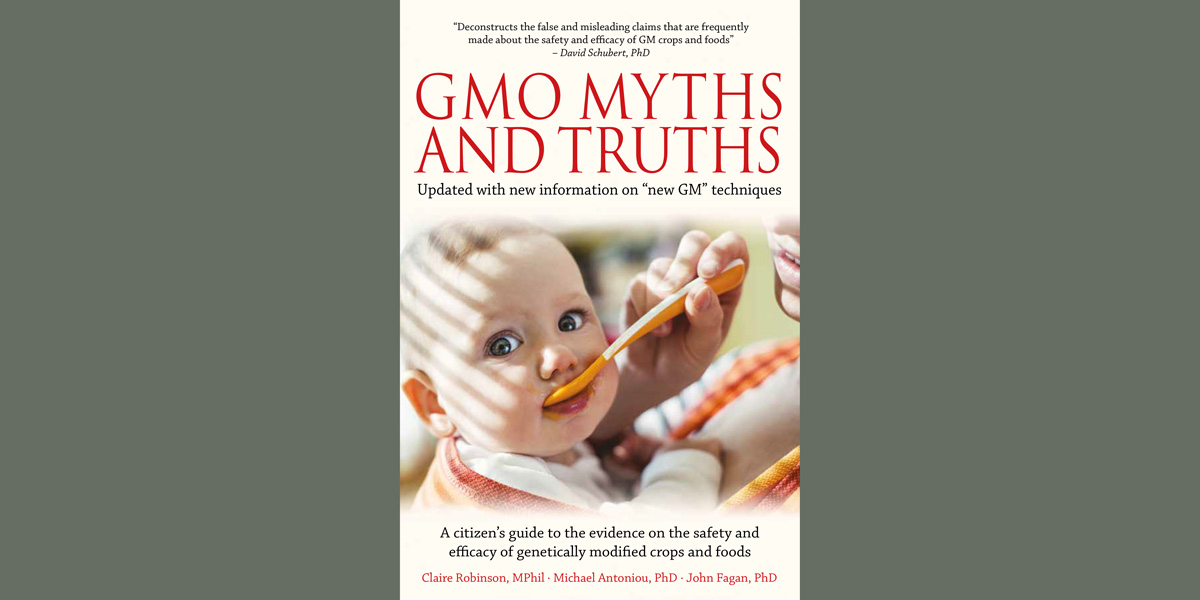 The book GMO Myths and Truths: A Citizen’s Guide to the Evidence on the Safety and Efficacy of Genetically Modified Crops and Foods is now in its 4th edition.*

Available from Amazon and Chelsea Green Publishing, the 4th edition contains a whole new chapter on gene editing. The book is co-authored by Claire Robinson, who is also the managing editor of GMWatch, and two genetic engineers: Michael Antoniou, PhD of King’s College London; and John Fagan, PhD, who pioneered GMO testing methods and is the recent co-founder of Health Research Institute Laboratories.

Claire Robinson believes that this new edition is badly needed. She said, “The first three editions of the book proved popular all over the world – in India, East Asia, Russia, Europe, and North and South America. The book has also been translated, either as a whole or in parts, by volunteers into various languages.

“Then just a few years ago, it became clear that the GMO industry and its lobbyists were trying to draw the line under the ‘bad old GMOs’ and relaunch the GMO food venture in the form of new gene-edited foods and crops, which were supposedly more precise and safer than the older-style GMOs and were being claimed to be able to solve the many problems facing us, from climate change to food shortages.

“Of course we’ve heard these promises before, regarding the older-style GMOs. They were untrue then and they are untrue now.

“So we updated the book with a new chapter on gene editing, explaining this new threat to the food and feed supplies and why people need to insist that these new untested products are stringently regulated and labelled.”

Co-author Michael Antoniou, PhD, of King’s College London, said, “Gene-edited crops are easier to produce than old-style transgenic crops. Thus we face the immediate prospect of untested gene-edited crops entering our food and feed markets. It was therefore crucial that we include the new chapter on gene edited crops and the dangers that they pose to health and environment.”

Claire Robinson said, “Wherever I go in the world, I find that most people simply don’t know about the new threat to our food supply and environment posed by the new gene-edited GM foods and crops. The GMO industry and its allies are trying to force through a radical change to our food supply without people’s informed consent. Sadly, many publicly funded scientists are joining the lobby, making deceptive and un-evidenced claims about the safety of these new GMOs.

“People need to arm themselves with the facts. GMO Myths and Truths is, we believe, the best overview available today. It’s written in a format that makes it easy for the lay person or the expert to access the information they need and it’s meticulously referenced.”

Claire Robinson says that because gene editing is a fast-evolving field, the best way to stay up to date is to read GMO Myths and Truths (4th edition) for the basic understanding but also follow new developments via the GMWatch newsletters and website. A good way to quickly access the most recent articles on gene editing is to google “GMWatch CRISPR”.

Praise for the previous (3rd) edition of GMO Myths and Truths can be viewed here.

“GMO Myths and Truths is a very important contribution to the GMO debate. Written in a clear and concise style, it is an invaluable reference for those wanting to learn more about the arguments of proponents and those critical of the technology. I found it of great value in my own efforts to better understand the issue. I hope this information will be widely available to students and to the general public.” – Jane Goodall, PhD, DBE, and UN Messenger of Peace

* Links to Amazon are to Amazon.com; to access the book’s page on Amazon.co.uk, just replace the “.com” in the URL with “.co.uk”. Alternatively, go into your own country’s Amazon site and search for “GMO Myths and Truths: A Citizen’s Guide to the Evidence on the Safety and Efficacy of Genetically Modified Crops and Foods (4th edition)”.