The Syrian army campaign to liberate the terrorist held Idleb governorate was restarted yesterday. The campaign had been halted at the end of August after ceasefire negotiations between Turkey and Russia. Since then nearly a thousand people have died on all sides around Idleb during skirmishes, artillery attacks by rebels on Aleppo city and Syrian and Russian air strikes.

The general aim of the re-launched campaign is to liberate the cities Maarat al-Numan and Saraqib and to gain control over the north to south M5 highway between Hama and Aleppo. The currently most active front is in the southeast of the territory where at least two axes of attacks take place in the direction of Maarat a-Numan, a city that 80,000 inhabitants when the war on Syria started. The terrain is relatively flat and allows to make good use of tanks. 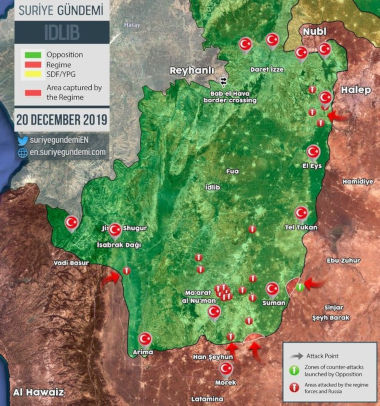 The ground campaign is supported by more than 100 aerial bombing runs per day and by heavy artillery strikes.

The reporter indicated that that the farms and villages which had been cleared included basic headquarters for the terrorist organizations used by them to attack the safe areas and launch rockets on people in Aleppo southeastern countryside and Hama northern countryside.

The Syrian Observatory in Britain confirmed the progress. It further reports that at least 38 ‘rebels’ were killed.

Another fight over Syria currently occurs at the United Nations. The UN Security Council resolution 2165 is up for its yearly renewal. It regulates UN humanitarian aid access from third countries into various areas of Syria that at some point were not held by the Syrian government. Russia wants that it is changed to adopt to new circumstances especially in the northeast of Syria.

We have never been really enthusiastic about such thing as cross-border humanitarian operations, because it runs counter to basic UN principles of providing humanitarian assistance. Nevertheless, we went for it, because we had understanding that against the background that existed in Syria, such method of delivering humanitarian assistance to those who needed it was necessary. Now things have changed. The government of Syria is in control of the major part of the territory. Humanitarian assistance is delivered as per usual procedure – with consent of Damascus. Out of four crossings for this cross-border assistance, only two are really used. We realize that there is a part of Syrian population, in Idlib in the first place, that still needs humanitarian deliveries, which, among other aspects, has to do with winter that will come soon. Probably, at this moment these so-called “cross-border deliveries” are the easiest way those who need aid can get it. Based on these and other humanitarian considerations, we have put forward our draft resolution that proposes to extend this mechanism for another 6-month term.

Russia is also concerned that the aid flows to certain groups and not to those in need. It wants the current UN aid crossings into Syria’s northeast to close down.

Parts of northeastern Syria are under control of Turkey and parts are under U.S. control with the help of the Kurdish YPG. But most of the area is now held by Syrian and Russian troops even while it continues to be under administrative control of the Kurds. The Syrian government wants to pressure the YPG Kurds to give up their control and to resubmit to the Syrian government.

It argues that aid to the area should flow through Syrian government controlled territory and should not come independently through Turkey or Iraq. It wants the aid to be distributed by the UN itself or through Syrian organizations and not through the illegitimate Kurdish administration which uses it to control the population.

Germany, Belgium and Kuwait, who wrote the current R2449 draft which is supposed to replace R2165, even want to open an additional fifth border crossing point from Turkey into the area. They rejected the Russian demands. Russia then threatened to veto the renewal of the resolution.

The Zionist lobby wants the U.S. to withdraw its share of financing of the UN aid and to give it to “international NGOs that are not registered in Damascus” or to “capable local partners in non-regime areas” – i.e the terrorist in Idleb and the YPG.

What’s In Blue detailed the development of the discussion throughout the last weeks. The Security Council was meeting yesterday to be briefed about Syria. While it was supposed to vote on the renewal the press release at the UN site only reports of a discussion.

The decision on the issue was presumably postponed. The renewal of R2165 will be redrafted and a compromise may come up for a vote later today.