Introducing an important book series on Democratic Marxism in Africa, Vishwas Satgar explains that the project is premised on a rejection of the authoritarianism of vanguardist politics and the need to learn critical lessons from all the left projects of the 20th century. There is a rich inheritance of emancipatory Marxism in Africa, which includes Frantz Fanon, Ruth First, Samir Amin, Sam Moyo, Harold Wolpe and many others. Today, Satgar argues, the challenge is to defeat carbon capitalism accelerating the climate crisis and fomenting exclusionary nationalisms and for this there has to be a return to Marx. 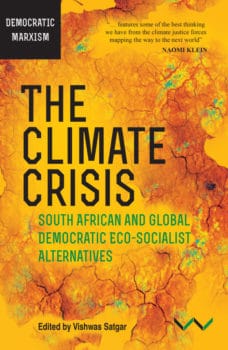 In global discourse we rarely hear the media, academy and global power structures talking about the crisis of neoliberal theory or theories of identity despite the glaring failures of these bodies of thought. By contrast, the ‘crisis of Marxism’ has received vociferous attention at different moments in the 20th century. With the collapse of the Soviet Union, many intellectuals wrote yet another public eulogy for Marxism and declared the victory of liberal capitalism, with the U.S. standard as the terminus of modern civilisation and history. This begs the question of why has Marxism been put on trial and constantly declared to be in crisis?

There are many approaches to answering this question. First, Marxist theory, grounded in Marx’s conception of alienation, exploitation, historical materialism and a structural theory of capitalism, provided the resources for radical critique but has also held out the promise of emancipation from capitalism. Second, Marxism imprinted on the three most important political projects of the 20th century: Soviet Socialism, social democracy and revolutionary nationalism. This footprint extended to most parts of the planet. Marxism was the other to capitalism. Third, the Soviet Union, borne out of the Russian Revolution, provided a conscious example of an ‘actually existing socialist society’. This escalated into the ‘Cold War’ and defined a crucial fault-line in global geopolitics. Exterminism of everyone, as E.P. Thompson called it, was assured if a nuclear conflagration came to pass.

In the African context, the Soviet Union provided an inspirational example for the communist parties, some of which attempted scientific socialist experiments (e.g., Angola, Mozambique and even the socialist aspirations of the South African Communist Party). A Sovietised consciousness also impacted the politics of Cuba, India, Vietnam and China. In some of these countries, central planning, one party states and forced carbon-based industrialisation became defining features. Marxism as official state ideology produced immense harm, violence, ecological destruction, authoritarian intellectual control and ultimately lost its emancipatory potentials. Hierarchal vanguards, claiming to act in the interests of workers or peasant-worker alliances, failed to produce emancipated societies.

It is in this context the Democratic Marxism series has emerged in South Africa, premised on a rejection of the authoritarianism of vanguardist politics (including of Southern African national liberation movements) and the need to learn critical lessons from all the left projects of the 20th century.

For those of us in Africa, there is a rich inheritance of Marxism, which has sat uncomfortably alongside official vanguardist Marxism. Sometimes it has been considered the dissident voice. In the context of the imperialist defeat of post-colonial Africa, including radical Pan-Africanism, and with over three decades of pernicious financialised capitalism, it is crucial we claim these resources for ongoing class and popular struggles. From Frantz Fanon, Ruth First, Samir Amin, Sam Moyo, Harold Wolpe and many others, there are crucial Marxist resources to strengthen our struggles and invent a new left imagination.

Some of the richness of our Marxist inheritance is reflected in key debates such as ‘dependency theory versus African capitalism’, or the debates on the accumulation trajectory for Tanzania or modes of production or ‘racial capitalism versus colonialism of a special type’ or the modalities of the agrarian transition.

The Democratic Marxism series seeks to provide a platform for both the retrieval and redeployment of this inheritance for emancipatory struggles. The late Samir Amin understood the importance of this challenge. Hence, in providing an endorsement for the second volume in the Democratic Marxism series titled: Capitalism’s Crises–Class Struggles in South Africa and the World, Amin wrote:

it shows that the processes of global change start from the peripheries of the world system and, for the visible future, that reality will continue to govern the struggles for the emancipation of labour and peoples.

The remaking of the global political economy over the past four decades has unleashed an unbridled capitalism on a planetary scale. With the spectre of Marxism vanquished, the eco-cidal logic of commodifying everything produced precariousness, gridlocked social reproduction and engendered ecological rifts that imperil our planetary life world.

An Eco-fascism is rising that defends at all costs a carbon-based way of life. For present and future generations, to defeat the carbon capitalism accelerating the climate crisis and fomenting exclusionary nationalisms–the new barbarism–there has to be a return to Marx. Every generation has to come to terms with Marx’s critique of capitalism and his case for socialism–a society that places the needs of human beings and nature, more generally, at the centre.

Going back to Marx’s ecological notebooks (published after Capital) and understanding Marx’s ecology are essential if a non-productivist, feminist eco-socialism is to emerge at the forefront of global struggles. In the third volume in the Democratic Marxism series titled: The Climate Crisis–South African and Global Democratic Eco-Socialist Alternatives, it is clear that movements central to the life and death struggles of our time are inspired by Marx’s ecology together with other  radical sources of inspiration such as indigenous thought, eco-feminism and radical democratic theory.  Naomi Klein, who provided an endorsement for the volume, wrote:

it features some of the best thinking we have from the climate justice forces mapping the way to the next world (This volume is  freely downloadable through this link).

For those of us in Africa the climate crisis is arriving with devastating and disproportionate consequences. Climate science has confirmed Southern Africa is a ‘hot spot’ and Africa is heating at twice the global average. Women, children and agrarian societies are being devastated. Cyclones (e.g., Idai and Kenneth), droughts in Southern Africa (affecting about 45 million people), floods and heatwaves are the new abnormal.

The corrupt ruling classes are incapable of dealing with these challenges, and Trump’s eco-fascist project will only increase the harm against the subaltern, more specifically the African imperial subject. In this context, the Climate Crisis volume calls for climate justice sanctions against Trump’s eco-fascist USA; it must be isolated like we isolated the apartheid regime. Moreover, the genocidal impacts of continued fossil fuel extraction and use demands justice. Trump and other carbon ruling classes and CEO’s of fossil fuel corporations should be charged with genocide before the International Criminal Court. The scientific evidence on the link between more carbon capitalism and climate shocks is overwhelming. The time has come to intensify the struggle for a Democratic Eco-Socialist Africa. This is the frontier of a new radical Pan-Africanism.

The Democratic Marxism series showcases innovative re-engagements with Marx, Marxism, and other anti-capitalist ideas. It provides a space for radical scholars and activists to grapple with the big questions of our time but in a rigorous way. To summarise, Democratic Marxism is characterised by the following:

The Democratic Marxism series seeks to elaborate the theorising of a new emancipatory politics for the 21st century.

Vishwas Satgar is an Associate Professor of International Relations at the University of the Witwatersrand, South Africa. He has been an activist for four decades. He is the recipient of the 2015 Distinguished Achievement Award of the World Association for Political Economy for initiating and editing the Democratic Marxism series.

6 thoughts on “Marxism and the Climate Crisis: African Eco-Socialist Alternatives”