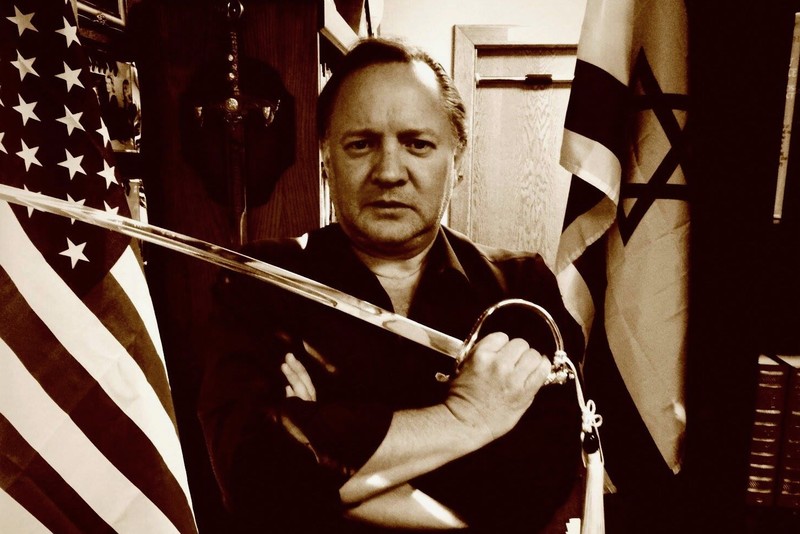 Holmes is head of Revive USA, an evangelical church based in Illinois.

Despite the rant, or perhaps because of this sort of ugliness, Holmes is listed as a speaker at the annual AIPAC conference.

On his Facebook page, Holmes expressed dismay over a “record number of Muslims working in Obama’s administration.”

He accused Obama of “snuggling up to Muslims” and “horrendous race relations.”

“You pathetic loser, Obama,” he inveighed.

Yet AIPAC is the one that is fast losing support as grassroots Democrats and progressive elected politicians increasingly understand that it is a right-wing organization which backs the subjugation of Palestinians.

With friends like Holmes, who is also aggressively prejudiced against gay and transgender people, AIPAC will continue to lose support from the left and perhaps even the political center.

On Friday, Holmes took exception to how Democratic presidential candidate Pete Buttigieg had responded days earlier to a question from 9-year-old Zachary Ro.

At a rally in Denver, Ro asked Buttigieg, “Would you help me tell the world I’m gay too? I want to be brave like you.”

Buttigieg responded with empathy to the child.

Holmes, however, accused Buttigieg of engaging in “ideological grooming” of the younger generation.

He accused Buttigieg of refusing to “acknowledge God” and of having a “debased mind.”

Invoking the Bible, Holmes said of Buttigieg that “It would be better for him if a millstone were hung around his neck and he be cast into the sea than that he should cause one of these little ones to sin.”

In other words, the pastor would rather Buttigieg be killed than that he respond to a child struggling with a question of identity in an often bigoted world.

Yet on Monday, Holmes will speak to the AIPAC audience.

He will likely receive a warm welcome from most attending because support for Israel is more important to them than whether a speaker is bigoted against Muslims or anyone else.

Speaking at @AIPAC this year is Myles Holmes who has a lengthy history of racist, antisemitic, homophobic, and islamophobic behavior.

How can any Jewish communal leader say that AIPAC isn’t fostering bigotry by inviting him? pic.twitter.com/0bXl307D6S

Sharing the AIPAC platform with Holmes will be Buttigieg himself – via a video message.

On Sunday night, Buttigieg announced he was dropping out of the race, though he will still presumably address AIPAC.

Maybe Buttigieg does not know about Holmes’ vicious attack, or maybe he will do whatever it takes to curry favor with the pro-Israel lobby, even as AIPAC lends its platform to a man suggesting he should face torture and death.

Now that this information is public, Buttigieg will have a decision to make: Chase the future votes and campaign donations of anti-Palestinian racists at AIPAC or reject the bigotry the Israel lobby group is offering from its platform.

Holmes will not be alone at AIPAC.

Other anti-Muslim bigots are attending the 1-3 March conference, most notably Serbian President Aleksandar Vucic, who said, “For every Serb killed, we will kill 100 Muslims.”

Vucic uttered these words just days before the genocide by Bosnian Serb military forces of thousands of Muslim men and boys in the Bosnian town of Srebrenica.

Vučić is a genocide denier who served as Minister of Information under Milošević, where he persecuted and killed journalists.

Famous quotes include: “For every Serb killed, we will kill 100 Muslims.”

Attending AIPAC legitimizes the platform they give bigots like him. #SkipAIPAC https://t.co/WnpKT4XpX4

AIPAC advertises itself as one of the few successful bipartisan organizations in Washington.

But in reality it has been losing Democratic support as presidential candidates Bernie Sanders and Elizabeth Warren skip its conference while expressing varying degrees of dissent from its policies.

AIPAC’s invitation to Holmes backs up the case Sanders made for not attending – that the lobby group provides a platform for bigotry.

The Israeli people have the right to live in peace and security. So do the Palestinian people. I remain concerned about the platform AIPAC provides for leaders who express bigotry and oppose basic Palestinian rights. For that reason I will not attend their conference. 1/2

For his rejection of AIPAC’s hatemongering, Sanders was attacked by some of the most anti-Palestinian politicians and leaders from across the political spectrum.

In less than 24 hours, we will open our doors for the largest Policy Conference in AIPAC’s history. 18,000 pro-Israel Americans, Democrats and Republicans, will come together to advance the U.S.-Israel relationship. #AIPACProud pic.twitter.com/69u1fIabXK

Many of these politicians would claim they’re for equal rights at home or in other countries, but when it comes to Palestinians they have repeatedly ignored their rights or actively undercut them.

Congresswoman Betty McCollum did commend Sanders and Warren for skipping the AIPAC conference.

This came after McCollum recently denounced AIPAC as a “hate group” – uncharacteristically strong language from an American politician.

Mike Bloomberg will be at AIPAC in person, while Joe Biden and Amy Klobuchar will deliver video messages.

As a long-time senator and then vice-president, Biden has spent his career helping to fund Israel’s occupation and subjugation of Palestinians.

RIGHT NOW: young Jewish activists and their allies are shutting down Joe Biden’s headquarters in Philadelphia.

By doing so, they signal to constituents that they are not troubled by Israel’s occupation of Palestinian territory and certainly not upset enough by the lack of Palestinian freedom to do anything about it.

There are 23 Democratic members of Congress scheduled to address AIPAC plus two Democratic staffers.

Only 13 Republican members are expected to speak.

Bipartisanship in Washington, it seems, finds a home in rejecting any serious effort to advance Palestinian rights and freedom.

AIPAC, which is desperate to shore up Democratic support even as it attacks leading progressive Democrats, has seemingly successfully secured Democratic backing for another year.

But the gap continues to grow between grassroots Democrats and their elected officials.

Democratic politicians flocking to the conference may one day have to face constituents fed up with their representatives’ embrace of an organization giving a platform to so much hatred.

November’s election could serve as one such occasion.