The official Covid-19 death toll in the United States continues to climb, now exceeding 14,000, with at least hundreds of thousands more infected. Under these circumstances, the federal government has found it opportune to reignite the “Fake News” scare, censuring two familiar foes: Russia and China. 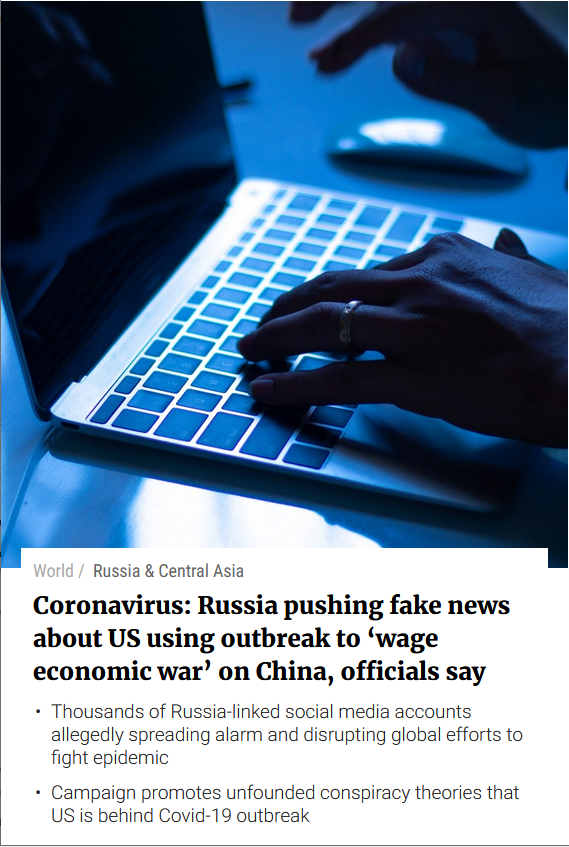 Before most in the West began worrying about the coronavirus, Agence France-Presse (2/23/20) asserted, with the US State Department as its sole source, that the Kremlin had been disseminating “anti-Western” information about the pathogen on social media in order to subvert Washington. Shortly after, the Washington Post (3/5/20) declared that “swarms of online, false personas” from Russia peddled “conspiracy theories” about Covid-19 in the US, again citing the State Department. The New York Times (3/28/20) followed with an ostensible bombshell report that Russia and China sought to “sow doubts about the United States’ handling of the crisis and deflect attention from their own struggles with the pandemic.”

Curiously, none of these articles presented proof of such nefarious online activity, instead relying chiefly on commentary and “unreleased reports” from US intelligence officials and neoconservative projects like the Alliance for Securing Democracy. An additional Washington Post story (2/29/20) reported that the State Department had discovered millions of suspicious tweets,

raising the specter that foreign governments or other malicious actors may have deliberately tried to sow fear and discord about the international health emergency—much as Russian agents had done during the 2016 presidential election in the United States.

Yet the Post by its own account found neither evidence nor so much as a mention of Russia in the State Department documents it reviewed—a lack of documentation that, in theory, should have precluded the article’s publication.

While the foreign misinformation in question isn’t clear, the purpose of the domestic narratives surrounding said misinformation is. If these reports are to be believed, the US is an innocent victim of smears by overseas actors who thwart its attempts at beneficence.

February’s Agence France-Presse article, for example, blamed the “disinformation campaign” for instilling suspicion of the West in people in Africa and Asia, thus hindering the US’s ability to effectively respond to Covid-19 outbreaks. The reality, of course, is that the US isn’t exactlyknown for its history of altruism toward Africa and Asia, and any distrust of the West on those continents existed long before the pandemic’s onset. That, however, hasn’t deterred the State Department, or its media stenographers, in their quest for an easy scapegoat. 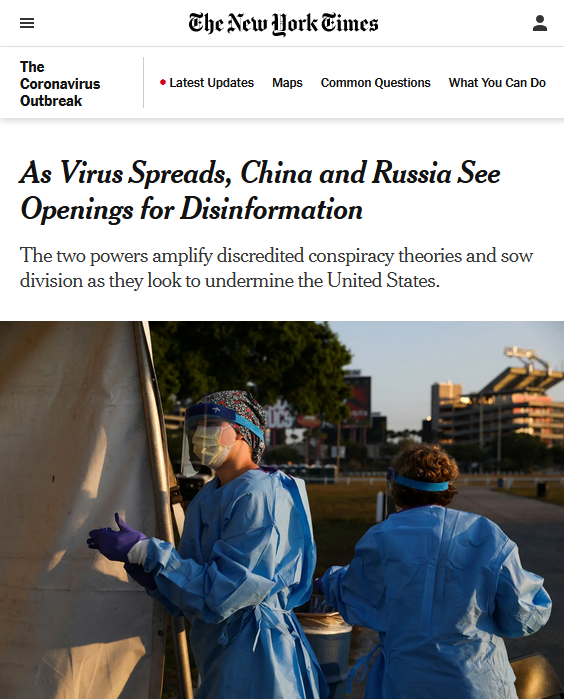 The New York Times (3/28/20) dubiously asserts that it’s China that needs to “sow doubts about the United States’ handling of the crisis” in order to “deflect attention from their own struggles with the pandemic.”

Relatedly, the New York Times (3/28/20) contended that China has amplified multiple anti-US conspiracy theories in Africa and the West, and now threatens to betray its potential Covid-related détente with the peace-seeking United States. Yet China hasn’t indicated that it wouldn’t cooperate with the US on Covid-19 containment efforts. Quite the contrary: China has provided New York, New Jersey, Connecticut and other US states with gloves, N95 masks, gowns and other medical supplies, continuing to manufacture healthcare equipment as it recovers from the epidemic (New York Times, 3/29/20).

Russia, too, recently sent ventilators, personal protective equipment and other desperately needed supplies to the US, despite the sanctions imposed on it by the US. Unwilling to accept this as anything other than an opportunistic ploy, CNN (4/2/20) described the delivery as a “propaganda win for the Kremlin” that left the story’s sole sources — former State Department officials and US think-tank top brass—“mystified” and “bemused.”

There’s a patent irony here: The State Department is impugning enemies in order to distract from its own policy failures—exactly what it’s accusing those enemies of.

The US has known of the threat of the virus since at least late December 2019, when the World Health Organization was first informed of a “pneumonia of unknown cause” in China. Soon after, leading Western media reported that a “pneumonia-like” illness had infected residents of the Chinese province of Hubei (Bloomberg, 1/4/20; New York Times, 1/6/20; Washington Post, 1/7/20; NBC News, 1/9/20). In January, China swiftly marshaled government resources to construct dedicated hospitals with isolation units (CGTN, 1/24/20; New York Times, 3/19/20) and developed a regimen of quarantines, travel restrictions and comprehensive testing. As of mid-March, new cases had slowed dramatically, with estimates that its methods prevented cases from increasing by 67-fold (Nature, 3/17/20). On April 7, China reported no new deaths from Covid-19 (BBC, 4/7/20). 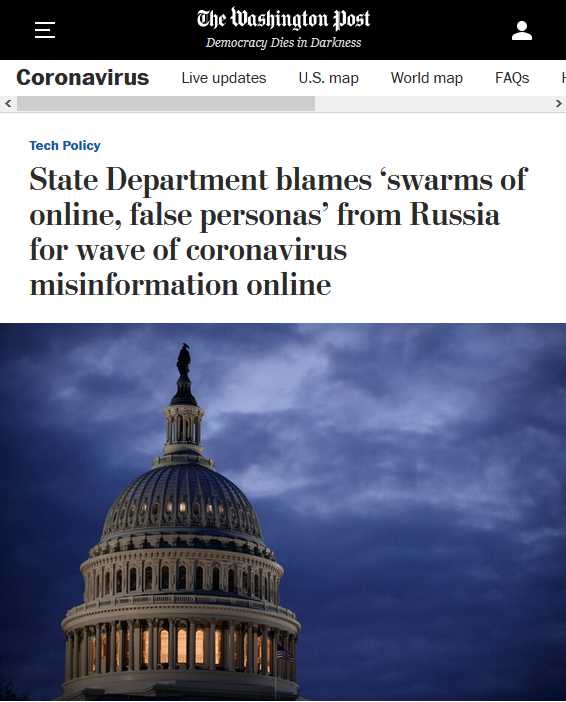 Despite the many lessons the US could have learned from China, the US has floundered in its response. The Trump administration has effectively refused to implement Covid-related public-health policies on the federal level, deferring to the sluggish, fragmented and inconsistent mandates of state and municipal governments. Meanwhile, deaths, new cases and unemployment continue to surge; testing is woefully limited; and hospitals are strangulated. Pointing the proverbial finger at Official State Enemies—particularly China, whose approach has garnered acclaim from the World Health Organization, and which is poised to emerge from this crisis economically far stronger than the US—thus serves as a highly necessary distraction.

Given the media’s tenor regarding China’s victories, this might not come as a surprise. With some exceptions (New York Times, 3/4/20, 3/13/20; Bloomberg, 3/11/20), Western media are still largely loath to acknowledge the success of China’s approach, continuing to insist that the country is minimizing its death counts based on “secret” US intelligence reports (Bloomberg, 4/1/20; Foreign Policy, 4/1/20; New York, 4/1/20; see FAIR.org, 4/2/20). Interestingly, none of these articles mentioned that the US’s aforementioned testing deficiencies are most likely rendering a massive undercount of Covid-19 cases and deaths.

Bloomberg and New York, however, made sure to attribute the US’s lack of preparedness in part to China’s alleged undercounts—citing Deborah Birx, an immunologist employed by none other than the US State Department.