ÖŞK: The protests started after George Floyd’s death continue all over the United States. Do you think these protests will fuel the will to organize among the working-class people? Can the energy coming out of the protests be persistent? What are the obstacles?

JBF: It is important to recognize the sheer scale of these protests, which have taken the form of a vast social explosion, almost a national uprising. During the famous March on Washington in 1963 when Martin Luther King, Jr. presented his “I Have a Dream” speech around 200,000 people had joined the March. Today, following the public lynching of George Floyd, there are millions of people in the streets with mass demonstrations and riots extending for weeks, and with more two-thirds of the population in the country in support. Over 150 cities in the United States have seen major protests along with hundreds of small towns. What mainly differentiates these protests from those of the 1960s Civil Rights struggles—and indeed going back as far as the U.S. Civil War—is that white workers and activists in unprecedented numbers have crossed the color line, joining black workers and other peoples of color. This is why the George Floyd protests are often called solidarity protests. The protests are a response to the repressive structure of U.S. racial capitalism. A few days ago, on what is known as Juneteenth (marking the end of slavery in Texas—the last state in the Confederacy in which it still remained—on June 19, 1865) the International Longshore and Warehouse Union, shut down the ports on the entire West Coast of the country. This was a working-class action. Speaking in an Oakland, California rally on Juneteenth, filmmaker Boots Riley said that workers should shut the system down until their demands were met. In this sense, class action is seen not as subsuming the struggle over racism (as was the case so many times in the past), but rather as a way of bringing to bear the enormous power from below in a common ground of struggle, in which breaking the repressive power of racial capitalism in all of its forms is seen as the primary strategic goal. 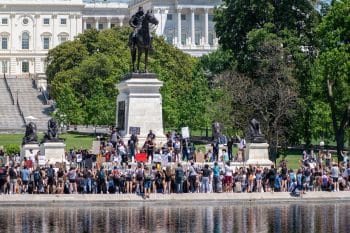 Where the movement will go now is hard to tell. There is enormous consciousness-raising going on in the society, where days have suddenly become like years. The movement to defund the police is gaining ground. Yet, the obstacles to a further radicalization and a more organized movement are enormous. The ruling class and the power elite in the United States are doing their best to coopt the protests, since the movement is at this moment too large, too popular, too radical, and too volatile for them to control. The presidential elections could play a part in weakening and diverting the struggle. The danger is that if the dissent were to die down sufficiently, we could expect renewed repression, reaching a more virulent level than before. As to the attitude that the movement itself should adopt, I am reminded of the words of the Black Panther leader Fred Hampton, who was killed at age 21 in his bed by Chicago police and the FBI in 1969: “We don’t think you fight fire with fire best. We think you fight fire with water best. We’re going to fight racism not with racism, but we’re going to fight with solidarity. We say we’re not going to fight capitalism with black capitalism, but we’re going to fight it with socialism.”

ÖŞK: U.S. President Donald Trump revived his re-election campaign and one of his main targets is the ‘left’. What does the November election mean for working class people that are facing dire economic and social situations and unemployment with the pandemic? Will Trump answer to the unemployment, economic collapse, the broad crisis of capitalism with neofascist methods? What will Trump do to overcome the crisis? What will his agenda be?

JBF: Trump is a gangster who was able to take advantage of a developing political formation that we can call neofascism, involving an active alliance of monopoly-finance capital with the white lower-middle class and white evangelicals. Meanwhile, the Democrat leadership used their corporate ties and control of the primary process to ensure that Bernie Sanders, who represented a genuine alternative, was pushed out of the race. The consequence is that the U.S. electorate has the “choice” between a right-wing, neoliberal Democrat in Biden and a gangster-neofascist in Trump. This situation, marking the growing crisis of the U.S. state apparatus, is a factor in the widespread uprisings. So far, the loser, as far as the political process goes, appears to be Trump, whose popularity has fallen in the last few months and who has recently been losing some of his support white evangelicals. The combination of a disastrous handling of the COVID-19 pandemic, an economic depression, and  an unprecedented revolt against racial capitalism in the country, led by Black Lives Matter, has finally punctured the white supremacist electoral strategy of the Trump administration.

Under the circumstances, it is at least conceivable that Trump’s support from big capital will recede as well, despite the vast handouts he has given to the wealthy and too-big-to-fail corporations. The Biden campaign strategy has thus been to make doubly sure the corporate interests understand that nothing will change for them financially or in any other way if he were to be elected. Hence, Biden went so far as to assure a gathering of wealthy donors at a ritzy New York fundraiser in mid-June (in the midst of the mass protests): “We can disagree in the margins but the truth of the matter is that it is all within our wheelhouse and nobody has to be punished.  No one’s standard of living will change, nothing would fundamentally change.” This was a promise to maintain the status quo for the wealthy and the corporations. It may be that Trump will be seen by the billionaire class and their hangers-on as having gone too far and they will shift the bulk of their support to the neoliberal right-wing Democrats represented by Biden as better securing their long-term interests. But it is too soon to arrive at such a conclusion.

Neofascism has its source in monopoly-finance capital, at the apex of the system, but depends for its existence on the ability to mobilize, with the help of a führer-like figure such as Trump, a very considerable part of the overall population, constituting its political base: namely, the lower-middle class, which in the United States constitutes some 25-30 percent of the population and represents a much higher percentage of those who vote. This is coupled with the backing obtained from some of the more privileged sectors of the white working class. With the vast majority of the white electorate of the U.S. South in rock-bottom support of Trump, he is hardly out of the picture. Meanwhile, the U.S. ruling class has seen its share of wealth skyrocket under his administration and thus leans toward Trump and the Republicans. Plus, there is the enormous power of the presidency, the ability to start a war to get people to gather around the flag. Moreover, if Biden were to win the election, it would only mean electing the lesser evil. At this point the evil represented by the leadership of both political parties is vast.

JBF: There is a lot of jockeying for position. The Trump administration has attacked the capitalist media and the Internet giants from the beginning in order to force a kind of Gleichschaltung (or bringing into line). And they have been amazingly successful in getting the media and the tech giants to toe the line. There a lot of false skirmishes. The struggles are essentially between those of the “warring brothers” of neoliberalism and neofascism. It is widely believed, based on news reports of the last week, that Mark Zuckerberg of Facebook has made a deal, a kind of nonaggression treaty with the Trump interests, in which Facebook won’t interfere with the Trump campaign no matter how venomous and racist it becomes, while the Trump administration for its part is singling out Facebook as free from any governmental regulation (including not interfering with their ownership of WhatsApp and Instagram). There is a kind of “honor among thieves” operating here. Facebook and Twitter have both been going after the left. Twitter just shut down 170,000 accounts favorable to the Chinese government, in a move that must have pleased the Trump administration. The level of cronyism in the state and capital and the overall level of corruption in the United States is probably greater than any time in the last century or more. All of this makes a fully empowered movement from below all the more important.

About John Bellamy Foster
John Bellamy Foster, professor of sociology at the University of Oregon, is editor of Monthly Review, an independent socialist magazine published monthly in New York City. His research is devoted to critical inquiries into theory and history, focusing primarily on the economic, political and ecological contradictions of capitalism, but also encompassing the wider realm of social theory as a whole. He has published numerous articles and books focusing on the political economy of capitalism and the economic crisis, ecology and the ecological crisis, and Marxist theory: (with Paul Burkett) Marx and the Earth: An Anti-Critique (2016); The Theory of Monopoly Capitalism: An Elaboration of Marxian Political Economy (New Edition, 2014); (with Robert W. McChesney) The Endless Crisis: How Monopoly-Finance Capital Produces Stagnation and Upheaval from the USA to China (2012); (with Fred Magdoff) What Every Environmentalist Needs to Know About Capitalism: A Citizen’s Guide to Capitalism and the Environment (2011); (with Brett Clark and Richard York) The Ecological Rift: Capitalism’s War on the Earth (2009); (with Fred Magdoff) The Great Financial Crisis: Causes and Consequences (2009); The Ecological Revolution: Making Peace with the Planet (2009); (with Brett Clark and Richard York) Critique of Intelligent Design: Materialism versus Creationism from Antiquity to the Present (2008); Ecology Against Capitalism (2002); Marx’s Ecology: Materialism and Nature (2000); (with Frederick H. Buttel and Fred Magdoff) Hungry for Profit: The Agribusiness Threat to Farmers, Food, and the Environment (2000); The Vulnerable Planet: A Short Economic History of the Environment (1999); (with Ellen Meiksins Wood and Robert W. McChesney) Capitalism and the Information Age: The Political Economy of the Global Communication Revolution (1998); (with Ellen Meiksins Wood) In Defense of History: Marxism and the Postmodern Agenda (1997); The Theory of Monopoly Capitalism: An Elaboration of Marxian Political Economy (1986); (with Henryk Szlajfer) The Faltering Economy: The Problem of Accumulation Under Monopoly Capitalism (1984). His work is published in at least twenty-five languages. Visit johnbellamyfoster.org for a collection of most of Foster’s works currently available online.