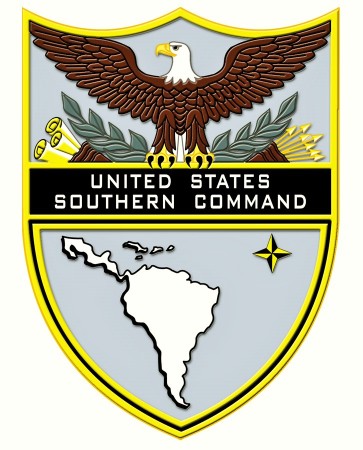 Last week, the head of the Pentagon’s Southern Command, Admiral Craig Faller, concluded his farewell tour in the Dominican Republic, participating in the Caribbean Nations Security Conference (CANSEC) together with military leaders from countries committed to Washington’s objectives of isolating Cuba, Venezuela and Nicaragua, and at the same time hindering and/or restricting the cooperation links of China and Russia with the region.

A month ago, Admiral Faller appeared before the Senate Defense Activities Oversight Committee in Washington to offer his vision of the situation in the area that the Pentagon claims to be its sovereign responsibility, as shown on the shield displayed by the Command.

South America in the clutches of SOUTHCOM

In a March 16 report, the SOUTHCOM chief warned lawmakers: “This hemisphere is under attack. The democratic principles and values that unite us are being actively undermined by violent Transnational Criminal Organizations (TCOs), the People’s Republic of China and Russia.” He further added: “We are losing our positional advantage in this hemisphere and immediate action is needed to reverse this trend.” According to Faller’s position, the threats identified include malevolent Regional State Actors (RSAs) – such as Cuba, Venezuela and Nicaragua – that perpetuate corruption and challenge freedom, opening the door to Russia and China.

Faller asked the Senate for specific funding to deploy military attachés to embassies, given that “in the hemisphere it is better not to have permanent bases but places where we can move in and out and work with our partners in their training and readiness.” In the same report, he warned that “another capability needed to outmaneuver our adversaries in the region is intelligence. We must gather intelligence across the board and share it with our partners if possible.”

The report provided by Faller was the last of his tenure. President Joe Biden announced last March 8 that the next head of Southern Command will be retired Lt. Gen. Laura Richardson.

SOUTHCOM is one of the nine military commands into which the U.S. military force is divided, and comprises an area of influence from Mexico to Antarctica, with headquarters in Miami (Mexico corresponds to the Northern Command). On the day of Richardson’s nomination, during an event at the White House attended by Biden, Vice President Kamala Harris and Secretary of Defense Lloyd Austin, efforts were made to portray a false gender perspective, in keeping with the current emblems of cultural neoliberalism. The presentation of Richardson and the new head of the Air Force, General Jacqueline Von Ovost, were part of that effort to disguise the explicitly warlike emphasis of Washington’s foreign policy, totally alien to an ethic of care, the historical praxis of women’s resistance to the model of appropriation and control of territories and bodies.

The globalist model of the Democrats seeks to legitimize itself on the basis of the promotion of diversity and the validation of human rights, while overacting an argumentative firmness apt to be digested by the still-embattled Trumpism. From this perspective, Biden appeals demagogically – as Obama did before him – to the iconography of civil liberties in order to encourage the agitators of the Hong Kong Special Administrative Region and to promote, at the same time, the secessionism of the Muslim minority of the Uyghurs, in the Sinkiang region. To this end, different NGOs and foundations are working intensively in both territories, empowering and financing disgruntled groups and the media that provide them with coverage and dissemination.

The geopolitical confrontation has been raised by Washington in the face of the incessant growth of Beijing’s economy and the strengthening of its technological capabilities. While the State Department seeks to make invisible the deterioration of its competitiveness in the most dynamic productive areas, it persists in covering up the conflict as a clash of civilizations between democracies and autocracies. However, the causes that explain the State Department’s positioning basically refer to the fact that in 2019 China surpassed the United States as the main trading partner of four countries in the region (Brazil, Chile, Peru and Uruguay), and that Beijing climbed to second place as the region’s global partner behind Washington.

Between 2002 and 2019, Beijing’s trade with Latin America and the Caribbean rose from $17 billion to $315 billion. And since the pandemic set in in 2020, China committed $1 billion in loans to purchase health supplies, improve medical infrastructure and provide vaccines to deal with Covid-19. During the same period, Washington provided the region with financing for a tenth of the amount granted by Beijing, some 100 million dollars. Faller’s visits to Uruguay, Argentina and the Dominican Republic did not include the donation or provision of vaccines, despite the fact that Washington has a higher vaccination rate than China. China inoculated 16% of its population and the United States 60%. Since the approval of vaccines by the World Health Organization, the Asian country has diverted 50% of its total production to Southeast Asia, Africa, Latin America and the Caribbean.

Despite formidable military spending, Washington is the only member of the club of 36 richest countries that make up the Organization for Economic Cooperation and Development (OECD) that does not offer universal health coverage. Nearly 30 million lacked health insurance before the pandemic and another 25 million dropped coverage during the pandemic due to layoffs.

U.S. hostility toward the Asian giant goes back more than two decades. In the early years of this century, George W. Bush (Jr.) financed the military rearmament of Taiwan in order to generate fratricidal disputes. In 2009 Barack Obama engaged in obstructing Sino-Japanese cooperation and the Pentagon opposed Tokyo’s aspiration to close the military base in Okinawa. During Donald Trump’s presidency, the trade and technology war intensified and sanctions against companies and corporate officials multiplied. Among the latter, the board members of Huawei, the company with the largest number of patents linked to 5G technology. In order to disrupt the development of Southeast Asia, the current Biden administration continues with the objective outlined by Trump to form a Pacific NATO, articulating the 25 bases that Washington has in Japan together with the 15 it maintains in South Korea. It is intended to complete this military network with the contribution of Australia and India.

At the end of 2019, the U.S. military budget reached 732 billion dollars and that of China a third, 261 billion. Washington possesses 4,500 nuclear warheads against Beijing’s 260. The investments in military equipment made by the White House amount to more than the ten countries that follow it in terms of military financing. Its budget is 10 times higher than Russia’s and, for fiscal year 2021, it is expected to spend more than Donald Trump’s four-year term. Washington is presumed to have 800 military bases scattered around the world, dedicated to managing varied projects.

Despite the danger alleged by the leaders of the Southern Command with respect to China, in Latin America and the Caribbean, only U.S. military forces are deployed. There are seven bases in Colombia, and two in Aruba and Curacao. In Honduras, the Soto Cano Air Base operates; in Lima, the Naval Medical Research and Development and in Chile, the Fort Aguayo Training Center located in Valparaiso. They have also developed innovative programs such as the one offered at the Law International Enforcement Academies (ILEA), directly financed by the State Department, with academic support from the Department of Justice and the Pentagon, which offers training for judges, security agencies, journalists and political officials in the most innovative of the instructions deployed in the continent: legal-media warfare. Another ILEA site is in Bangkok, Thailand, where hundreds of students from the Hong Kong Special Administrative Region are trained in the art of defending human rights and resisting Beijing’s policies.

The Cold War of the 20th century was expressed in military, geographic and ideological terms, although it included the obvious structural components of an economic nature. The current conflict posed by the United States is clearly presented as productive and technological. This scenario calls into question the financial-neoliberal leadership established since the mid-1970s, when the aim was to annihilate the Welfare State and the working class that was growing within it.

During the last two centuries, capitalist logic has appealed to war in order to maximize its accumulation models. Today, this design is limited, as in the Cold War, by the overabundance of nuclear missiles. But unlike the confrontation with the USSR, when productive structures had dissimilar speeds and complexities, time does not seem to be playing in Washington’s favor. Innovation, productivity and the synergy between Science and Technology have moved from the Atlantic to the Pacific.

Antonio Gramsci objectified times of transition such as those being observed: “The old world is dying. The new is slow to appear. And in that chiaroscuro monsters emerge”.

These are the nightmares of imperialist reason.

One thought on “Southern Command Goes to War”