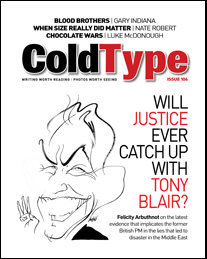 When will Tony Blair face justice? asks Felicity Arbuthnot in this issue’s cover story following the latest exposure of his lies to the British parliament before the war on Iraq. Other stories in this issue include Gary Indiana on the Boston bombers, Nate Robert on the excesses of communist monuments, Chris Hedges on fracking and revolution, and Luke McDonough on chocolate wars. We’ve also got stories on lost passports, the bombing of a hospital in Afghanistan, the naked Dr Strangelove, the walking dead, the propaganda of the Western media, Christopher Columbus and much more.

All 106 issues of ColdType are also available at
www.issuu.com/coldtype/docs