Such actions are a way to make noise and gain attention. And if they prompt the police to respond with unnecessary force, as happened on June 12, then the public will feel disapproval and disgust for the authorities.

The protesters should thoughtfully escalate nonviolence, maybe even resort to mild force, to push the government to the edge.

That was the goal of many people who surrounded and barricaded police headquarters for hours on June 21.

The protesters now use the same violent methods that were used in the Maidan protests in the Ukraine. The U.S. seems to hope that China will intervene and create a second Tianamen scene. That U.S. color revolution attempt failed but was an excellent instrument to demonize China. A repeat in Hong Kong would allow to declare a “clash of civilization” and increase ‘western’ hostility against China. But while China is prepared to intervene it is unlikely to do the U.S. that favor. Its government expressed its confidence that the local authorities will be able to handle the issue.

There are rumors that some Hong Kong oligarchs were originally behind the protests to prevent their extradition for shady deals they made in China. There may be some truth to that. China’s president Xi Jingpin is waging a fierce campaign against corruption and Hong Kong is a target rich environment for fighting that crime.

The former British colony is ruled by a handful of oligarchs who have monopolies in the housing, electricity, trade and transport markets:

The book to read is

Land and the Ruling Class in Hong Kong

(2010) by Alice Poon, which explains how the lack of competition law created outrageous wealth for the tycoons. It’s a complex subject but the key point is that in Hong Kong all land is leasehold and ultimately owned by the government, which uses it as a means of raising revenue. This goes back to the days of empire when British policy required colonies to be self-funding. The system kept taxes down and attracted business – but one side-effect was that it gave the government an interest in rationing land to keep it expensive. That didn’t matter much when the local economy comprised a few traders but, in the modern technological world of 2012, it puts the government at odds with every person and business wanting affordable space. Indeed, it induces the government to distort and damage the economy, and indeed society.

This system paved the way for a handful of Hong Kong families to become unimaginably wealthy by getting their hands on cheap land back in the days before the city started to boom.

Rents and apartment prices in Hong Kong are high. People from the mainland who buy up apartments with probably illegally gained money only increase the scarcity. This is one reason why the Cantonese speaking Hong Kong protesters spray slurs against the Mandarin speaking people from the mainland. The people in Hong Kong also grieve over their declining importance. Hong Kong lost its once important economical position. In 1993 Hong Kong’s share of China’s GDP was 27%. It is now less than a tenths of that and the city is now more or less irrelevant to mainland China. Democracy in Hong Kong is restricted to further the interests of the oligarchs:

In the 70-seat legislature, only half of the members are directly elected. The other half are selected by special interest groups—such as the financial and real estate professions—meaning that the body tends to be controlled by a mostly pro-Beijing business elite rather than by voters. The city’s Beijing-backed leader, Chief Executive Carrie Lam, likewise lacks a popular mandate.

The current protests are surely not an incentive to remove those restrictions or to invest in Hong Kong. They are counter productive.

While the protests against the extradition bill may have been backed by some tycoons, it is obvious that there is also a large U.S. government influence behind them. It is the U.S., not some oligarchs, which is behind the current rioting phase.

In 1992 Congress adopted the United States–Hong Kong Policy Act which mandates U.S. government ‘pro-democracy’ policies in Hong Kong. Some Senators and lobbyists now push for a Support Hong Kong Human Rights and Democracy Act which would intensify the interference. Before the June protests started Secretary of State (and former CIA head) Mike Pompeo met with the Hong Kong ‘pro-democracy’ leader Martin Lee and later with ‘pro-democracy’ media tycoon Jimmy Lai. The National Endowment for Democracy finances several of the groups behind the protests.

Such interference is against Hong Kong’s Basic Law:

Despite that law the U.S. National Endowment of Democracy spends millions on organizations in Hong Kong: 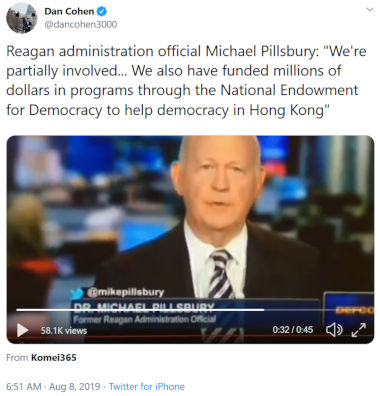 The political officer of the U.S. consulate in Hong Kong, the largest in the world, meets with notorious rabble-rousers like Yoshua Wong. 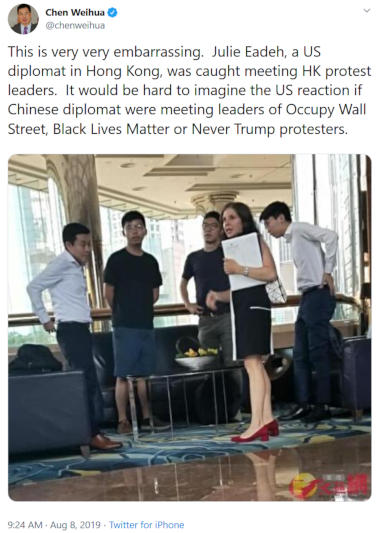 That some protesters sing the U.S. national anthem and wave U.S. flags (vid) or fire U.S. made grenade launchers (vid) will not motivate patriotic locals to join them. The protesters also fly Pepe the frog flags and use that rightwing fringe symbol on their pamphlets and flyers. It rather fits that Hillary Clinton and Dominic Raab support them.

To use the British colonial flag to call for Chinese ‘colonists’ to leave requires some brain twisting. 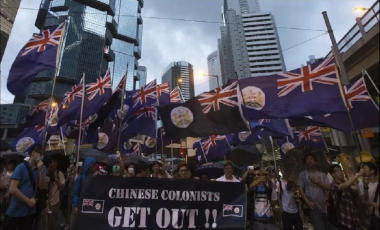 The rioters equipment comes from “strangers” who create depots of gas masks, helmets, laser pointers etc, that trusted demonstrators then distribute to their fellows. Mysteriously hundreds of subway tickets appear which are handed out for free to the junior university students who, during their current holidays, make up the mass of the violent black block that attacks the police. 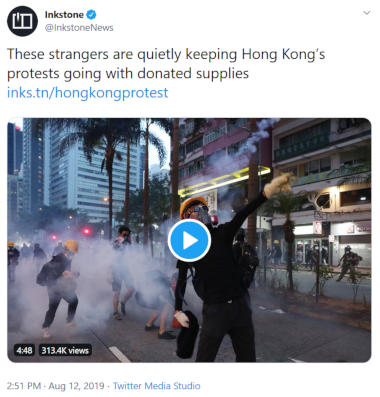 The rightwing Hong Kong Confederation of Trade Unions has long been financed by U.S. regime change organizations. That it represents the airport workers may be the reason why the protests recently escalated there. The last three days protesters blocked the Hong Kong airport and violently hindered people from departing on their booked flights.

Travelers who spoke Mandarin were attacked. The scene became extremely ugly when a journalist from the Chinese Global Times was beaten until he fainted. Protesters claimed that he was with the police and hindered paramedics from reaching and caring for the man. Only when police intervened were the first-aiders able to remove the unconscious person. One of the rioters who beat the man had a U.S. flag in his hand (vid). When the stretcher was rolled out of the airport another protester with a U.S. flag on a pole ran after it and beat the patient (vid).

James Griffith, a CNN International producer, was on the scene.

Ugly confrontation between a huge crowd of protesters and a man they believe is an undercover cop has been ongoing for over an hour now. Have zip tied the man’s hands and fighting over whether to move him. He’s collapsed twice.
…
Its all so ugly and angry and nihilistic. Asked kids who said he was faking what if he wasn’t, they said who cares. Asked what if he dies, who cares. Asked them what they think will happen if he is a cop and he dies, “so they shutdown HK? Good! We are ready for it, we want it.”
…
This was a movement famous for clearing thousands of people out of the way on the streets to let an ambulance through, now blocking a stretcher while a handful of more reasonable people in tears try to reason with them.
…
Most surreal moments have been people (seeing press vest) come up to “explain” to me things they’re clearly getting from Telegram, claiming without evidence the guy is 100% a cop because someone Googled him, or that he had weapons (different guy) or that he was faking fainting.

Read Griffiths whole thread here. There are also plenty of videos from the scene that document the ghastly behavior.

(1) man found with numchuk like weapon, released after brief confrontation and showing ID.
(2) man accused of being undercover cop, beaten and restrained with zip ties. Paramedic reached him to give him oxygen and aid after he passed out. evacuated to ambulance after 4-5 hours.
(3) man later confirmed to be Global Times reporter. Briefly restrained and then released after first aiders intervened.

Another ‘western’ journalist expressed a rather wretched understanding of freedom of the press:

What has happened with the man detained and physically abused by some protesters at the Hong Kong airport is appalling and must stop now. But he works for The Global Times, a propaganda arm of the Chinese state, and he is not a journalist and should not be called that.

The airport now received a court order that allows it to restrict further protests.

The police still holds back as much as it can. In most other countries this scene, in which a beaten policeman briefly pulls his gun, would have ended deadly.

Last month the government in Hong Kong brought a former top officer out of retirement to handle the protests. There have since been some changes in police tactics. Where previously protestors got away with building barricades and throwing stones they now get arrested and end up in jail. Undercover policemen snatched some riot leaders off the streets.

Local people increasingly turn against the rioters. Those who depend on tourism have good reason to call for a crack down on them. The violent behavior of the protesters gives the police more public leeway for harsh responses. There are many additional methods that can be used. The police refrained so far from encircling and mass arresting rioters, a tactic that is used in many other countries. Its water cannon vehicles were shown off but not put into action. The police has not yet cracked down on the communication with “strangers” even though it is likely to listen to some of it. This end phase will soon come.

There is also an automatic end date for the riots. On September 2 the new semester begins and the students will turn back to studies. The rioters will lose their critical mass. The whole issue will end up as another failure without the U.S. achieving any of its aims.

Mainland Chinese who view the chaos in Hong Kong in all its glory will now reject any talk of ‘pro-democracy’.

Responding to pressure from businesses and growing fears that a trade war is threatening the U.S. economy, the Trump administration is delaying most of the import taxes it planned to impose on Chinese goods and is dropping others altogether.

But under pressure from retailers and other businesses, President Donald Trump’s trade office said it would delay until Dec. 15 the tariffs on nearly 60% of the imports that had been set to absorb the new taxes starting Sept. 1. Among the products that will benefit from the 3½-month reprieve are such popular consumer goods as cellphones, laptops, video game consoles, some toys, computer monitors, shoes and clothing.

The administration is also removing other items from the tariff list entirely, based on what it called “health, safety, national security and other factors.”

Russia’s agriculture thrives on sales to China while U.S. farmers lose market share. The anti-Chinese part of Trump’s MAGA has yet to achieve any success.