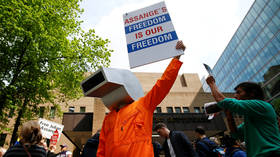 The sentence “is as shocking as it is vindictive,” WikiLeaks said on Twitter on Wednesday, shortly after Assange received almost a year in prison for violating bail conditions.
END_OF_DOCUMENT_TOKEN_TO_BE_REPLACED