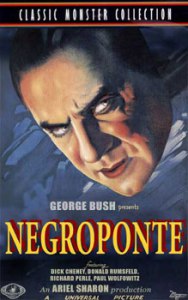 For the past couple of years a goodly section of the ‘left’ has obsessed over the ‘neo-con’ guys as if they suddenly crawled out from under a rock but as I have observed in many past essays, these guys, far from crawling out from under a rock are the long-time managers of imperialism. Their ‘pedigree’, if that’s what we can call it, extends back at least one hundred years, to at least the age of the ‘Robber Barons’ as innumerable studies illustrate all too clearly. From generation to generation, via a network of relationships borne out of financial, political, education and family ties, they are the public face of an imperial dynasty every much as entrenched as any network of European monarchs (mostly famous for bonking close relatives with the resultant genetic abnormalities and living free off the state).