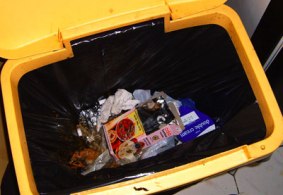 Well it’s started, in fact it’s more than started and it’s driving me mad. You know what I’m talking about, my fucking ‘carbon footprint’! Every time I hear the phrase, which is every damn day, it really pisses me off.

‘Carbon footprint’ is the new Osama, the new bogie man with which to frighten the kids. And as the campaign gathers speed, awful things happen to your mind; the ‘green virus’ infects you, there is no escape.

So last night I was in the kitchen getting a meal together and I had to open a new packet of spices and as I poured it into a container and then dumped the empty carton into the garbage can a strange feeling came over me; I was thinking about the fate of the empty carton.

Then I realised that it wasn’t the first time I’d been ‘possessed’ by the feeling whenever I threw out the crap my food comes packaged in. Bottles, wrapping, cans, every piece of junk mail, evokes the feeling that I’m fucking up the planet, even the stuff that goes into the orange recycling bag (who knows what really happens to it?).

But this is how it works isn’t it, once the media gets its hands on ‘my carbon footprint’, I’m buggered. Slowly but surely it worms its way into my consciousness. It’s not just the dedicated programming on ‘greening’ my life, every damn news broadcast has at least one piece on ‘what I can do’ to save the planet.

And it works, no matter how insulated you think you are from the predations of the media, engineered guilt worms its way into your mind. Every piece of garbage on the street; every time you see someone drop something, you want to tackle them (and get whacked for the privilege of ‘doing my bit’? Not likely).

The thing is this, it’s no bad thing to having our streets clean (people tell me that London is one of the dirtiest capital cities in the world) and it’s also true that the sheer volume of packaging our food and such comes packed in is ridiculous. This is what makes the ‘green’ propaganda campaign almost impossible to resist.

The point is however, that all of it entirely misses the target and deliberately so, for the objective is to shift the responsibility away from the economics of capitalism onto our shoulders whilst we stay loyal consumers, we’ll just consume ‘green’ crapola instead the usual crapola. And as predicted awhile back by yours truly, every damn product is now selling itself as ‘green’, even car insurance.

It’s one, giant con job and one of the major culprits is the BBC with its endless series of programmes on how ‘we’ can save the planet but not a one of them will actually raise the issue of the economics of capitalism being intrinsic to the problem, that unless this is dealt with, we’re buggered.

Earnest men with handlebar moustaches, invade our homes armed with meters to measure our electricity consumption, dig holes in the backyard to put our crap in, and all of it without mentioning the ‘c’ word.

Look they mean well these ‘green crusaders’, that’s part of the problem, for them it’s fun being green and it pays well too. Books and DVDs follow in rapid succession, in fact an entirely new industry is born and all the ‘new’ products that go with it.

Every year tens of thousands, if not millions of ‘new’ products hit the market, most don’t make it beyond one year before being consigned to the dustbin of market failures for one reason or another. And no matter whether the product is made of’ sustainable’ materials and processes or not, the sheer volume of raw materials consumed is absolutely necessary to the continuance of capitalism. Capital must reproduce itself and every market has a limit to what it can consume before it becomes saturated and a ‘new’ product has to be produced and a new market created for it.

It’s a self-perpetuating system with millions of jobs at stake, not to mention profits. Everything is interlocked and inter-dependent. Without our increasing consumption returns on investments diminish, the stockholders complain and new ways have to be found to keep the rate of return increasing. This means finding new markets, reducing the cost of production, inventing new products, ad infinitum.

How to counter this avalanche of capitalist ‘green’ propaganda? The latest Medialens piece illustrates to some degree the problem that confronts us. Titled ‘Melting Ice Sheets And Media Contradictions – An Exchange With George Monbiot’ reveals the contradictions inherent in capitalism allegedly trying to heal itself and the planet.

Monbiot is one of the very few anti-capitalist writers with access to the corporate media, principally the Guardian. The problem, as Medialens points out, is that Monbiot’s essays are immersed in advertising; for cars, air travel, booze, etc, aimed mainly at the ‘jet-set’.[1]

“Doesn’t this make a mockery of the Guardian’s claims to be responding to climate change? Is it really credible to expect a newspaper dependent on corporate advertising for 75 per cent of its revenue to seriously challenge the corporate system of which it’s a part and on which it depends? Why don’t you discuss this inherent contradiction in your journalism? — [Monbiot doesn’t] discuss this inherent contradiction in [his] journalism? — [that] the news reports, comment pieces and adverts that surround your work powerfully reinforce a ‘pathology of normalcy’ and prevent people from seeing the pathology for what it is.”

“Isn’t it vitally important that this structural problem of the corporate mass media system be exposed? Doesn’t your silence on this issue indicate the very real limits of free speech in our ‘free press’?”

Monbiot agrees but suggests that ‘alternative’ sources of revenue be found for the corporate media and invites people to send him suggestions. The problem with the idea of’ alternatives’ is that it doesn’t matter what is advertised, whether ‘green’ or not, advertising and the corporate media are one and the same thing, abolish one and effectively you abolish the other. In other words, advertising is intrinsic to the corporate press, there are no alternatives unless one pays for the actual cost of a newspaper, which few would be prepared to do. The very nature of the corporate media is determined in the first place by its reliance on advertising; it defines its choice of what is ‘news’ and how events are covered, to expect anything else is self-delusion.

Medialens notes that the Guardian has an online adverts-free edition, at a cost of course, but fails to point out that the content of this edition has already made a profit from advertising! Effectively, online versions of print media are a license to print money, all that happens is that the content has been repackaged and sold again (and again). One way or the other, corporate media are totally dependent on advertising as the major source of revenue regardless of where it comes from.

Quite correctly, Medialens points out that supporting independent, non-corporate media is one answer but we know the problems that confront such enterprises. And it doesn’t address the issue of our being immersed in an ocean of capitalist propaganda, not only the corporate press and state-run media but local councils, the education system, and of course central government and business, have all jumped on the bandwagon.

‘Fighting global warming’ has become the leitmotiv of New Labour (after the ‘war on terror’) but obviously it excludes the central contradiction of the relationship between climate change and our economic system.

But it goes much further than the issue of climate change, for all climate change has done is reveal the contradictions of capitalist economics which is why for the government and business, it’s vital that there be no exposure of the connection between the two.

To some degree, it can be argued that the issue of climate change actually masks the central problem by diverting attention away from the essential nature of the economics of capitalism which is why the central propaganda message is what you can do about your carbon footprint’. And so far the campaign has been eminently successful in passing the buck. Who amongst us and aware of the issue, hasn’t felt what I feel every time an empty carton is tossed away?

1. ‘Over the last 12 months, the GNM [Guardian News and Media] total audience accounted for: “20% of all champagne drunk. One in six of all city breaks taken. One in five Acorn ‘Urban Prosperity’. £1 in every £7 spent on computer hardware or software. 1/6 of all MP3 player expenditure.” http://www.adinfo-guardian.co.uk/display/research/total-audience/total-audience-facts.shtml