As some 500 000 Haitians still live in displaced camps, five star hotels are being built amid shanty towns.
As part of the country’s “Reconstruction”, The Clinton-Bush Haiti Fund recently invested $2 million in the Royal Oasis Hotel, a deluxe structure to be built in a poverty-stricken metropolitan area “filled with displaced-persons camps housing hundreds of thousands”. Royal Oasis belongs to a Haitian investment group (SCIOP SA) and will be managed by the Spanish chain Occidental Hotels & Resorts.

AP reported in April that funds raised by the former US Presidents to help the neediest Haitians are now being used to build a hotel for “rich foreigners” including tourists as well many foreign NGO “aid workers” currently in Haiti. (Daniel Trenton, AP: New hotels arise amid ruins in Haitian capital, Clinton Bush Haiti Fund, April 29, 2012)

It is worth noting that Western governments have insisted that aid money for Haiti be given to NGOs and foundations rather than to the Haitian government, which they consider to be “corrupt”.

In the aftermath of the January 2010 earthquake, people in the US, Canada and the EU, who made donations to those humanitarian organisations and NGOs did not realize that their contribution to Haiti‘s reconstruction would be channeled towards the building of five star hotels to house foreign businessmen. Their expectation was that the money would be used to provide food and housing for the Haitian people.

The Royal Oasis as well as other hotel projects totalling over $100 million are, according to AP, “raising hopes that thousands of [foreign] investors will soon fill their air-conditioned rooms looking to build factories and tourist infrastructure” (emphasis added)

The “10-story building […] will include an art gallery, three restaurants, a commercial bank and high-end shops. Construction on the Royal Oasis began before the earthquake and is expected to finish by the end of the year.” The earthquake was therefore a blessing for the hotel promoter and contractors, bringing $2 million dollars originally raised to “go directly to supplying these material needs [food, water, shelter, first-aid supplies]” (see add below). Among the companies involved in the construction of the Royal Oasis two are Haitian, one is Canadian (Montreal) and the other American (Miami). 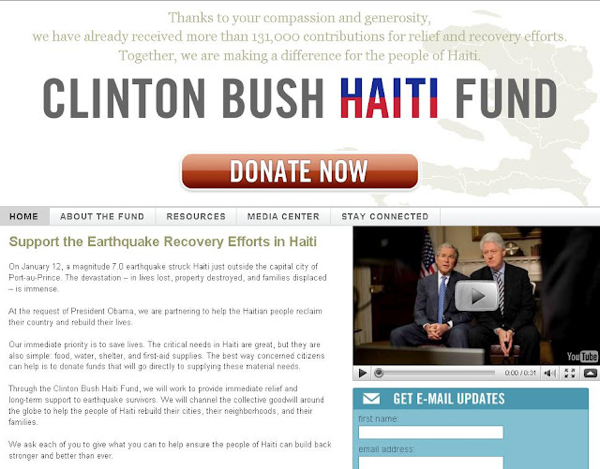 Foreign “aid” often benefits NGOs of the donor country as well as the local business elites in the recipient country. The Council on Hemispheric Affairs has blamed both Bill Clinton as well previous U.S. presidents for having maintained Haiti in conditions of “endemic poverty through a self-serving U.S. rice export policy […] By 2003, approximately 80% of all rice consumed in Haiti was imported from the United States.” (Leah Chavla, Bill Clinton’s Heavy Hand on Haiti’s Vulnerable Agricultural Economy: The American Rice Scandal, Council on Hemispheric Affairs, April 13, 2010.)

The International Finance Corporation (IFC), a division of the World Bank, has also invested $7.5 million in the project, claiming it will “create employment, generate business opportunities for small businesses and promote sustainable development.” Since 2006, $68.6 millions have been invested by IFC in the Haitian private sector. Despite those investments, the per capita GDP in Haiti has seen very little improvement during that period. There is a fine line between slavery and an average $2 a day salary, which ousted president Jean Bertrand Aristide wanted to abolish prior to his overthrow in a US-French-Canadian sponsored Coup d’Etat. (La Société Financière Internationale (IFC) investit dans un projet hôtelier en Haiti pour supporter les efforts de reconstruction, IFC, June 30, 2010.)

“The good news” is that the project will create jobs for Haitians. The Oasis foundation has also created a program to train workers for the tourism industry. The project promoter, Jerry Tardieu told AP “the new hotels will help more people get out of the camps by giving them jobs to pay for rent on homes being rehabilitated by government and non-profit organizations.” He says 600 people have been employed for the hotel’s construction and once open and running, 250 to 300 new jobs will be created. On top of the $2 million invested in the hotel, a modest grant of $264,000 goes to the “Oasis Hotel’s nonprofit arm, the Oasis Foundation […] bolstering the hospitality sector by reopening l’École Hôtelière Haitienne (the Haiti Hotel School) […] (Clinton Bush Haiti Fund, Programs: Oasis). Basically those funds are used to make comfortable hotel rooms, lounges and cafes for foreigners and “train Haitians to serve them ” in a congenial five star environment.

While, Haitiwas lacking in hotel rooms in the wake of the earthquake and job creation is a key to poverty reduction, a majority of the population still live in makeshift shelters of cardboard, scrap metal and old bed sheets. People struggle to have water to drink and food on their table — and in many cases they do not have a table. Meanwhile, the construction of luxury hotels for foreigners is a number one priority, in comparison to “housing for the locals”.

Tourism Minister Stephanie B. Villedrouin “said all of those [850] hotel rooms [destroyed in the earthquake] will have been replaced by the end of the year […] Villedrouin said Port-au-Prince officially has a 60 percent occupancy rate but many of the hotels are too rustic for international travelers [including the NGO, World Bank and USAID staff on mission to Haiti].”(AP, op cit, emphasis added)

The “international travelers” are the unspoken victims of rudimentary and rustic hotel accomodation when on mission to Haiti, according to Mariott’s executive Alejandro Acevedo. “Marriott International, …is building a $45 million, 174-room hotel [in Haiti] in partnership with mobile phone company Digicel Group.” Marriott’s Acevedo complained that “even he had to share a room with his boss on a recent visit because of the dearth of hotel space.” 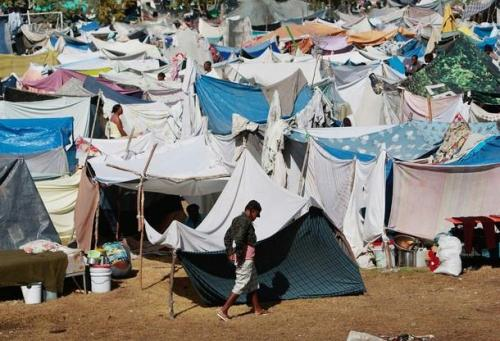 The AP report adds that the International Federation of Red Cross and Red Crescent Societies (IFRC) bought land for $10.5 million and are also thinking of building a hotel: “The money came from donations raised by national Red Cross agencies for quake recovery, causing some to wonder if the money would be better used to house displaced people rather than aid workers.” (AP, op. cit, emphasis added).

Millions of people in the US, Canada and Western Europe donated part of their savings to their local Red Cross, which was then channeled to the IFRC, the world’s largest humanitarian umbrella organization. The IFRC claims to be “providing assistance without discrimination as to nationality, race, religious beliefs, class or political opinions.” (See IFRC website, emphasis added)

This land purchase by IFRC not only violates its humantiarian mandate but also the trust of its constituent Red Cross and Red Crescent organizations worldwide. Red Cross donations should have gone supporting IFRC‘s mandate with regard to “shelter recovery and settlement planning”, in a post-disaster environment as clearly stated on theIFC website:

“Most people who have lost their homes through a disaster want to repair or rebuilt their homes as soon as possible. Many start the reconstruction process immediately after a disaster, whenever circumstances and resources permit. Shelter assistance provided by the International Federation of Red Cross and Red Crescent Societies (IFRC) recognises this, and where appropriate prioritises the provision of materials, tools, cash and technical assistance to support the process.” (emphasis added)

According to the AP report: “Signs of Haiti‘s comeback can also be seen in the 105-room Best Western hotel being built within blocks of shanty-covered hillsides.” The five star Best Western project is worth $15.7 million and is located in the plush city of Petionville. The “first US hotel in Haiti” is funded by local investors but will be managed by a Dallas firm and is expected to create 150 jobs. (Ibid.)

While several hotels are being built to provide “room and board” for potential foreign investors, very few homes are being built for locals and “the vast majority of construction has been temporary shelters with a life span between two, maximum five years”, according to Gerardo Ducos from Amnesty International. (AlertNet, op. cit.)

In order to shut down the Champ de Mars camp, which would be tantamount to the expulsion of more than 17,000 people, a controversial Haitian government program funded by Canada has been offering 500$ to dwellers who leave and find a home elsewhere. In practice this project leads to the de facto expropriation of slum dwellers in high value central downtown area of Port-au-Prince. While the amount is enough to pay the rent for a year, Ducos wonders: “What happens to the people when their rent money runs out in a year?”(Ibid.).

Will there be enough jobs for them in the hotel industry?

Will the salaries be high enough to pay the rent?

A lot of unanswered questions remain.

Julie Lévesque is a journalist and researcher with the Centre for Research on Globalization (CRG), Montreal. She he was among the first independent journalists to visit Haiti in the immediate wake of the earthquake.

URL of this article: www.globalresearch.ca/index.php?context=va&aid=31646