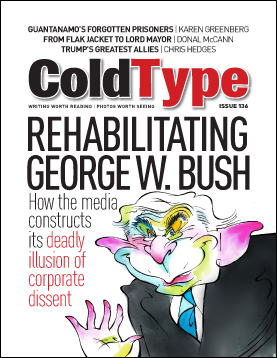 David Edwards criticises the cynical manner in which the UK media has rehabilitated George W. Bush, former US president who was responsible for the deaths of up to a million people in Iraq. In other big reads, Chris Hedges explains why America’s liberal elites are the greatest allies of President Trump, Karen Greenberg remembers the forgotten prisoners of Guantanamo, Jonathan Cook reflects on the Gaza report into the 2014 Israeli attacks, George Monbiot looks at a new world in which racism and fascism become meaningless words, and John Steppling analyses a new wave of liberal hysteria that is sweeping the USA. This issue’s photo essays feature Dónal McCann’s photos from Máirtín Ó Muilleoir’s year as Lord Mayor of Belfast, and Ron Fassbender’s images of a massive demonstration in London against plans for the nation’s health service. In our Insights section, we have stories about peeing in swimming pools, media hypocrisy, the Russian devil, the CIA and the Oscar awards.

Read this issue online at https://issuu.com/coldtype/docs/ct136.midmarch2017

All 136 issues of ColdType are also available at
www.issuu.com/coldtype