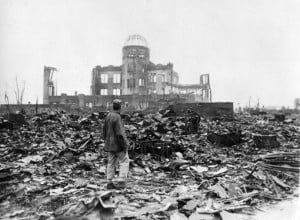 The Satanic Nature of the Atomic Bombings of Hiroshima and Nagasaki

When on August 6 and 9, 1945 the United States killed 200-300 thousand innocent Japanese civilians with atomic bombs in Hiroshima and Nagasaki, they did so intentionally.  It was an act of sinister state terrorism, unprecedented by the nature of the weapons but not by the slaughter. The American terror bombings of Japanese cities that preceded the atomic bombings of Hiroshima and Nagasaki – led by the infamous Major General Curtis LeMay – were also intentionally aimed at Japanese civilians and killed hundreds of thousands of them.  END_OF_DOCUMENT_TOKEN_TO_BE_REPLACED