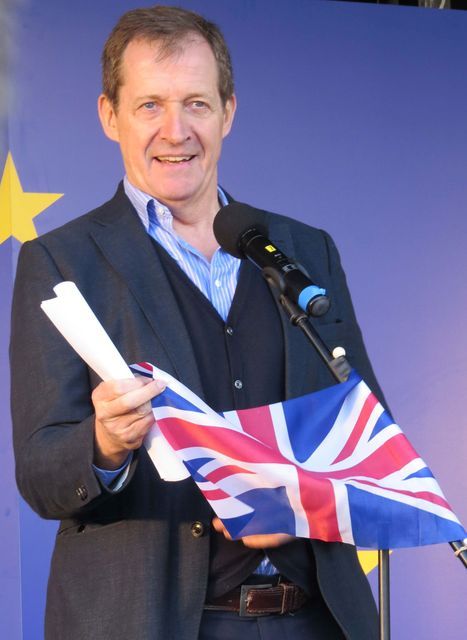 Campbell is one of the most hated figures in British politics. An unindicted war criminal alongside Blair, he was a key architect in concocting the lies about Iraq’s possessing Weapons of Mass Destruction that were used to justify an illegal war of aggression that has cost over a million lives.

Campbell was identified by United Nations weapons inspector and whistleblower Dr David Kelly as being responsible for “sexing up” the infamous “dodgy dossier” claiming that Iraq posed an imminent threat to the UK. Kelly was identified as the source of a report by Andrew Gilligan and called before the Foreign Affairs Select Committee on July 15, 2003. Two days later, he was found dead in a remote location near his home, having supposedly committed suicide.

Campbell announced his resignation in a letter to Labour leader Jeremy Corbyn that was published in the New European, a pro-European Union (EU) weekly of which he is editor-at-large.

Campbell was expelled from the party in May after announcing during an interview immediately following the European election that he had voted Liberal Democrat. The Lib Dems campaigned in the election on a platform for the UK to remain in the EU and for a “People’s Vote” second referendum. Campbell tweets under the tag Alastair PEOPLE’S VOTE Campbell.

Labour’s constitution states any member “who joins and/or supports a political organisation other than an official Labour group or other unit of the Party” will “automatically be ineligible to be or remain a Party member.” Pro-Corbyn members have been expelled on the pretext of merely retweeting statements by Green Party candidates and other non-party figures such as George Galloway.

Campbell’s expulsion prompted furious denunciations from the Labour right, who held him up as a martyr as part of their offensive to reverse Corbyn’s declared policy that Labour had to respect the result of the 2016 referendum to leave the EU. The Blairites insisted that Labour could no longer just hold out the prospect of backing a future referendum, but had to become the main pro-Remain party in an emerging anti-Brexit alliance with the Lib Dems, Scottish National Party and the Greens. Campbell’s letter declared he voted Liberal Democrat “in an effort to pressure you [Corbyn] to a clearer anti-Brexit, pro-second referendum position.”

At that stage, Campbell said he would appeal his expulsion and possibly take legal action. He has now judged that departing will inflict maximum political damage to Corbyn. His open letter was a call to the Blairites who remain in the party to continue their struggle to remove Corbyn, using the bogus pretext that he and his “leftist” politics and support for the Palestinians against Israeli oppression breeds anti-Semitism. Campbell is free to work openly outside the party to build a cross party pro-EU alliance on behalf of the dominant sections of the ruling elite who fear the loss of access to the Single Market and Customs Union.

Amid his panegyrics to Blair, Campbell’s letter again exposes the servility and political cowardice of the Corbyn leadership. Campbell reveals that, behind the backs of Labour members, Corbyn’s office has spent every moment since he was expelled trying to tempt him back in.

The letter states, “As you may know, representatives of your office recently asked me to a meeting with [Executive Director of the Leader’s Office] Karie Murphy, to discuss how we might find a way of me getting back into the party without political embarrassment. Unfortunately, the call came as I was about to leave for Australia, so we agreed to wait until my return.”

Campbell details the assistance he received from Corbyn’s main ally, Shadow Chancellor John McDonnell, writing, “Having first lodged my own appeal, but then failed to get answers to questions about due process, despite help from my MP, Keir Starmer, John McDonnell and others, I asked lawyers to take over.”

Campbell continues, “I was told that my case had been discussed with Ms Murphy and other senior members of your team and that they saw two ways it might be addressed – 1. By a suspension of my auto-exclusion under cover of the broader possible review of the whole AE [automatic expulsion] system in relation to anti-semitism and other offences. 2. That I make some kind of public commitment to voting Labour at the next election, and to ‘abiding by the party rules’ (rules which, incidentally, I do not believe I have ever broken.)”

Despite these overtures, Campbell writes that he had decided to join his partner, Fiona Millar, who left the party a year ago, “even if I should be successful in my appeal or legal challenge.” There was no way he would commit to voting for Labour in the future given Corbyn’s refusal to unambiguously back the UK remaining in the EU.

To underscore his venal role, Corbyn, when asked about Campbell on a visit to Lancashire, replied that he was “disappointed when anyone resigns or leaves.” He spoke shortly after Shadow Climate Minister Danielle Rowley insisted—even as Campbell’s letter railed against the “sectarian, hard left, out of date politics” advocated by Corbyn and backed by “extremist elements”—that there was still a place for Campbell and other Blairite renegades. “The Labour Party has always been and remains a broad church—there’s lots of different viewpoints … I’d like it if he could get on board, but it seems he really doesn’t want to do that.”

That Corbyn’s office sought to restore Campbell to membership via proposed changes in the party’s disciplinary rules is significant. These changes were demanded by the Blairites, who insisted that those accused of “anti-Semitism” must be subject to “automatic expulsion.” Last week, these changes were brought in, with Corbyn laying the basis for the expulsion of his own supporters.

This sordid episode reveals the contrast between the Corbynites, who demand above all else unity with the right-wing, and the vast bulk of Labour’s membership, who hate Blair, Campbell and their ilk and want them expelled.

In response to Campbell’s letter a selection of postings on Twitter read:

“Our beloved media have paraded Alastair Campbell around today like some kind of war hero rather than the war criminal he is. If he and Blair were subject to justice in the same way the Nazis were at Nuremberg, they would be hanged.”

“I no longer want Alastair Campbell to be a member of the Labour Party. I want the whole Blair coterie held to account for their role in the invasion of Iraq, the consequences of which have rippled out through the world.”

“Alastair Campbell is a warmonger and war criminal. His ‘sexed up’ dossier set the grounds for the invasion of Iraq.”

“Serial liar Alastair Campbell was expelled from the party, he didn’t leave on principle. Labour members are ecstatic.”

Despite the orchestrated departure of a few of their number, the Blairites still rule the Labour Party because of the refusal of the Corbynite “left” to oppose them. Another key Blairite, Lord Peter Mandelson (infamous for his statement that he was “intensely relaxed” about people getting “filthy rich”), continued the right’s offensive Wednesday in an interview with the Italian newspaper La Stampa. Claiming there were “thousands” of Labour members who carry the “virus” of “anti-Jewish racism,” he said, “I feel dirty. I feel dirty being in a party that is prepared to tolerate people with such opinions as these. It’s disgusting.”

Mandelson knows that he faces no threat from those he considers “dirty” and “disgusting,” because he is protected by Corbyn.