The G7 meeting held in France over the weekend marks another stage in the breakdown of the post-war capitalist order with the major imperialist powers becoming embroiled in a series of conflicts of the kind that led to the outbreak of World War II eighty years ago.

The G7 was set up in 1975 as a mechanism to develop international economic collaboration and coordination in the face of what was, to that point, the most serious recession in the global capitalist economy since the Great Depression of the 1930s.

Today, in the midst of a very much more serious situation, as the global economy is ripped apart by deepening trade war, growing signs of recession, amid rising concerns over the instability of the international financial system, the very discussion of these issues has become the focus of conflict.

Before the meeting had even begun, officials of the Trump administration issued criticisms of the agenda drawn up by French President Emmanuel Macron as the host of this year’s gathering. They said it had been devised to focus on “niche issues” such as climate change and developments in Africa in order to “fracture the G7,” isolate the US and appeal to Macron’s electoral base. 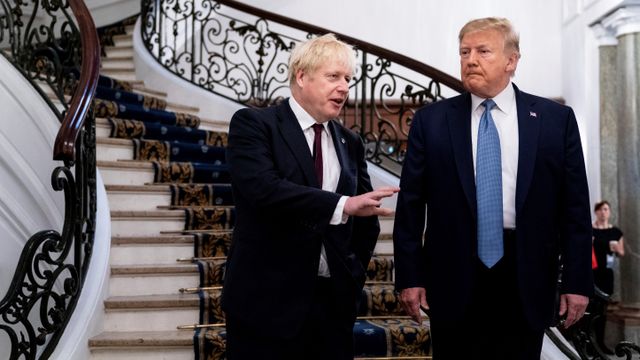 In a piece published in the Wall Street Journal, the director of the White House National Economic Council, Larry Kudlow, said a formal session on the economy and trade had only been included at the last minute at the request of the US and the agenda drawn up by Macron had been designed to produce “politically correct bromides.”

Such is the level of tensions, Macron declared in the lead-up to the summit, that the practice of issuing a formal communiqué summing up the discussion would be abandoned because no one took any notice of them and they were only studied to determine the points of difference.

As he was preparing his departure for the summit, Trump escalated those tensions with the announcement that his administration would increase tariffs against China and that “great American companies are hereby ordered to immediately start looking for an alternative to China.”

The “order” was largely dismissed as an example of overreach by the president and laughed off in the American media and sections of the political establishment because it was claimed he did not have the power to enforce such a directive which could only be employed under conditions of war.

Trump responded that he did hold such power.

“For all the Fake News Reporters that don’t have a clue as to what the law is relative to Presidential powers, China etc., try looking at the [International] Economic Powers Act [IEEPA] of 1977. Case closed,” he tweeted.

Speaking on “Fox News Sunday,” Treasury Secretary Steven Mnuchin said Trump did have the power to force US companies to quit China under the IEEPA if he declared an emergency. This position was supported by Kudlow in an interview on CNN’s “State of the Union” program but he said there was “nothing right now in the cards” that he would do so.

However, action under the IEEPA, which has been described as the “nuclear option,” has already been considered. Trump threatened to invoke it in May when the administration said it would impose tariffs against Mexico unless it took action to halt the flow of immigrants and refugees into the US.

On Sunday morning, comments by Trump that he was having “second thoughts” about the imposition tariffs on China was taken to mean he was regretting the escalation last week. That was quickly squashed by a White House spokesperson who said the president’s answer to a question had been “greatly misinterpreted.”

“President Trump responded in the affirmative—because he regrets not raising the tariffs higher,” the spokesperson said.

China is not the sole target of US trade war measures. Trump has warned that if France goes ahead with a proposed tax on US technology companies the United States will tax French wine “like they’ve never seen before.” European Council President Donald Tusk, who takes part in the G7 discussions, said the European Union would respond “in kind” if Trump carried out his threat.

While it is not on the agenda, there is also the continuing threat by the US to impose tariff on European auto exports, to be invoked on “national security” grounds, unless the European Union agrees to make concessions on US agricultural exports. This issue may soon come to the fore as the US moves to step up pressure on the EU after the announcement, on the eve of the meeting, of a partial trade deal with Japan which has also been subject to the same threat.

The conflicts are not only between the US and other members of the G7. British Prime Minister Boris Johnson is seeking to align the UK with the US as the conflict with the EU over the terms of Brexit intensifies. Johnson has threatened that Britain will not pay a significant portion of the £39 billion it is deemed to owe as a result of the separation.

There are also divisions with the European Union. These emerged as a result of Macron’s threat that France would refusse to sign a trade agreement between the EU and the Mercosur group of countries—Brazil, Argentina, Uruguay and Paraguay—over the alleged refusal of Brazilian President Jair Bolsonaro to take action against fires raging in the Amazon rainforest. Macron has accused Bolsonaro of lying on the issue.

But the French move brought opposition from Germany because its auto companies are expected to benefit from the agreement which has yet to be ratified by the parliaments of the EU. German Chancellor Angela Merkel said not concluding the trade deal was “not the appropriate answer to what is happening in Brazil right now.”

Surveying the state of international relations as the summit was about to get underway, Tusk said it would be a “difficult test of the unity and solidarity of the free world and its leaders.”

“The last years have shown that it is increasingly difficult for all of us to find common language when the world needs our cooperation more, not less. This may be the last moment to restore our political community,” he said.

All the evidence from the summit points to the fact that the “test” has been failed. While the lead role is being played by Trump, he is only the most maniacal personification of the international forces fuelling the eruption of conflicts of each against all and the formation of rival camps of great powers as took place in the 1930s.

In a two-and-a-half hour briefing of journalists last Wednesday Macron pointed to the deepening sense of crisis in which the summit has been held. “We are experiencing an absolutely historic period in our international order,” he said. There was a “profound crisis of representative democracy” and a “crisis of inequality, which is the crisis of contemporary capitalism.”

But the French president could offer no solutions. Rather, he focused on the need to assert the power of Europe and France. The global order was shifting and the world risked a “bipolarization between the United States and China” in which others faced “loss of sovereignty” and becoming “vassals” of one or the other. “I don’t want that for Europe or for France,” he said.

His remarks and the events of the summit itself point to how far and how fast global tensions and rivalries have gone down the road toward the eruption of another conflagration on a scale going even beyond that which erupted eighty years ago.