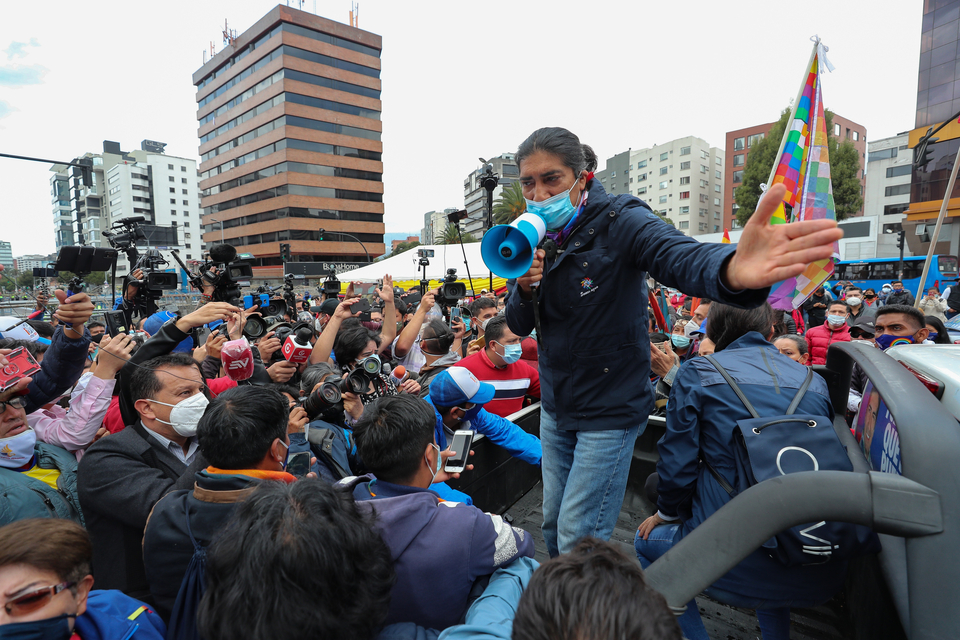 The Pachakutik candidate oscillates between accusing banker Lasso of fraud and inviting him to form a common front against Arauz, the correista presidential candidate who won Sunday’s elections.

Five days after the presidential and legislative elections in Ecuador, the National Electoral Council (CNE) has not yet finished counting 100% of the votes. However, with 99.88% of the ballots counted and 98.81% computed, it has been confirmed that Guillermo Lasso will enter the second round with 19.79% of the votes, while Yaku Perez, with 19.46%, is in third place.

Perez, in the context of the delay in the CNE’s official announcement, has denounced the existence of a fraud and initiated a series of legal actions. “Yesterday the fraud that had been prepared for some weeks before was consummated (…) perhaps we have a contemporary Nostradamus, former president Correa, who anticipated with almost precise figures how much Lasso will have, how much we will have and how much Mr. Arauz will have”, stated the Pachakutik candidate outside the CNE, in Quito.

According to Perez, there is an alliance between Correa, Lasso and Jaime Nebot, leader of the Social Christian Party (PSC) allied to CREO in Lasso’s candidacy. “Mr. Lasso, driven only by an ego that wants to go to the second round, knows that he is not going to beat Mr. Arauz, he is playing the game to Correismo, Correa astutely lures Lasso and Nebot into a trap”, he said before a group of followers who set up a vigil in front of the electoral power.

Thus, according to Perez, not only should he enter the second round, but he had won over Andres Arauz, since he was robbed of “ten points” in “a blatant fraud”. Perez had made the same statement on Monday, when he denounced the theft of the elections, something that, so far, has not been supported by evidence.

The Pachakutik party, in view of this situation, announced that it will ask the CNE for a “vote by vote” recount in the provinces of Pichinchas, Guayas, Manabí, Los Ríos, Esmeraldas, El Oro and Bolívar, “where a hand was played”, and will file a criminal complaint in Guayas for the crime of electoral fraud, will go to the Comptroller General of the Nation to request an audit, and will present the complaint before the Secretary of the Organization of American States, Luis Almagro, in the Inter-American Court of Human Rights and in the United Nations.

However, while Perez accused Lasso of complicity with Correa, he took up the proposal made on Wednesday by Xavier Hervas, of Izquierda Democratica (ID) -who came in fourth place with 15.74% of the votes- to form a front between the four political forces, Pachakutik, ID, CREO-PSC, to confront the Citizen Revolution. Thus, Perez affirmed that, once the recount is done, “whoever is the winner, we will dialogue and form a front against corruption”, thus against Correism.

Although it is still uncertain how the request for a recount before the CNE, other legal actions and, perhaps, a process of protests will evolve, as the days go by, the possibility of forming an alliance with a view to the ballottage has taken shape. The possibility is not only evident in statements, such as Perez’s tension between accusing Lasso of fraud and inviting him to form a common front, but also in the attempt to form an alliance between Pachakutik and CREO-PSC in the National Assembly in order to achieve the presidency of the legislature.

The development of the scenario has made evident the central objective shared by most of the political forces in Ecuador: to prevent the return of the Citizen Revolution to the government. This is also an objective shared by the U.S. government, involved behind the scenes, as evidenced by the visit of President Lenin Moreno to Washington days before the elections, where he held meetings with central officials of the administration and both parties in Latin America.

This confluence of national and international power factors around the electoral context would not be new, but the continuity of a series of actions undertaken during the last four years against Correismo from the government, the judiciary, electoral and media powers, which resulted in persecutions, imprisonments, disqualifications and exiles. Perez, who now denounces fraud, could, in a few days or weeks, be part of the anti-Correista electoral alliance with governmental influence. Will the social base that voted for him support Lasso? This is one of the several questions on the table.