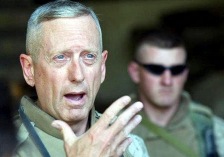 Lt. Gen. James Mattis, commanded Marine expeditions in Afghanistan and Iraq, spoke at the San Diego Convention Center during an exposition sponsored by the U.S. Naval Institute and the Armed Forces Communications and Electronics Association on Tuesday 2nd Feb. 2005.

Mattis until recently a career infantry officer, is quoted as saying in public and San Diego television station KNSD, which calls itself NBC 7/39, captured his comments on video

“Actually it’s quite fun to fight them, you know. It’s a hell of a hoot, It’s fun to shoot some people. I’ll be right up there with you. I like brawling.”

This prompted laughter from some military members in the audience.

“You go into Afghanistan, you got guys who slap women around for five years because they didn’t wear a veil. You know, guys like that ain’t got no manhood left anyway. So it’s a hell of a lot of fun to shoot them.”

Marine commandant, Gen. Michael Hagee, defended Mattis’s remarks, calling him “one of this country’s bravest and most experienced military leaders.” In a written Statement the general said, “Lt. Gen. Mattis often speaks with a great deal of candor.”

Marine Gen. Peter Pace who is a vice chairman of the Joint Chiefs of Staff speaking at a Pentagon press conference said, “all of us who are leaders have a responsibility in our words and our actions to provide the right example all the time for those who look to us for leadership.”

Torture: “I’d want to get back to you on that”

Senate Judiciary Committee confirmation of White House Counsel Alberto Gonzales as the next Attorney General of the United States.

Senator Durbin: “Can U.S. personnel legally engage in torture under any circumstances?”

Alberto Gonzales “I don’t believe so, but I’d want to get back to you on that.”

The Geneva Convention Against Torture prohibits torture at any time. That treaty, ratified by the United States and therefore part of the Supreme law of the land under the Supremacy Clause of the Constitution, says, “No exceptional circumstances whatsoever, whether a state of war or a threat of war, internal political instability, or any other public emergency, may be invoked as a justification for torture.”

The States Parties to this Convention

… Having regard to article 5 of the Universal Declaration of Human Rights and article 7 of the International Covenant on Civil and Political Rights, both of which provide that no one shall be subjected to torture or to cruel, inhuman or degrading treatment or punishment,

Have agreed as follows:

1. For the purposes of this Convention, the term “torture” means any act by which severe pain or suffering, whether physical or mental, is intentionally inflicted on a person for such purposes as obtaining from him or a third person information or a confession, punishing him for an act he or a third person has committed or is suspected of having committed, or intimidating or coercing him or a third person, or for any reason based on discrimination of any kind, when such pain or suffering is inflicted by or at the instigation of or with the consent or acquiescence of a public official or other person acting in an official capacity. It does not include pain or suffering arising only from, inherent in or incidental to lawful sanctions.

2. This article is without prejudice to any international instrument or national legislation which does or may contain provisions of wider application.

The Senate Judiciary Committee are still waiting for Mr Alberto Gonzalez US Attorney general to get back to them.