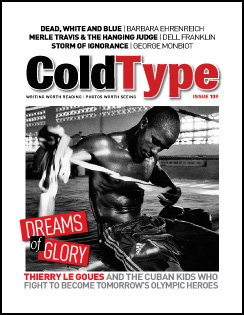 Our cover story is a brilliant, and very striking, photo essay by Thierry Le Goues on amateur boxing in Cuba. Other main features include two essays and a photo feature on the lies that dragged Britain into war in Syria, by David Edwards, Felicity Arbuthnot, and Garry Knight; a critique of the international media by Serbian writer Srdjan Stojanovic; and the story of a victim of the US attack on a hospital in Afghanistan.