In New York Times, Blue Eyes ‘Wince and Cloud’ at the Terror of a ‘Gentle Loner’

Colorado terror suspect Robert Dear, described in New York Times stories as a “gentle loner” and as “imperfect but a good man.”

Many were taken aback to read the New York Times‘ summary of what its team of reporters gleaned from interviewing neighbors of the man arrested for murdering three people at a Colorado Springs women’s health clinic:

END_OF_DOCUMENT_TOKEN_TO_BE_REPLACED 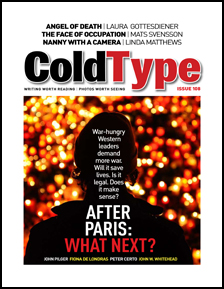 So, what do we do after the Paris attacks? Will bombing Syria save our lives? Or put us more at risk? Our essays by John Pilger, Fiona de Londras, Peter Certo, and John W. Whitehead delve into the issues involved.

END_OF_DOCUMENT_TOKEN_TO_BE_REPLACED

Candidates for US Presidency and Their Threats to Russia

The United States chortled with glee about Turkey’s shooting down of a Russian Su-24 on November 24 and the Pentagon called it «a sovereign act of self-defence». It wilfully ignored the fact that even if the Russian pilot had indeed mistakenly violated Turkish airspace there was not, by the wildest stretch of the imagination, the tiniest threat to Turkey…

END_OF_DOCUMENT_TOKEN_TO_BE_REPLACED

Impacts of Turkey’s Aggression against Russia. The “Turkish Stream” is Dead. Disruption of Gas Pipeline Routes to the EU. Russia’s Economy in Crisis? By Prof Michel Chossudovsky

“Regime change” in Ukraine engineered by the US State Department was largely responsible for the collapse of the “South Stream” gas pipeline project. Washington’s intent was to establish a de facto blockade which would prevent the flow of Russian gas to the European Union.

END_OF_DOCUMENT_TOKEN_TO_BE_REPLACED

The details of the case have not yet been publicly released but a source close to the case told GMWatch that Fellous had used or copied the signature of a scientist without his agreement to argue that Séralini and his co-researchers were wrong in their reassessment of Monsanto studies.

END_OF_DOCUMENT_TOKEN_TO_BE_REPLACED

The next two weekends will see three important events. Please do all you can to get to them and spread the word.

The government tells us there’s no money for our welfare state, education and public services but billions can always be found for war. The proposed vote in Parliament on bombing Syria by British forces is likely to take place within the next week. A vote to bomb is more likely following the terrible events in Paris. Yet this bombing will not stop terror attacks. The People’s Assembly is opposed to military response and is supporting the Stop the War Coalition day of action. Protests will take place this Saturday around the country.

END_OF_DOCUMENT_TOKEN_TO_BE_REPLACED

The downing of a Russian jet fighter over Syria’s airspace was undertaken  by Turkey in consultation with Washington and Brussels. Turkey did not take this decision without getting the greenlight from the Pentagon.

Is this an act of  revenge against Russia for bombing the US-sponsored Islamic State in Syria?

END_OF_DOCUMENT_TOKEN_TO_BE_REPLACED

See Contents list below and Access as a pdf file here: http://www.statewatch.org/news/2015/nov/eu-med-docs.pdf New key documents and decision-making by Council of the European Union, European Commission and Agencies plus Commentaries (in chronological order)

END_OF_DOCUMENT_TOKEN_TO_BE_REPLACED

Health Secretary Jeremy Hunt is trying to sneak through new NHS plans. [1] The Guardian newspaper has revealed that a key NHS blueprint has been slipped out. Even though the public have a right to comment, the government “has deliberately kept it quiet”. [2] Because of this cover-up, we’ve now got just over 24 hours to flood the Department of Health with messages demanding that our NHS is protected. [3]
END_OF_DOCUMENT_TOKEN_TO_BE_REPLACED

In response to the tragic Paris events of November 13, Central Intelligence Agency director  John Brennan  warned that “ISIL is planning additional attacks… It is clear to me that ISIL has an external agenda, that they are determined to carry out these types of attacks.” (Quoted in Daily Telegraph, November 16, 2015)

END_OF_DOCUMENT_TOKEN_TO_BE_REPLACED

With the November 13-14 Paris attacks, the world has passed a tipping point in what is sure to be a decades-long battle against Islamist terrorism. It is already abundantly clear that the November 13-14 terrorist atrocity could change the course of international politics.  Flush with cash, the Islamic State has proven its ability to recruit Europeans into its ranks and attack any country located thousands of miles from the Middle East…

END_OF_DOCUMENT_TOKEN_TO_BE_REPLACED

Take action to save Freedom of Information today

This evening at 11.45pm, the Commission on Freedom of Information closes its call for evidence.

This is not unusual in itself – the Government often goes through stages of evidence-gathering ahead of policy or law change.

However in this case, the Commission is both unnecessary and dangerously stacked.

END_OF_DOCUMENT_TOKEN_TO_BE_REPLACED

The government is trying to push through the plan that would allow private companies to access our personal medical data and increase privatisation of the NHS. But together, we could stop it. [1]
END_OF_DOCUMENT_TOKEN_TO_BE_REPLACED

This week, the billionaires that fund the Democratic Party and its satellite organizations will decide which of the “Black Lives Matter” groups will get paid to lead the Black “movement.” The #BlackLivesMatter network and Campaign Zero are eminently qualified for funding, having “already been accorded the status and privileges of constituent Democratic Party organizations.” Who else will make the corporate cut?

END_OF_DOCUMENT_TOKEN_TO_BE_REPLACED

FAIR (11/13/15, 11/16/15, 11/17/15) has noted the contrast between US media coverage of Paris and Beirut after the militant ISIS movement claimed responsibility for terror attacks in both cities. It may be even more illuminating to look at media reactions to another ISIS-claimed disaster, the bombing of Metrojet Flight 9268, a Russian tourist plane that went down over Egypt’s Sinai Peninsula on October 31, killing all 217 people on board. When the victims of terror come from an official enemy state, it’s clear that different media rules apply. END_OF_DOCUMENT_TOKEN_TO_BE_REPLACED

– The terrorist attacks carried out in the heart of the French capital, either coincidentally or intentionally, have served as the perfect point of leverage for the West on the very eve of the so-called “Vienna talks” regarding Syria.