For the fourth consecutive Saturday, “yellow vest” ( gilet jaunes ) protestors demonstrated yesterday across France against the rightwing government of Emmanuel Macron. They did so in defiance of ominous threats of state violence and a massive mobilization of security forces.

Clearly, the French President’s attempts to end the protests, first by postponing the gas tax hikes that set the movement into motion and then by canceling them outright, failed. The demands being raised—for social equality and against militarism and dictatorship—show that this is a movement directed towards the defense of workers’ interests, not just in France, but also internationally. 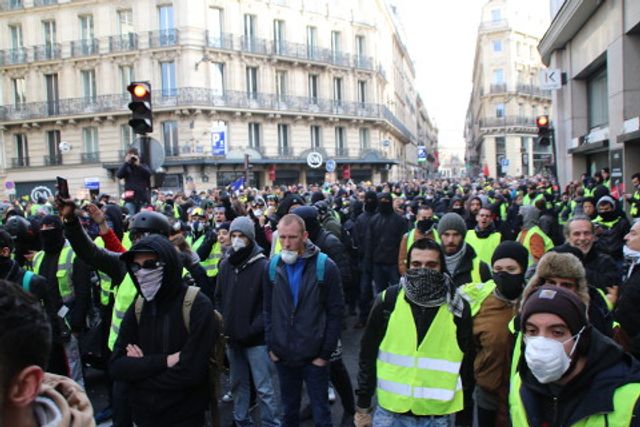 Yesterday’s protests paralyzed France and large sections of Belgium. The Minister of the Interior reported that 125,000 “yellow vests” protested in France. In the major cities where demonstrations were organized most shops were closed. On Saturday evening, the Vinci highway network reported “significant disruptions” and slowdowns on over 20 highways, many of them as the result of “yellow vest” protests and barricades.

Some 400 people were arrested in Brussels during a “yellow vests” rally of 1,000 protesters. This is the second “yellow vest” demonstration in the Belgian capital, directed against rising fuel prices and the increased cost of living. The protestors are demanding the resignation of Prime Minister Charles Michel. 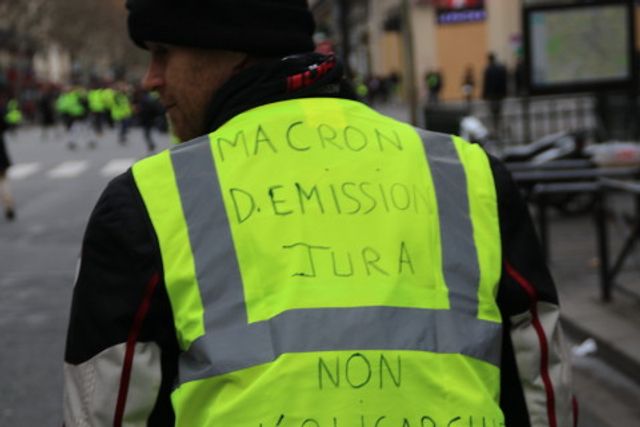 Unrest has also spread to the Belgian provinces. “We must take from the rich to give to the poor,” a “yellow vest” nurse told the press.

The French government hurled hysterical accusations against protesters descending on Paris, accusing them of preparing to “slaughter” ( massacre ) the “forces of order.” Police viciously attacked and repressed demonstrations in major cities, arresting almost triple the number of protesters as on the previous Saturday, December 1.

Throughout the country, police arrested 1,723 people, a level that French Minister of the Interior Christophe Castaner characterized as “exceptional.” Of these, 1,220 were ordered held in custody. Paris police headquarters announced that more than 1,082 people had been arrested, of whom more than 625 are being kept in custody. 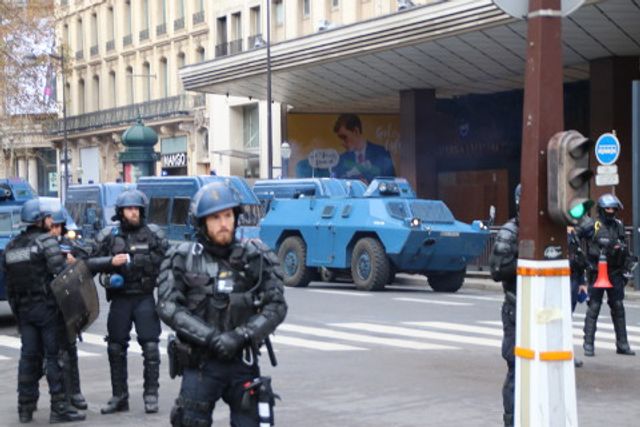 Clashes and confrontations between protesters and law enforcement broke out in the major French cities, including Paris, Bordeaux, Lyon and Toulouse. The police fired tear gas and flash balls to disperse the protesters, wounding over 100. In Paris and in Marseille’s Old Port, security forces attacked protestors with armored vehicles and water cannons.

In Paris, the police proceeded with extraordinary aggressiveness. To disperse the protesters early in the day, police mounted charges against peaceful demonstrators from the outset, before they could group together in a more powerful mass. Police attacked protesters on the Champs-Elysees and elsewhere in the city, surrounding and trapping peaceful protesters, and dispersing them with armored vehicles and mobile gendarmerie, including a mounted horse brigade.

WSWS reporters interviewed people in Paris. Sylvie, from the Oise region of northern France, said, “Every time that there has been anger, it’s because people can no longer provide for themselves. There is no right; there is no left. The unions have also taken us for a ride. We represent the people. We have the right to live decently, we have the right to be respected by those who are supposed to represent us.” 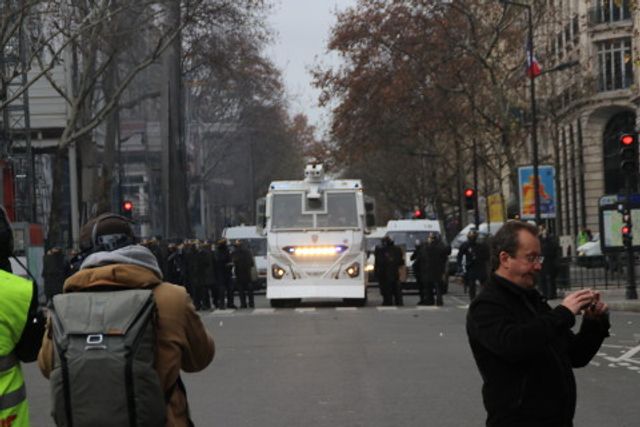 She added, “We are also denouncing the 1 percent who take advantage of the 99 percent; we want it to stop. In fact, it is they who tax us, they are the ones who hold the wealth. It’s modern slavery.”

Stéphane told us: “Macron very clearly showed where he was going, when he eliminated the tax on the wealthy and reduced my Housing Aid by €5. Is this democracy? No, we are now in a financial dictatorship. And I hope it will not become a military dictatorship. “ 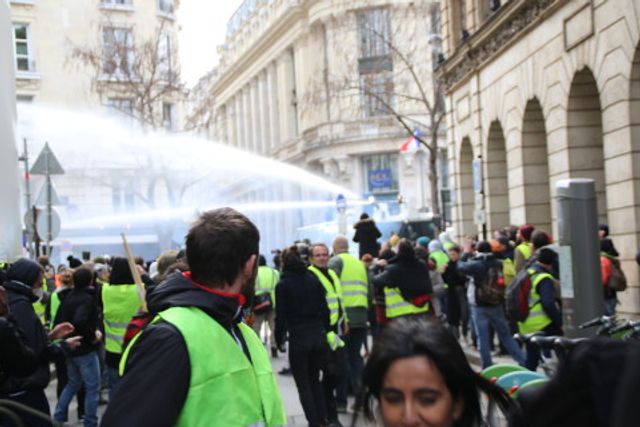 Shortly after being teargassed, the wife of a railway worker told the WSWS: “Mr. Macron treats us with contempt. They surround us, they send us to the right, then to the left, and they gas us.” She stressed that Macron no longer has any political legitimacy. “We cannot even demonstrate peacefully anymore; the police force charges us and fires tear gas at us. I hope the people will rise up. Excuse me, but is this a way to treat people, with tear gas?”

Once again, the government has indicated that it intends to trample on the demands of the “yellow vests” and continue the austerity policy that has been rejected by the vast majority of the French people. 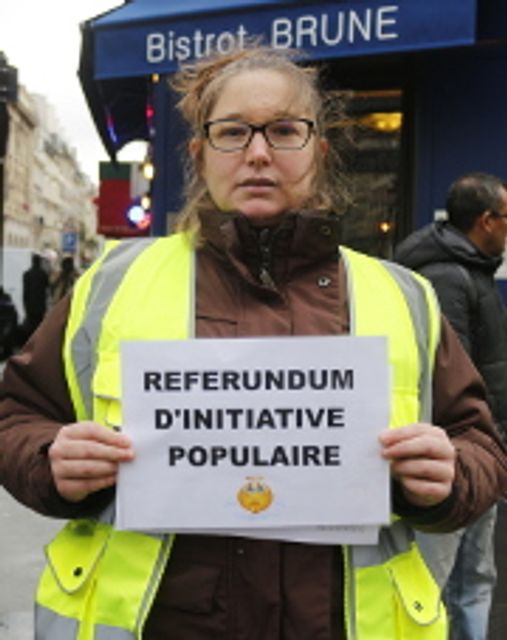 During a very short press conference on Saturday evening, Prime Minister Edouard Philippe stressed that there would be no change in government policy: “Vigilance and mobilization remain in place, because thugs are still at work in Paris and in some provincial towns (…) In order to confront this day, we had to conceive an exceptional plan, with the extensive mobilization of the forces of the law and means to ensure their continuous mobility.”

“It is necessary to reestablish our national unity, through dialogue, through work, through regroupment. The President of the Republic [Macron] will speak and propose (…) measures that will allow the French nation to find itself,” he added.

Rising anger among workers and young people in the face of official intransigence is developing into an open confrontation between the working class and the government, and towards a general strike. The main advantage the government enjoys at present is that, in this explosive situation, large masses of workers do not clearly see a revolutionary perspective. As they seek to fight against the government, they are confronted with Macron’s support from the petty-bourgeois parties that for decades have posed as the “left.”

Jean-Luc Mélenchon is calling for respect for the police. “Never deceive yourself as to your opponent. The handling of police forces is not the job of the police. It is the business of the politicians who give the orders. The duty of the police is to serve and obey. And the orders are political,” tweeted the leader of La France Insoumise (LFI). This defence of the security forces and French state is provoking ever greater mistrust of, and hostility toward, the LFI among the “yellow vests.” 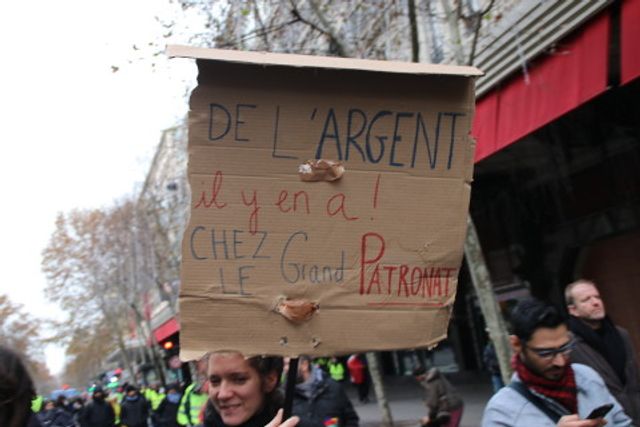 One sign reads: There is money! At the boss’s house

On Saturday “yellow vests” in Flixecourt in the northeast announced that, in the name of “political independence,” they would distance themselves from LFI MP Francois Ruffin, who had declared himself to be on their side. Ruffin had said he wanted to serve as a “bridge” between the movement and the government. But this proposal stumbled on the hostility of the “yellow vests” to the union apparatus and their political allies such as the LFI.

François Ruffin “gave us very honest support, but we do not want to be taken over by the media or politicians. We are fighting for full political independence, even though, of course, we all have a political color,” said Christophe Ledoux, one of the leaders of the movement in Flixecourt.

This development underscores the need to build action committees, independent of the trade union apparatuses, to enable workers in struggle to coordinate their actions, and a Marxist vanguard that will enable workers to identify and thwart attempts by official circles to smother and strangle their struggles.