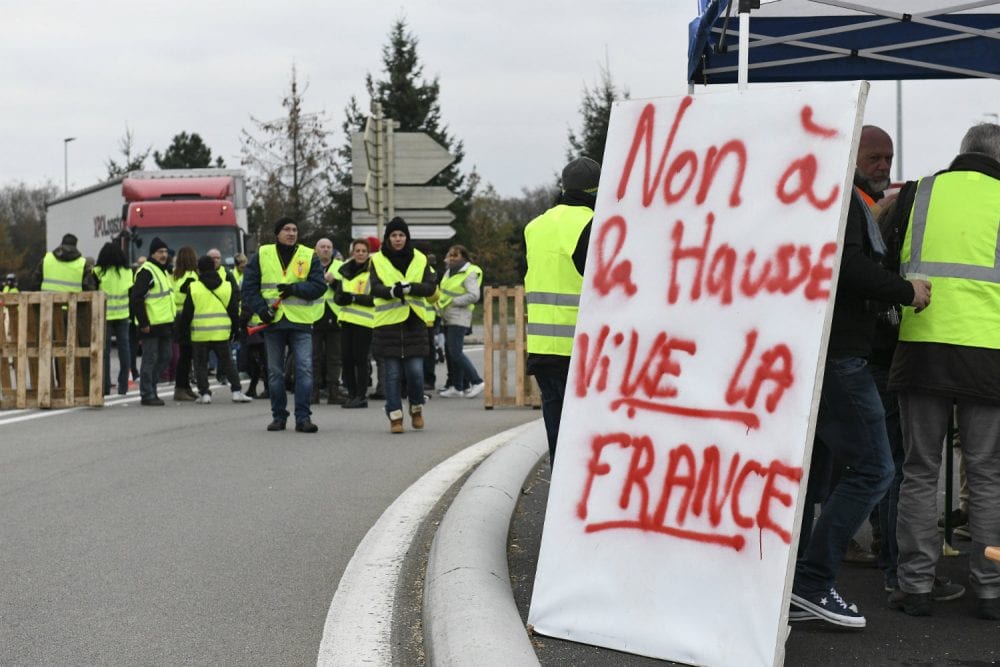 So it appears the privatization of France isn’t going quite as smoothly as planned. As I assume you are aware, for over a month now, the gilets jaunes (or “yellow vests”), a multiplicitous, leaderless, extremely pissed off, confederation of working class persons, have been conducting a series of lively protests in cities and towns throughout the country to express their displeasure with Emmanuel Macron and his efforts to transform their society into an American-style neo-feudal dystopia. Highways have been blocked, toll booths commandeered, luxury automobiles set on fire, and shopping on the Champs-Élysées disrupted. What began as a suburban tax revolt has morphed into a bona fide working class uprising.

It took a while for “the Golden Boy of Europe” to fully appreciate what was happening. In the tradition of his predecessor, Louis XVI, Macron initially responded to the gilets jaunes by inviting a delegation of Le Monde reporters to laud his renovation of the Elysée Palace, making the occasional condescending comment, and otherwise completely ignoring them. That was back in late November. Last Saturday, he locked down central Paris, mobilized a literal army of riot cops, “preventatively arrested” hundreds of citizens, including suspected “extremist students,” and sent in the armored military vehicles.

The English-language corporate media, after doing their best not to cover these protests (and, instead, to keep the American and British publics focused on imaginary Russians), have been forced to now begin the delicate process of delegitimizing the gilets jaunes without infuriating the entire population of France and inciting the British and American proletariats to go out and start setting cars on fire. They got off to a bit of an awkward start. 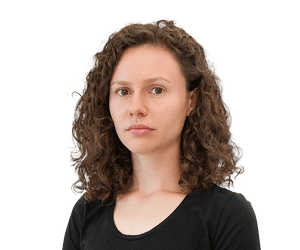 Angelique Chrisafis: Her bosses at Guardian HQ thought she was being too fair to the Gilets Jaunes.

For example, this piece by Angelique Chrisafis, The Guardian‘s Paris Bureau Chief, and her Twitter feed from the protests last Saturday. Somehow (probably a cock-up at headquarters), The Guardian honchos allowed Chrisafis to do some actual propaganda-free reporting (and some interviews with actual protesters) before they caught themselves and replaced her with Kim Willsher, who resumed The Guardian‘s usual neoliberal establishment-friendly narrative, which, in this case, entailed dividing the protesters into “real” gilets jaunes and “fake” gilet jaunes, and referring to the latter fictional group as “thuggish, extremist political agitators.”

By Sunday, the corporate media were insinuating that diabolical Russian Facebook bots had brainwashed the French into running amok, because who else could possibly be responsible? Certainly not the French people themselves! The French, as every American knows, are by nature a cowardly, cheese-eating people, who have never overthrown their rightful rulers, or publicly beheaded the aristocracy. No, the French were just sitting there, smoking like chimneys, and otherwise enjoying their debt-enslavement and the privatization of their social democracy, until they unsuspectingly logged onto Facebook and … BLAMMO, the Russian hackers got them!

Bloomberg is reporting that French authorities have opened a probe into Russian interference (in the middle of which report, for no apparent reason, a gigantic photo of Le Pen is featured, presumably just to give it that “Nazi” flavor). According to “analysis seen by The Times,” Russia-linked social media accounts have been “amplifying” the “chaos” and “violence” by tweeting photos of gilets jaunes who the French police have savagely beaten or gratuitiously shot with “less-than-lethal projectiles.” “Are nationalists infiltrating the yellow vests?” the BBC Newsnight producers are wondering. According to Buzzfeed’s Ryan Broderick, “a beast born almost entirely from Facebook” is slouching toward … well, I’m not quite sure, the UK or even, God help us, America! And then there’s Max Boot, who is convinced he is being personally persecuted by Russian agents like Katie Hopkins, James Woods, Glenn Greenwald, and other high-ranking members of a worldwide conspiracy Boot refers to as the “Illiberal International” (but which regular readers of my column will recognize as the “Putin-Nazis“).

A rebel checkpoint: “Macron resign… The Yellow Vests will triumph!”

And, see, this is the problem the corporate media (and other staunch defenders of global neoliberalism) are facing with these gilets jaunes protests. They can’t get away with simply claiming that what is happening is not a working class uprising, so they have been forced to resort to these blatant absurdities. They know they need to delegitimize the gilets jaunes as soon as possible — the movement is already starting to spread — but the “Putin-Nazi” narrative they’ve been using on Trump, Corbyn, and other “populists” is just not working.

No one believes the Russians are behind this, not even the hacks who are paid to pretend they do. And the “fascism” hysteria is also bombing. Attempts to portray the gilets jaunes as Le Pen-sponsored fascists blew up in their faces. Obviously, the far-Right are part of these protests, as they would be in any broad working class uprising, but there are far too many socialists and anarchists (and just regular pissed-off working class people) involved for the media to paint them all as “Nazis.”

Bernard Henri-Lévy: As usual, this decadent poseur, a notorious faux “philosophe”, is advising what is worst for the working class while pretending to be an “ami du peuple.” Long a favorite of anglo talk show hosts and “news programs”.

Which is not to say that the corporate media and prominent public intellectuals like Bernard-Henri Lévy will not continue to hammer away at the “fascism” hysteria, and demand that the “good” and “real” gilets jaunes suspend their protests against Macron until they have completely purged their movement of “fascists,” and “extremists,” and other dangerous elements, and have splintered it into a number of smaller, antagonistic ideological factions that can be more easily neutralized by the French authorities … because that’s what establishment intellectuals do.

We can expect to hear this line of reasoning, not just from establishment intellectuals like Lévy, but also from members of the Identity Politics Left, who are determined to prevent the working classes from rising up against global neoliberalism until they have cleansed their ranks of every last vestige of racism, sexism, homophobia, xenophobia, transphobia, and so on. These leftist gatekeepers have been struggling a bit to come up with a response to the gilets jaunes … a response that doesn’t make them sound like hypocrites. See, as leftists, they kind of need to express their support for a bona fide working class uprising. At the same time, they need to delegitimize it, because their primary adversaries are fascism, racism, sexism, homophobia, xenophobia, and assorted other isms and phobias, not the neoliberal ruling classes.

Nothing scares the Identity Politics Left quite like an actual working class uprising. Witnessing the furious unwashed masses operating out there on their own, with no decent human restraint whatsoever, Identity Politics Leftists feel a sudden overwhelming urge to analyze, categorize, organize, sanitize, and otherwise correct and control them. They can’t accept the fact that the actual, living, breathing working classes are messy, multiplicitous, inconsistent, and irreducible to any one ideology. Some of them are racists. Some are fascists. Others are communists, socialists, and anarchists. Many have no idea what they are, and don’t particularly care for any of these labels. This is what the actual working classes are … a big, contradictory collection of people who, in spite of all their differences, share one thing in common, that they are being screwed over by the ruling classes. I don’t know about you, but I consider myself one of them.

Where we go from here is anyone’s guess. According to The Guardian, as I am sitting here writing this, the whole of Europe is holding its breath in anticipation of the gilets jaunes’ response to Macron’s most recent attempt to appease them, this time with an extra hundred Euros a month, some minor tax concessions, and a Christmas bonus. Something tells me it’s not going to work, but even if it does, and the gilets jaunes uprising ends, this messy, Western “populist” insurgency against global neoliberalism has clearly entered a new phase. Count on the global capitalist ruling classes to intensify their ongoing War on Dissent and their demonization of anyone opposing them (or contradicting their official narrative) as an “extremist,” a “fascist,” a “Russian agent,” and so on. I’m certainly looking forward to that, personally.

Oh … yeah, and I almost forgot, if you were wondering what you could get me for Christmas, I did some checking, and there appears to be a wide selection of yellow safety vests online for just a couple Euros. 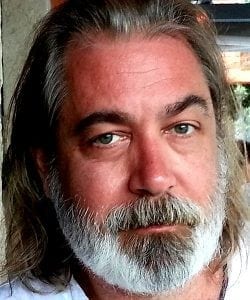 DISCLAIMER: The preceding essay is entirely the work of Consent Factory in-house satirist and self-appointed political pundit, CJ Hopkins, and does not reflect the views and opinions of the Consent Factory, Inc., its staff, or any of its agents, subsidiaries, or assigns. If, for whatever inexplicable reason, you appreciate Mr. Hopkins’ work and would like to support it, please go to his Patreon page (where you can contribute as little $1 per month), or send your contribution to his PayPal account, so that maybe he’ll stop coming around our offices trying to hit our staff up for money. Alternatively, you could purchase his satirical dystopian novel, Zone 23, which we understand is pretty gosh darn funny, or any of his subversive stage plays, which won some awards in Great Britain and Australia. If you do not appreciate Mr. Hopkins’ work and would like to write him an abusive email, please feel free to contact him directly.

This work is licensed under a Creative Commons Attribution-NonCommercial 4.0 International License