In a U.S. diplomatic cable, Bocaranda is dubbed a “reliable source” and to be “strictly protected.” 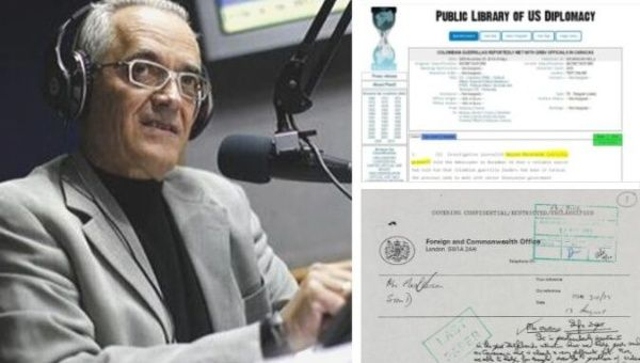 According to diplomatic cables from the U.S. and U.K., Nelson Bocaranda has been collaborating with foreign powers since the 1980s. (Reuters/Wikileaks)

Venezuelan Ambassador to the United Nations Samuel Moncada revealed evidence that well-known opposition ‘journalist’ Nelson Bocaranda has served as a “local agent” of the United States and United Kingdom governments since the 1980s in a series of tweets Sunday and Monday.

“In Venezuela, there are collaborators who lend themselves to surrender their homeland to traffickers of war and colonization. For years they have presented themselves as journalists and have enjoyed an unworthy reputation,” the Venezuelan diplomat and historian said.

According to Moncada,  in 1982 as the Malvinas Islands’ conflict raged between the UK and Argentina, the then UK Ambassador to Venezuela “needed a local agent who did not seem to defend the British” in order to confuse the Venezuelan public, which was pro-Argentina, with propaganda.

Their “ally” was Nelson Bocaranda, who had a primetime show on the private TV station RCTV. The ambassador then allegedly paid Bocaranda to broadcast a pro-British documentary. The agreement was done in secret as it was about disguising propaganda as “information.”

“The proof was so difficult to obtain, but we have it. They are official documents of the British government that were never written with the intention of being published,” Moncada said, sharing a document issued by the UK embassy in Caracas titled “Annual Information Report” and signed by VJ Henderson, First Secretary, and Information Officer, on July 13 and August 2, 1982.

The documents read, “We managed to persuade Nelson Bocaranda of Channel 2 to show the movie of the Information Commission about the history of the Falklands [Malvinas] dispute in his morning show. He did it with an Argentine in the studio to refute. Despite the refutation, Bocaranda received a great deal of criticism during and after the program for having broadcast ‘British propaganda’. He was clearly shocked at the end of the program.

When we spoke with him shortly after, he showed a strange mixture of euphoria for having aroused so much ‘controversy’ and concern about having been exposed too much. Nelson is an ally of ours, but we will have to take care of him for a good while. On this occasion, we spent almost all the capital we had deposited in him. To use it effectively again we will need to accumulate a little more capital.”

Yet this would not be the only time Bocaranda would be used by a foreign government to spy and act against his country.

On Monday, Venezuela’s representative to the U.N. took to Twitter again to argue that Bocaranda also served the US government.

“In 2009, the U.S. ambassador to Venezuela wrote a confidential cable to Washington, stating that Bocaranda was secretly passing on the operational capacity of the Venezuelan Air Force,” Moncada affirmed. 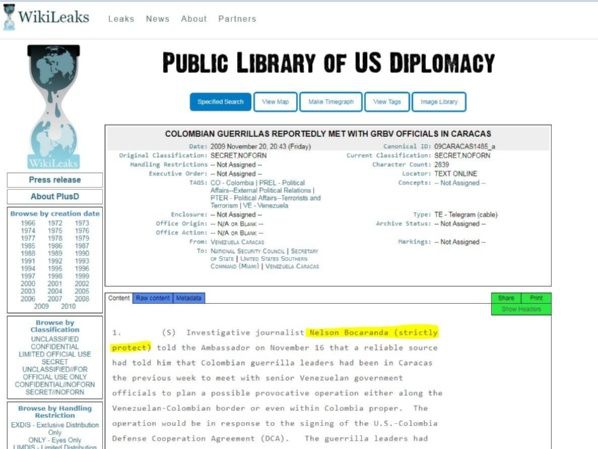 The leaked diplomatic cable published in WikiLeaks, dated November 20, 2009, and signed by former US Ambassador to Venezuela Patrick Duddy, reports that Bocaranda informed the foreign representative on November 16 that Venezuela only had eight pilots for its 20 F-16s.

The cable, in which Bocaranda is dubbed a “reliable source” and to be “strictly protected,” goes on to say that the journalist informed of an alleged visit to Caracas by Colombian guerrillas in what he “believed” was a plan to set up a provocation either along the Venezuelan-Colombian border or even within Colombian territory.

“This misinformation has nothing to do with the professional ethics of a journalist. It is a clear act of spreading toxic information to provide excuses for the U.S. and Colombia to attack Venezuela,” Moncada commented.

The diplomat reminded that Bocaranda violated Venezuelan laws and cited article 128 of the Venezuelan criminal code, as it states that “anyone who conspires with a foreign country, foreign enemies, terrorist groups or associations, paramilitaries, insurgents or subversives; against the integrity the territory or against its republican institutions, or harass them by any means for any of these purposes, will be punished with the imprisonment penalty of twenty to thirty years.”