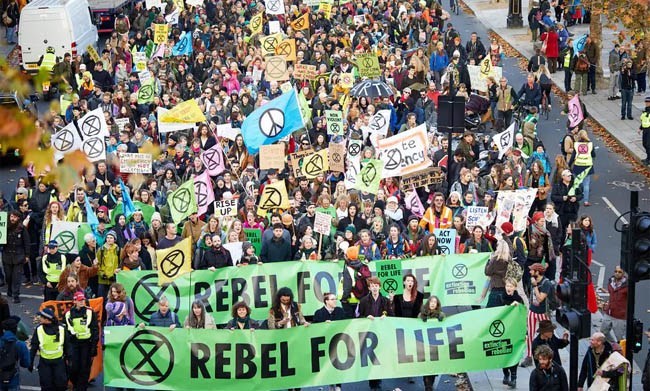 The rise of ‘Extinction Rebellion’ signals that climate activism is moving up a gear. Further radicalisation is probably inevitable.

Extinction Rebellion (or XR) is climate activism’s new face. One of its new faces at least, together with the youth climate strikers.

The XR movement was created in 2018 in the UK with the stated aim of using civil disobedience and nonviolent resistance to protest against man-made climate change, biodiversity loss, and the risk of social and ecological collapse. It has received the support of numerous academics, and has organised numerous protests, blockades and occupations in recent months, in London and other British cities. It has attracted significant media attention and has probably already made an impact, including in pressuring various local authorities and even the British parliament to declare a “climate emergency”. It has started to expand beyond the shores of the UK, but nevertheless remains a very British phenomenon so far, which has already earned a place in London’s famous Victoria & Albert Museum…

Extinction Rebellion is founded on the “scientifically established” fact that we humans are not only destroying the natural environment but are also, on our current trajectory, headed for extinction in the not too distant future. It aims to force humanity to take drastic action and change course while its still can, meaning immediately. To this end, civil disobedience is seen as justified and necessary.

A few days ago one of Extinction Rebellion’s founders, Roger Hallam, was invited to the HARDtalk programme on the BBC.

During the conversation Hallam announced that new and massive disturbances would take place in the streets of London in the next few months. He also made a series of claims about what “science” allegedly says the future will be like if drastic action is not taken now. The (climate) science, he asserted, says that we’re heading for catastrophe if there is no fundamental change in the structure of the global economy in the next ten years, and that climate breakdown will destabilise societies and trigger social collapse, creating mass starvation around the world. This mass starvation, he said, will start in the next 10 years. Over the next decades, up to six billion people could die from starvation or be slaughtered, meaning that there could be only a billion people left on the planet at the end of the century. All this is really what the science says, he insisted.

Whatever one may otherwise think of Extinction Rebellion, the claims made by Roger Hallam are not, as he contends, based on climate science. They are based on extrapolations and interpretations that do not form part, as such, of the ‘climate science consensus’. The models used by climate scientists and the reports and scenarios of the Intergovernmental Panel on Climate Change (IPCC) do not make it possible to assert with any degree of certainty that mass starvation will start in the next decade or that six billion people will die from starvation or slaughter during this century.

Hence, Roger Hallam’s claims have triggered some pushback in the climate science community. These exaggerated claims, in fact, make Hallam an easy target for climate change deniers, who can portray him as either a nutcase who is just peddling fiction to foster “global warming hysteria”, and/or as an unscrupulous political activist who (mis)uses climate science to serve his political aim of overthrowing the current economic, social and political order. Either way, his claims about what “science” allegedly says do not necessarily serve the cause of climate action.

At the same time, using alarmism as a political tool is understandable, maybe even justifiable. Climate activism, it has to be said, has so far been a resounding failure, in the sense that despite all the awareness it has generated it hasn’t changed almost anything to the world’s trajectory of ever-increasing emissions of greenhouse gases (GHG). In order to finally mobilise people on a wider scale and convince them that drastic action must be taken urgently, the climate movement probably needs to step up a gear. Making shocking claims about impending catastrophe can be one way of doing so. When people start getting scared, it can be hoped, they will maybe start moving…

This “be afraid, be very afraid” approach has already been tried of course, in particular by American scientist Guy McPherson, who has for several years now been warning about “near-term” (i.e. by 2030) human extinction. This claim has gained him few friends in the scientific community, and it has also failed to attract mass following – but that’s probably because he offers no hope of salvation whatsoever: we’ll just all be dead in about ten years time and that’s it… Extinction Rebellion, on the other hand, seems to be more successful at attracting people and having an impact on the public conversation, probably because the movement’s claims are catastrophist rather than apocalyptic, as it asserts that we can still change course and avert extinction if we really want to. In his interview to the BBC, Roger Hallam declared, for instance, that “we can do whatever we like in our societies if we’re prepared to undertake the costs” or that the UK could be at net-zero carbon emissions by 2025. These claims are no more supported by science than those about the starvation and slaughter of six billion people in the next decades, but at least they make it possible to spur people into some sort of action.

The relative success of Extinction Rebellion so far probably also owes to other factors, including:

The science of overshoot

Of course, those who really do pay attention to the unfolding environmental and societal crises know that climate change, despite being now the main focus of activists and of popular attention, is only a symptom of a wider ‘predicament’ that may be called ‘human overshoot’, i.e. the crossing by humanity of multiple ‘planetary boundaries’, which destabilises the Earth system and puts at risk the planet’s hospitality to living things. This predicament cannot be understood through climate science alone, and requires a much broader understanding of a myriad of complex systems and of their interactions. Based on this broader understanding, the claims made by Roger Hallam do not seem so implausible anymore. The outcomes he predicts if we don’t change course are by no means certain, but they are certainly within the range of possibilities, regardless of whether humanity’s energy and material throughput continues to rise as foreseen in most climate models and scenarios or becomes constrained earlier than expected as a result of fossil fuel depletion. The probability of their occurrence, in fact, tends to be rising over time rather than decreasing.

Unfortunately, all this cannot be fully and unequivocally “demonstrated” scientifically. Human overshoot and the very real risk of social and environmental ‘collapse’ that it entails can be discussed and documented at length, but any attempt at modelling the world’s complex systems and their interactions can only be inherently partial and incomplete, and the consequences and outcomes of human overshoot cannot be investigated and tested empirically at any meaningful or reliable scale. To some extent, there is therefore inevitably an element of “belief” in the minds of people who think they have grasped the human predicament, and in the predictions they make, publicly or not, about the future.

Overall, it therefore looks like Extinction Rebellion may be playing a useful role in trying to focus more and more people’s attention on the risks of our current trajectory and the need to change course drastically and immediately. The movement and its leaders should however probably be careful when claiming that this or that is going to happen by such or such date because “the science says so” – and that’s also probably true for Greta Thunberg, who seems to have a similar tendency. Science is never so unequivocal as to support detailed and time-bound predictions about the fate of the world. It’s probably always preferable for environmentalists to avoid falling into what could be called the ‘Paul Ehrlich trap’… (with all due respect to American biologist Paul Ehrlich, the alarmist predictions he made in the 1960s and 1970s did more harm than good to the cause of earth sciences, in particular by disqualifying for several decades any serious policy conversation about overpopulation).

Extinction Rebellion, and climate activists in general, should also be mindful that trying to scare people into action also conveys the significant and inherent risk that scared people may move in the wrong direction, i.e. towards survivalism rather than resilience, selfishness and exclusion rather than solidarity, frantic resource-grabbing rather than conservation, violence rather than cooperation, etc. The prospect of ecological and societal collapse is apparently already being hijacked by ‘eco-fascist’ murderers, and it looks like parts of the political right in the West may be in the process of flipping from denialism to the instrumentalisation of climate change for their political aims.

As liberal democracy keeps degenerating and becoming dysfunctional and unable to meaningfully address the various aspects of the human predicament, it is therefore possible that more and more people may get lured, in Western countries, towards some form of right-wing radical environmentalism, which would somehow acknowledge human overshoot but vow to reduce it by scrapping excess people from the surface of the Earth – or at least preventing them from achieving or maintaining Western levels of energy and material throughput. Faced with this prospect, the radicalisation of left-wing climate and environmental activism is probably inevitable, and Extinction Rebellion is only a step in that direction. The “rebellion” might, at some point, realise that civil disobedience and peaceful protests are insufficient to trigger the drastic and rapid change that it seeks, and turn to more radical means of action. It may even morph into some form of ‘eco-communist’ movement, willing to constrain people everywhere into ‘sustainable’ levels of energy and material throughput through prohibition and coercion.

Eco-communism, it has to be reminded, has somehow already been “successfully” tried somewhere… in Cuba. As shown by his speech to the Earth Summit in Rio in 1992, Fidel Castro was quite aware of humanity’s ecocidal trajectory and of the forces leading to its possible extinction, and it is therefore probably no coincidence if Cuba has often been presented as “the most sustainable country in the world” in recent years. However, the example of Cuba also shows that people can probably only be constrained into ‘sustainable’ levels of energy and material throughput through authoritarian means, in a closed and repressed society. As the island opens up to foreign trade, investment and influence, its high level of sustainability is actually sure to deteriorate.

This, in fact, is the dilemma that the climate movement is probably going to have to face in the coming years: bringing humanity down to ‘sustainable’ levels of energy and material throughput in just a few decades, and maintaining it there, is most likely incompatible with democracy, freedom and openness. It probably won’t take long before the rebellion has to come to terms with this inconvenient truth.