When a country’s main union for journalists polices the Overton window, you are in a society well on the way to authoritarianism. For four months I have been excluded from the National Union of Journalists and, despite repeated requests, the NUJ even refuses to tell me the nature of the objection.

140 days ago, on 5 March 2020, I applied online to renew my lapsed membership of the National Union of Journalists. For two months I heard nothing, then after inquiring I was told objections had been received to my membership. After two months more pressing I was told the objection is that I am not a “fit and proper person” to join the trade union. I still have no idea on what grounds this is alleged, or who alleges it.

A strange process is underway by which an investigation is carried out, and concluded, by the Assistant Secretary General and a report submitted to the National Executive. Only after the report is finalised do I get any opportunity to see what is alleged against me or to comment, which seems a quite remarkable proceeding.

The other thing that seems very wrong in this procedure is how objections were received and to whom my application was advertised. The system is supposed to work this way. The application is received by HQ, and is then sent within 14 days to your local branch for comment. That is the point at which objections can usually be lodged. My application has never been sent to my local branch, or anywhere. It has never left NUJ HQ. The local branch did not know the application existed until I asked a friend there to check on its progress, over two months after it was lodged.

In my case, my application has never even been sent to my local branch, where I was a member without incident for three years. Objections were lodged while my application was still at NUJ HQ.

But how can this happen? The NUJ claim that the delay in dealing with the objections (plural) is caused by the need to locate the objectors and verify their standing in the union. So if these objectors are so diverse and unknown to NUJ HQ, how did they find out about my membership application in order to object to it? The application was never sent out for comment or posted anywhere. The most obvious explanation is that somebody within the NUJ staff has tipped off some group to object.

I should explain the reason my membership had lapsed. I was a temporary freelance member for three years, which is open to those who get less than 50% of their income from journalism. If after three years you have not reached the 50% bar, you cannot continue as a member. I found myself unfortunately in that position.

As my other income has now mostly gone and there are now subscriptions to this blog, I applied to rejoin as soon as I met the income qualifying bar, after about a 3 year gap. It is worth noting I did not apply as a result of being charged with contempt of court – I applied some eight weeks before that happened. I am not seeking financial assistance from the union.

It is not the income question which is blocking my membership but the allegation I am not a “fit and proper person”. As I lead a pretty blameless personal life, this can only relate to my writings. I find this extremely sinister. It is certainly true that I write things that NUJ members within the mainstream media do not. It is certainly true that I attract massive criticism on social media from a section of mainstream journalists for my writings – on the Skripal case, for example.

But a National Union of Journalists which excludes writers for their opinions is a contradiction. I do not claim this as an absolute – out and out racists and fascists are a different thing. But the union is supposed to be a union for journalists, not for stenographers to power. I find the flat refusal of the NUJ to tell me what I am alleged to have done wrong to be particularly chilling. I find the entire process of handling my application, and the question of how these objections arose before the application was sent out for comment, deeply suspicious.

I therefore call on all members of the NUJ to raise this issue, either direct with NUJ HQ or preferably through your branch. It should not need saying, but strangely it does, that journalists whose political opinions are very different to my own ought still to support my right to be a member of the union. It exists to defend journalists, not to exclude them. If readers have contact with a probable NUJ member, I should be grateful if you could draw this matter to their attention and ask them to act.

I am very sorry to be obliged to publish this post. I am trying to rejoin the NUJ, not to pick a fight with it. My previous three year membership was entirely uneventful. I am a strong supporter of unions, that is why I am trying to rejoin one. But what is happening appears to be extraordinary and wrong. Who are these anonymous objectors and to what do they object? How did they find out I had applied before the application was sent out for comment? Who is behind this objection?

Below is my correspondence with the NUJ. Note that I applied for membership online on 5 March and the first email was received on 26 May, eleven weeks later, in reply to phone calls I made to ask what was happening. 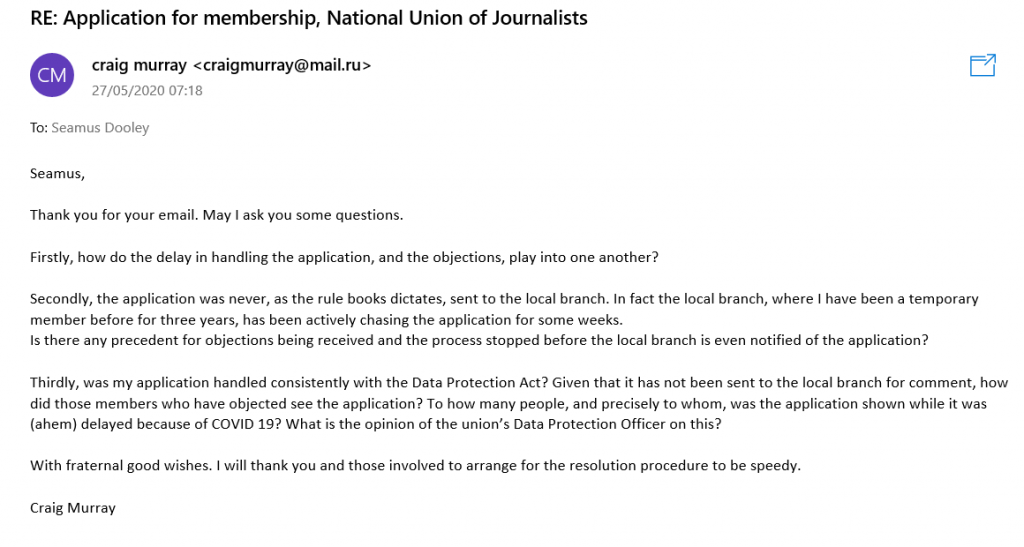 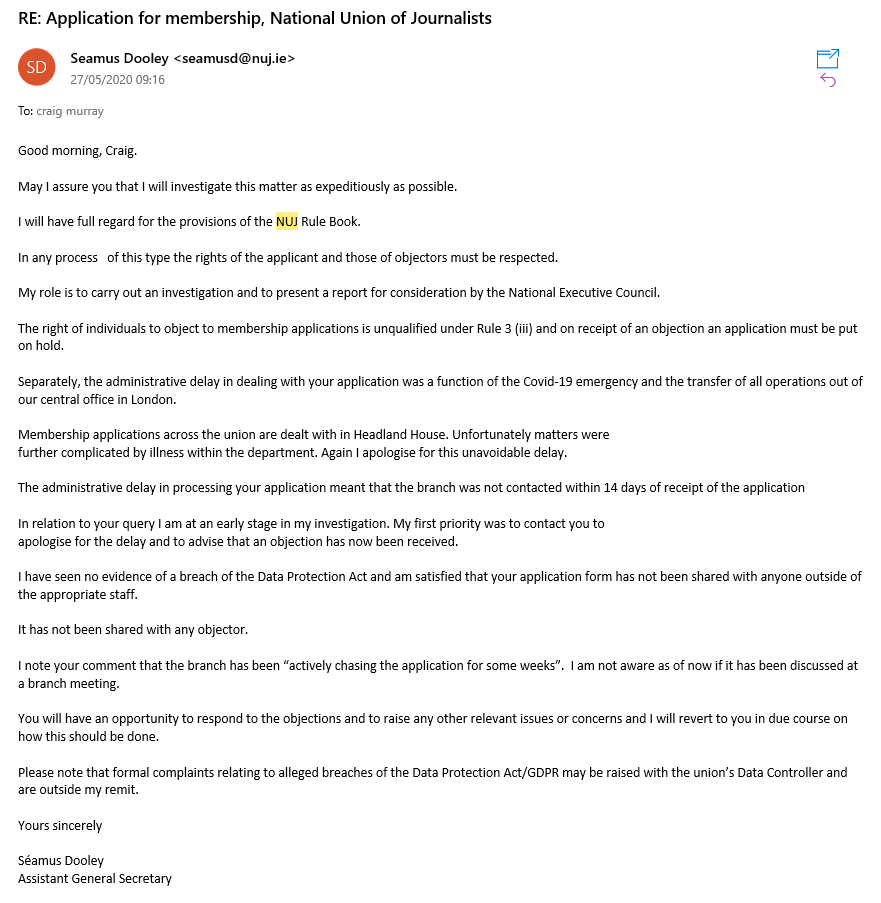 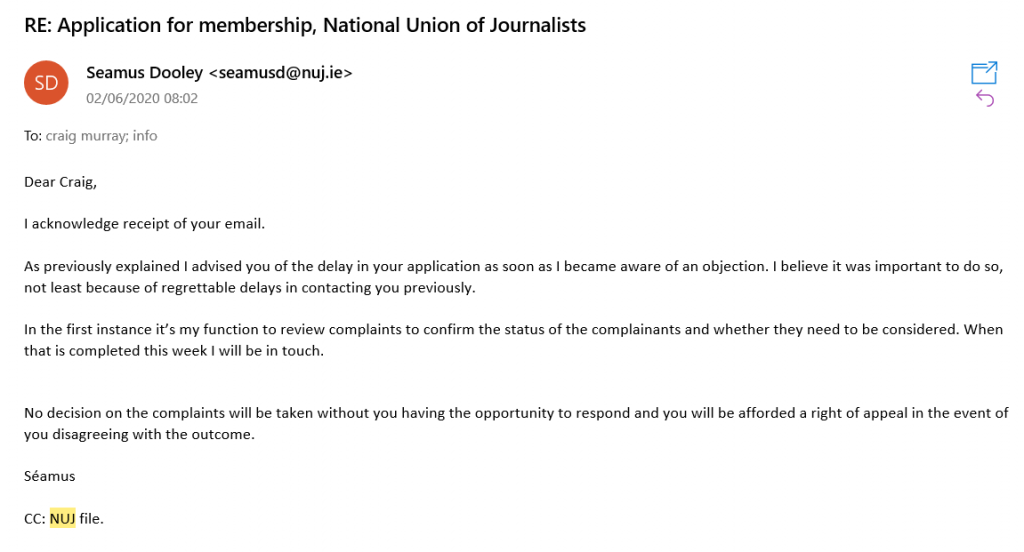 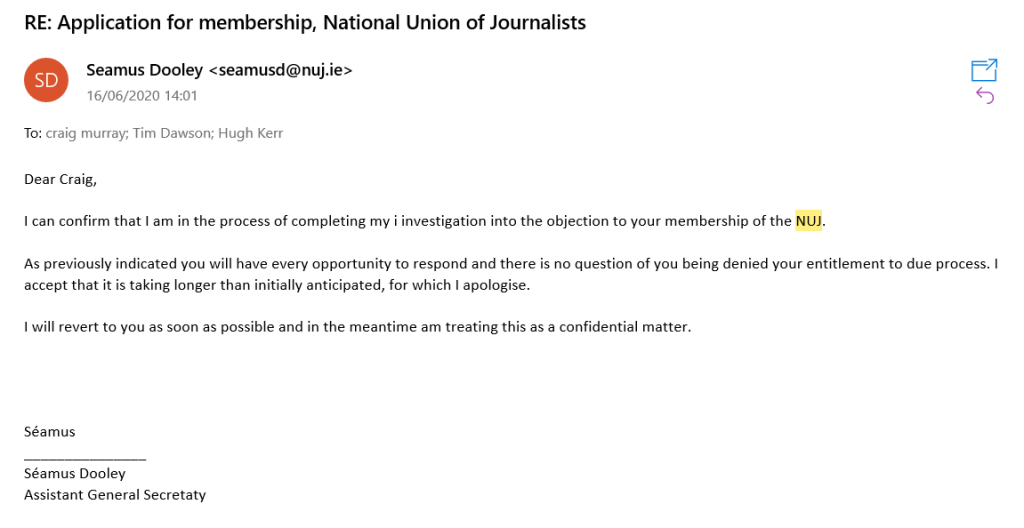 Tomorrow will be precisely one month since I last heard from the NUJ. They still will not tell me what the objection is, 140 days since I submitted my application to rejoin.

One thought on “Calling all NUJ Members”