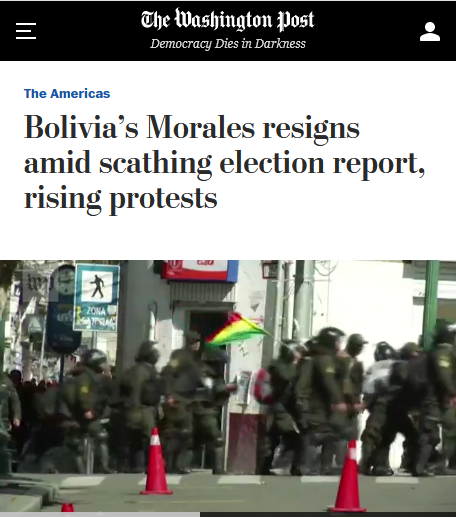 Reports like the Washington Post‘s (11/10/19) failed to convey the reality that Bolivian President Evo Morales was forced out by the military.

In the Bolivian elections last October 20, incumbent President Evo Morales of the Movement Toward Socialism party (MAS in Spanish) won a 10-point victory over his nearest challenger, as pre-election polls predicted. The next day,  the Organization of American States issued a statement challenging the legitimacy of the elections, asserting a “hard-to-explain change in the trend of the preliminary results.” Immediately, right wingers violently took to the streets to protest the president. The OAS issued a followup statement confirming their analysis on November 10. The same day, the military forced Morales to step down.

Senator Jeanine Añez declared herself president with the support of high-ranking members of the Bolivian military, as well as the US State Department—despite the fact that her conservative party earned a mere 4% of the vote during the elections.

This military coup was immediately decried by observers who have seen this familiar pattern of toppling governments. Mark Weisbrot, director of the Center for Economic & Policy Research, debunked the OAS statement, noting that it provided “absolutely no evidence — no statistics, numbers, or facts of any kind,” to support its conclusions. The CEPR objections were largely ignored by corporate media (FAIR.org, 11/18/19).

When a country’s military forces the ouster of a sitting president, that is a military coup. Referring to it simply as a “resignation”—as in the Washington Post’s “Bolivia’s Morales Resigns Amid Scathing Election Report, Rising Protests” (11/10/19)—fails to capture the nature of the overthrow. Describing Morales’ ouster as merely happening “amid widespread unrest” is a way of telling readers: “This sort of thing happens all the time in this part of the world. No need to look into it.”

US media ignored dissenters from the OAS throughout this period, and endorsed the coup, as FAIR (3/5/20) has previously reported. Even when dissenting views were brought up, there was little discussion of the implication: that the US had supported yet another unlawful coup. 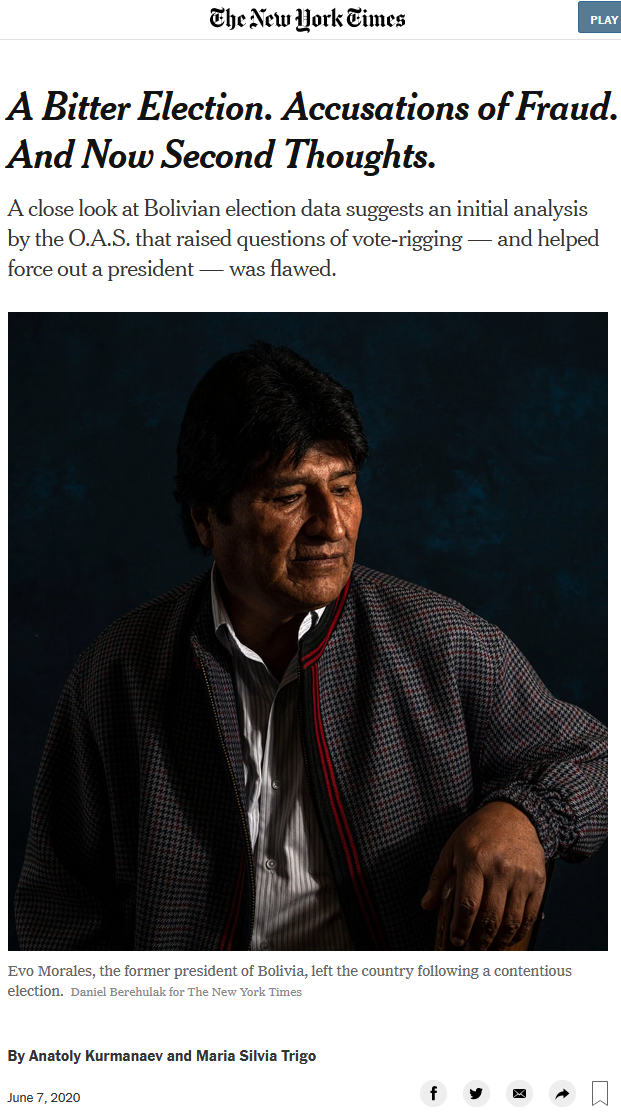 Both the New York Times (6/7/20) and Washington Post (2/27/20) have now run articles casting doubt on the OAS’s accusations of vote fraud.

Four months after the coup was a done deal, with Morales and others forced from the country, the Washington Post published a research piece (2/27/20) that found that “the OAS’s statistical analysis and conclusions would appear deeply flawed.” The piece opened by explicitly describing the November 10 ouster of Morales as a “military-backed coup.” There was still no mention of the US role.

Añez came into power as an “interim” president, with a mandate to hold elections as soon as possible. The government instead delayed elections in March, then again in May, both times citing concerns about coronavirus. Notably, polls show that the MAS candidate, Luis Arce, has been leading in the polls for some time and would win fair elections.

Even the New York Times (3/30/20)  acknowledged that this delay was a way of consolidating power, publishing a piece headlined, “For Autocrats, and Others, Coronavirus Is a Chance to Grab Even More Power” that included the (first) delay of Bolivia’s “much anticipated” elections. It’s unclear whether Añez is meant to be considered an “autocrat” or one of the “others”; the piece only mentions that “a disputed election last year set off violent protests and forced President Evo Morales to resign.”

The New York Times (6/7/20) has since reported its own analysis of the Bolivian election results, concluding that “the Organization of American States’ statistical analysis was itself flawed.” The irregularities the OAS found were “an artifact of the analysts’ error,” the academic paper cited by the Times found.

FAIR (7/8/20) has previously reported on the Times’ belated admission. Glenn Greenwald,  writing for the Intercept (7/8/20), put a fine point on the subject in a piece headlined “The New York Times Admits Key Falsehoods That Drove Last Year’s Coup in Bolivia: Falsehoods Peddled by the US, Its Media and the Times.”

Yet after both of the nation’s leading papers admitted that the reason for declaring the October election a fraud was itself a fraud, few have asked the critical questions about why the OAS and the United States were so quick to have Morales removed from office. In fact, few media outlets altered their coverage of Bolivia at all.

Reuters (7/9/20) described how “a disputed election led to widespread protests that eventually toppled…Evo Morales,” with a later piece (7/15/20) reporting that Añez “took power in a political vacuum.” A CNN segment (7/17/20) on the COVID crisis in Bolivia described how “widespread unrest last year led to the resignation of longtime leader Evo Morales.” None of these gave any hint that the complaints about the election had been debunked, and that the shift in power amounted to a coup.

Last week, the Bolivian government announced that elections would be delayed for a third time. Critics again claim that the crisis is being used to further consolidate power. Former President Morales, who is currently living in exile in Argentina, said that “the de facto government wants to gain more time to continue the persecution of social leaders and against MAS candidates. It’s yet another form of persecution.” One of the coup leaders, far-right leader Fernando Comacho, is calling for elections to be canceled altogether. 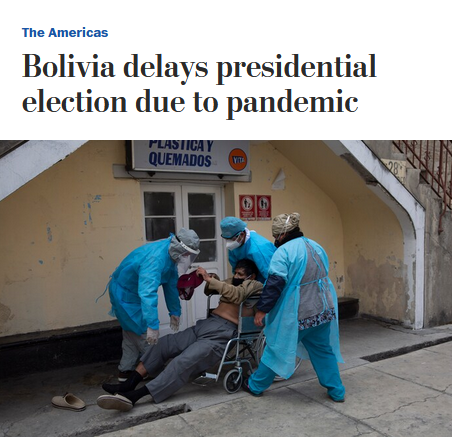 In Western reporting on the latest election delay, outlets consistently failed to place it in the context of the coup. It is as if the Times and Post’s admissions never happened.

A Reuters piece  (7/23/20)  headlined “Bolivia Election Delayed to October as Pandemic Bites, Opposition Cries Foul,” described how the current government came to power: “A fraught election last year sparked widespread protests and led to the resignation of the country’s long-term leftist leader.” They kept to the official narrative of a “fraught election,” rather than the reality of a right-wing usurpation, given cover by false OAS proclamations. There was no indication that the delay could be a form of power consolidation.

The Associated Press (republished by Washington Post, 7/23/20) not only ignored the context of the coup, it also whitewashed the opposition’s criticism of the delay. Morales was cited as objecting to the delay on procedural grounds, and worrying about the “country’s crisis of legitimacy.” No direct quotes from the former president were used.

US media have a well-documented history of supporting right-wing coups and regimes around the world, and not much seems to be changing. It is abundantly clear that Morales was unlawfully overthrown by his country’s military on false pretexts. The United States supported and continues to support this coup. That media narratives remain unchanged even after the release and acknowledgment of new evidence indicates that it is official dogma, and not reality, that sets the tone of journalistic coverage.