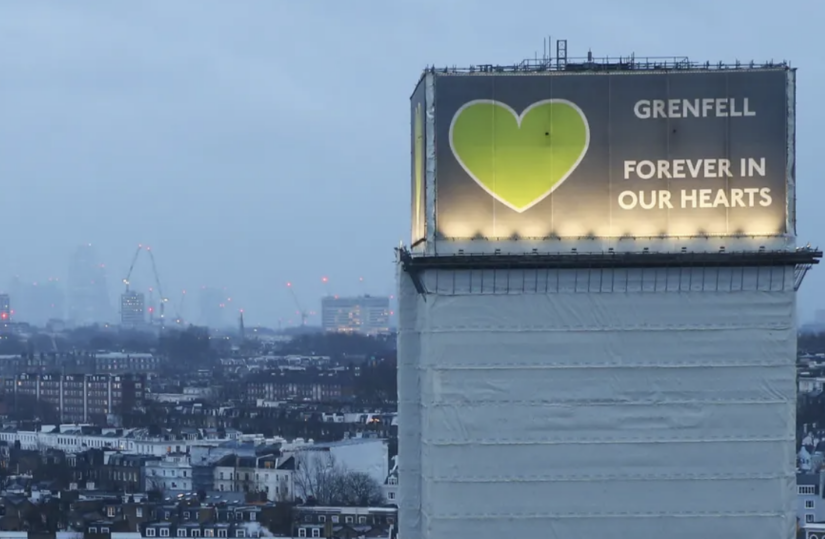 By Peter Geoghegan and Jaysim Hanspal – The British government has been accused of trying to cover up a “national scandal” by telling local councils it was “appropriate” to block the release of information about high-rise buildings like Grenfell Tower that have potentially lethal aluminium cladding.

Aluminium composite cladding (ACM), which was implicated in the catastrophic Grenfell Tower fire that killed 72 people in June 2017, was banned the following year.

But the Ministry for Housing, Communities and Local Government (MHCLG) has told local authorities they can block Freedom of Information (FOI) requests that may identify high-rise buildings with aluminium cladding.

In a letter sent to all local authority chief executives, and obtained by openDemocracy, the housing ministry told councils that when responding to FOI requests about ACM “it is appropriate to withhold information that could lead to the identification of affected buildings”.

The news comes as Labour leader Keir Starmer announced that he will force a vote in Parliament next week to commit the government to publishing figures on the number of buildings affected by dangerous cladding.

The housing ministry’s letter, written by the director-general of building safety in November 2017, states that “clearly it is not for” the department to determine how councils respond to FOI requests. But Jon Baines, an information rights expert at the law firm Mishcon de Reya, said he “cannot see any other way of interpreting” the letter than as official guidance.

openDemocracy has learned that local authorities are still relying on the departmental guidance on disclosing information about high-rises with ACM, more than three and a half years after the Grenfell fire.

Separately, flat owners living in properties with flammable cladding have been told not to talk to the media without government approval. In some high rise blocks, residents have had to pay for professional night-time patrols to check that their building had not caught fire.

“This is a national scandal that needs to be exposed,” veteran Grenfell campaigner Moyra Samuels said, accusing the government of attempting a cover-up of the scale of the cladding problem.

“Can you imagine having to stay in your yard all day in a place with ACM, what further impact that would have on your mental health?” she added.

The housing ministry’s ACM letter also raises more questions about the centralisation of FOI in Whitehall.

In November, openDemocracy revealed that the Cabinet Office runs a secretive Clearing House unit that coordinates FOI responses and vets requests from journalists and others who submit FOI requests. Experts say this is against the spirit and the letter of FOI law.

‘A block on scrutiny’

Earlier this year, following an FOI request, Hounslow council in west London said that it could not release information that would identify buildings with potentially hazardous cladding “in accordance” with the housing department’s letter. Other London boroughs have refused to release similar information.

Cladding campaigners said the ministry’s letter had “served as a block on scrutiny.”

“Some authorities have treated this as a blanket ban to turn down legitimate FOIs on this subject,” said Peter Apps from the End Our National Cladding Scandal campaign.

“I have had requests for the name of the company which signed off a building as safe, or the identity of companies receiving public money to remediate their tower blocks withheld on this basis – despite neither posing any risk of identification of the buildings involved.”

Giles Grover from End our Cladding Scandal said: “It is astounding that the Government still seems to be choosing to hide important information, which is clearly in the public interest, by issuing this blanket instruction.

It is now over three and a half years since Grenfell and the Government must accept the need for full transparency. Millions of residents simply want the Government, which is supposed to represent us, to be honest.”

As well as the 2017 letter, the housing ministry has given councils written advice to reject FOI requests relating to cladding by using an exemption which means the government does intend to publish the information. However, the government has yet to publish a full list of high-rise buildings with aluminium composite.

According to the latest government data release, at the end of December 2020, 90% of all identified high-rise residential and publicly owned buildings in England had either completed or started remediation work to remove and replace unsafe ACM cladding. 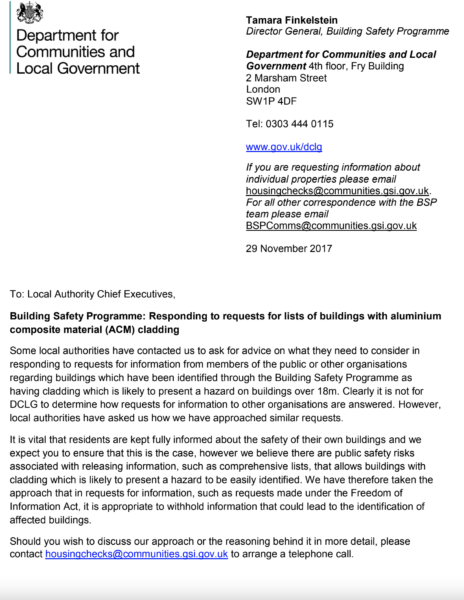 An inquiry into the Grenfell fire has established that plastic-filled aluminium cladding panels used to wrap the high-rise block during its refurbishment were the primary cause of the blaze’s rapid spread. Many blamed pressure from the block’s landlords to cut costs.

The Grenfell fire and its aftermath sparked debate about the treatment of Black and Asian Communities, who are far more likely to live in London’s social housing.

The on-going inquiry has been dogged by questions about access to documents. The Royal Borough of Kensington and Chelsea failed to respond at all to a series of FOI requests received in the days after the fire in June 2017.

FOI requests about high-rise buildings with ACM have also been refused on the grounds that identification could make them the target for terrorist attacks.

In 2019, the FOI regulator, the Information Commissioner’s Office, upheld the housing department’s policy of not revealing the identity of high-rise residential buildings with unsafe cladding systems on public safety grounds.

But Freedom of Information experts believe that, more than three and a half years on from the Grenfell fire, claims that information cannot be made public because high rise buildings might be attacked do not stand up to scrutiny.

“The circumstances have changed in the three years since the letter was sent to local authorities,” said Katherine Gunderson of the campaign for Freedom of Information.

“An important question is whether the [housing ministry] is correct to say that all tenants in affected buildings have been informed by their landlords. Is there good evidence that this is true? If it’s not, any policy of withholding lists would be indefensible.”

At the time of publication, both the Ministry of Housing, Communities and Local Government and Hounslow council declined to comment.