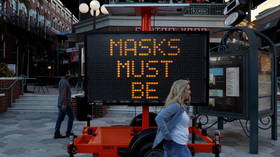 It’s not easy to keep an entire population at the brink of hysteria, but the supposed figures of authority in this pandemic are doing a pretty good job, with flip-flops that almost seem designed to keep us confused and scared.

It took just a few days for US coronavirus czar Dr. Anthony Fauci to change his tune regarding multi-masking, the trendy if bizarre practice of wearing more than one face covering at the same time in an effort to avoid infection with coronavirus. Fauci initially came out in support of the practice, touting it as “common sense” given the supposedly super-contagious new strain of Covid-19 on the loose.

However, the health official admitted a scarce few days after that “there’s no data that indicates that that [double-masking] is going to make a difference and that is the reason why the CDC has not changed its recommendation.”

This particular issue may have sprung from a CNBC reporter’s innocent misreading of a research paper suggesting triple-layer masks might show some superiority over single-layer face coverings – but even that conclusion was based on a hypothesis, rather than an actual study.

Everyone has the right to make mistakes, but with Covid-19, it’s become more than a little obvious that all the ‘fails’ err on the side of inflating the threat. Indeed, when good news comes out of any corner opposed to lockdowns or committing economic suicide, many outlets won’t even touch it. Nor do any of the self-appointed scolds ever admit that no matter how many masks a person wears over their nose and mouth, the virus could still get in through the eyes and ears.

Fauci arguably kicked the whole mask drama off when he flip-flopped back in May from reassuring Americans that they didn’t need masks (though healthcare providers did) to insisting not wearing a mask was like personally throwing Grandma in a gas chamber. He went on to flip-flop about how many Americans would have to take the vaccine in order to achieve herd immunity, hiking the number from 70 percent to 85 percent, while admitting he didn’t want to spook the half of Americans who had at first said they didn’t want the jab. As usual, it was all supposed to be for Americans’ own good. Anyone not grateful for being lied to was clearly an ungrateful wretch that did not deserve Fauci’s benevolence.

It’s not just Fauci, of course. New York Governor Andrew Cuomo has singled himself out as one of the most notorious flip-floppers, starting with “all nursing homes must permit patients discharged from Covid-19 hospitalization to return to their facilities” (March) – only to blame the subsequent tens of thousands of care home deaths on the homes themselves for not standing up to his edict (May). After ordering New Yorkers not to travel for Thanksgiving (or eat with too many people), he gloated about how he was going to travel to spend the holiday with his mom and family, but then retracted his plans, leaving New Yorkers to wonder if it really was safe to travel after all.

Now, after long insisting New York City could never reopen its beloved restaurants and bars until everyone had been vaccinated, he’s done another flip-flop and announced indoor dining will come back on Valentine’s Day. And after telling restaurant workers to go to the back of the queue for vaccines, he changed his mind earlier this week. Governance by public pressure is fine, but it shouldn’t be mistaken for science.

Indeed, one might think that after a year of conflicting mask orders, data showing no correlation between mandatory masking and Covid-19 cases, perpetually shifting and politically-tailored ‘science’, actual professionals could agree on some general best practices. Instead, for every study insisting masks are the magic bullet they’re touted as, there’s another stating the opposite – and some websites have taken it upon themselves to start deleting the latter. The issue has been hopelessly politicized – almost as if the aim were to keep Americans lost and confused rather than informed.

Few know, for example, that World Economic Forum founder Klaus Schwab has publicly admitted that Covid-19 doesn’t “pose an existential threat” like “certain past epidemics,” or that the Bulletin of Atomic Scientists doesn’t consider the pandemic nearly as dangerous as rumors about the pandemic.

But then, why bother giving people the information that will help them face the outside world with confidence when it’s so much easier to keep them inside, quivering with fear, with their eyes glued to the screen as they try to make up their mind on whether they can truly be safe anywhere. (Spoiler alert, straight from the mouth of Cuomo: no way!).

In the words of former CIA director William Casey, “We’ll know our disinformation program is complete when everything the American public believes is false.”