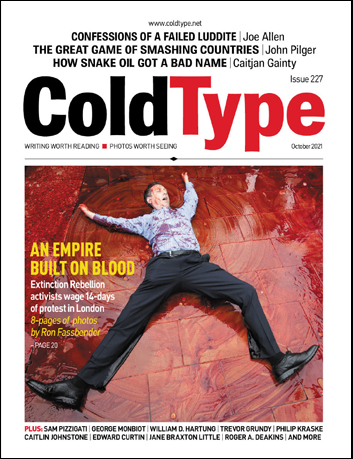 Welcome to the October issue of ColdType, which is highlighted by Ron Fassbender’s 8-page photo story on the Extinction Rebellion activists who waged 14-days of global warming protests in London. Joe Allen shares his confessions of a failed Luddite, John Pilger tells of the West’s Great Game of smashing countries, Joan Braxton Little explains how she became a climate refugee, and William D. Hartung reveals how US corporations won the War on Terror.

In other stories, Philip Kraske asks why mainstream journalists hate 9/11 Truthers, Caitlin Johnstone shows how Australia’s submarine deal is hurtling the country to calamity, Trevor Grundy tells of the island nation that is cutting links with the UK’s Royal Family, Edward Curtin writes on the bewitchment of propaganda, and Oscar-winner Roger A. Deakins shows some of his personal photographs.