An author for the HuffPost has written a way too long screed on Biden’s perceived lack of action against the Saudi clown prince Mohammed bin Salman.

NEW: 9 months into the Biden era, the Khashoggi file is “lost” & Saudi Arabia is getting > $1 billion in new weapons. Here’s the story of how Biden betrayed Democrats in Congress & fumbled the best chance for accountability for MBS’s human rights abuses.

Joe Biden Promised To Take On Saudi Arabia Over Jamal Khashoggi. The Saudis Won.
Biden pledged to root his foreign policy in values like human rights, but didn’t apply that standard to the long and morally dubious U.S.–Saudi relationship.

I find the piece delusional:

As president, Biden started off by making good on campaign promises about Saudi Arabia.
…
Then, in February, Biden unveiled what he described as his Khashoggi policy.

It contained no sanctions for the prince and no details on what evidence American officials used to identify him as responsible. It punished only low-level Saudis without naming most of those who would be affected.
…
The Washington Post, Khashoggi’s last employer, slammed Biden. The president “let the murderer walk,” wrote Nicholas Kristof of The New York Times.
…
Three weeks after Biden pledged to root his foreign policy in values like human rights, he showed he did not apply that standard to America’s long and morally dubious relationship with Saudi Arabia.

Here is news for Akbar Shahid Ahmed. International relations are never about values or human rights. They are about interests.

It is not in the U.S. interests, nor in Biden’s personal ones, to further worsen the relations with Saudi Arabia.

Biden has sound reasons to hold back on bothering the clown prince. One is that the Saudis are a major reason for the predominance of the U.S.-dollar in the global financial system. If they were to decide to sell oil in Chinese Yuan the U.S. dollar would no longer be the main reserve currency. The U.S. taxpayers would actually have to pay for their government’s deficits. (The chance for this is low as the U.S. would probably rather invade Saudi Arabia than let that happen.)

It is Saudi Arabia that has the most available capacity to pump oil beyond the current production rate. And it is here where MbS has direct power over the U.S. 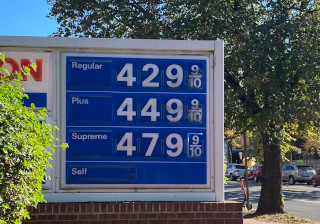 With gas prices at their current height and still rising it is no wonder that Biden’s approval rating is down to 38% and that the Democrats are likely to lose in the midterm elections.

Last week the Biden administration tried to pressure Saudi Arabia and Russia into pumping more oil. Either said: “No!”

OPEC and allied oil-producing countries rebuffed pressure from U.S. President Joe Biden to pump significantly more oil and lower gasoline prices for American drivers, deciding Thursday to stick with their plan for cautious monthly increases even as prices surge and the global economy is thirsty for fuel.
…
That hasn’t gone down well with Biden, who has made repeated calls to pump more oil. The U.S. used the Group of 20 summit last weekend in Rome to consult with other oil-consuming countries on how to exert influence over the producing countries and what they might do if the Saudis and Russians continue to hold back.

The OPEC+ decision came on the same day as the Biden administration’s approval for new weapon sales to Saudi Arabia. That ‘bribe’ was either late or did not work.

As Biden continues to shun the clown prince for murdering the Brotherhood propagandist Jamal Kashoggi there is no incentive for him to help Joe Biden by pumping more oil.

The Financial Times notes that Washington is well aware of this:

[T]he suspicion is that the reluctance to bow to US pressure is not solely related to market dynamics as Riyadh continues to smart over Biden’s coolness towards Crown Prince Mohammed bin Salman.

“There’s a clear view in Washington that this is probably more than just about oil, that Prince Mohammed is annoyed Biden hasn’t called him personally, hasn’t shown him enough respect and wants greater recognition before he becomes king,” one energy analyst said.
…
Now, with US petrol prices having risen about 40 per cent since Biden’s inauguration, Prince Mohammed controls a lever that has the power to help or hinder the White House. As the president’s frustration highlights, despite the US markedly reducing its dependence on Gulf crude over the past decade and a creeping disengagement from the Middle East, it’s not immune from global market forces. And Saudi Arabia is the key player.

So called ‘values’ and various ‘moral outrages’ may sound good on the campaign trail. But they do not help when one has to pursue a realistic foreign policy.