News, analysis and commentary from the black left 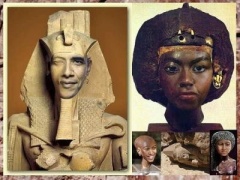 The New Black Politics: All We Want Is A Black Royal Family, Not Jobs, Peace, or Justice

by BAR Managing Editor Bruce A. Dixon
With record black unemployment, unjust wars and torture continuing, it’s time to ask, Can we let a black pharoah go? The historical African American legacy as the most progressive-minded constituency in the U.S. seems to have hit a royalist snag in the Age of Obama. “Four years after declaring himself “Joshua” to Dr. King’s Moses, our first black president resembles Pharoah more than anybody else.”

by BAR editor and senior columnist Margaret Kimberley
The “Father” of the nation was also one of the godfathers of the human bondage mafia, “among the quarter of American presidents who were slave holders.” George Washington and his wife were as cynical and devious as any other slaveholders in preventing their human capital from tasting freedom. The heroes and heroines of Washington’s household are the ones that got away.

•
African Americans and Egyptians: A Comparison

A Black Agenda Radio commentary by Glen Ford
“Many Black Americans expressed deep admiration, bordering on envy, for the Egyptians they saw on television.” There’s nothing strange about that; African Americans have often identified with other peoples of color that oppose domination by U.S.-backed regimes. But African American nationalism today leads Blacks to support a Black president who is hostile to their interests, while nationalism in Egypt helped fuel revolt against an Arab dictator who sold out his people.

A Black Agenda Radio commentary by BAR editor and columnist Jared A. Ball
If you don’t understand race, you know nothing about the United States. The catastrophes that descend on Black America must be seen “as a violent result of an ideology which results in economic and social policies predetermined to this effect.” Even the best off African Americans can’t save themselves. “The nation’s richest Black community, Prince George’s County, Maryland, is also home to the highest Black foreclosure rate.”

A Black Agenda Radio commentary by Glen Ford
The 2012 Obama budget should have caught no one off guard. Obama told everyone in earshot how much he admired President Reagan, so “why be surprised when you get a Reagan-type budget?” Obama’s assault on poor and working people’s programs collides with the historical Black consensus around issues of social justice. At some point there will be a reckoning.

by Kevin Alexander Gray
The 2012 budget proposal looks like it arrived straight from GOP headquarters, but it’s signed “Barack Obama.” The First Black President “seems totally willing ‘to drop the blade'” on many of the Democrats’ core constituent programs “instead of giving Republicans the pleasure.” Virtually every federal program designed to serve the poor and working class has been savaged, preemptively, by Obama’s own hand.

by David Swanson
Continuity of corporate rule from Republican to Democratic administrations is a hard, cold fact – as cold as the houses of the poor will be if President Obama gets his way. Obama is seeking to cut in half the same federal home heating program that George Bush failed to slash back in 2003. “Bush believed that those who worked for a living should go on being taxed even if they had to freeze.” ACORN stopped Bush, but who is there to stop Obama?

by Earl Picard, Ph.D.
Whatever occurred in Egypt last week, it is incomplete. “Some say the established order in the ‘Arab World’ has been upended,” writes the author. “I say that it is too early to tell.” The one fact that is certain is that the military remains in charge, as it has been for the past 60 years. “The military has overthrown itself, and replaced itself with itself.”

•
Egypt’s Uprising: Not Just a Question of “Transition”

by Adam Hanieh
No sooner had Hosni Mubarak been pushed aside than the corporate media began busily minimizing the goals of the Egyptian people’s revolt. It was all about one man’s crimes, they said, requiring only some “democratic” adjustments to make the “transition” to a system that Washington and London could love. But “class remains the key dynamic to understanding any social transformation,” in Arab lands as elsewhere. “The result of neoliberalism was the enrichment of a tiny elite concurrent with the immiseration of the vast majority.”

•
Tshombe, Spain and the DRC’s Independence

by Agustín Velloso
There is only one top imperialist: the United States. But within the imperial orbit there are greater and lesser national players, who act as “handlers” to individuals that are useful to the imperial project. Joseph Mobutu was one such individual. So was Moise Tshombe, who sometimes passed through Spain’s hands during the bloody contest for control of the Democratic Republic of Congo. “Spain’s support isn’t for Tshombe and Mobutu in the main, but for US imperialism, which finally decides to bet on Mobutu amongst the contenders for power in the DRC.”

•
Listen to Black Agenda Radio on the Progressive Radio Network, with Glen Ford and Nellie Bailey

Former Haitian President Aristide Coming Back Soon
That’s the prediction from Mark Weisbrot, of the Center for Economic and Policy Research. “The majority of this hemisphere is ruled by Left governments,” says Weisbrot, “and these governments have a very different attitude towards national sovereignty and towards this kind of interference” by the United States, which backed Jean-Bertrand Aristide’s overthrow and exile in 2004. Weisbrot believes Washington allowed the recent return to Haiti of former dictator Jean Claude “Baby Doc” Duvalier “in order to build up a right wing presence in the country.”
Bush and Obama Educational Policies are Alike
“When you look at the education agenda from the perspective…of the Bush administration, you note that the Obama agenda is not that much different,” says Nathan Sanders, president of the Washington (DC) Teachers Union. “The changes are not drastically different, and possibly the old regime is now the new regime.” Sanders says private school vouchers and Obama’s Race to the Top program are part of a “corporate agenda” that is “interested in privatizing a large group of dollars in public education.”
If Only ACORN Had Survived…
President Obama is proposing to cut in half federal home heating assistance to the poor, the same program that President Bush unsuccessfully attempted to decimate in 2003. What stymied Bush seven years ago “was ACORN, and nothing but ACORN,” says David Swanson, former communications coordinator of the mass poor people’s organization that was forced to disband last year. “If ACORN was still around, Obama would not be able to do what he is proposing,” says Swanson, publisher of the influential web site War Is A Crime.
NAACP Legal Defense Fund retained by Mumia Abu Jamal Defense
The LDF will immediately assist in upcoming arguments over Abu Jamal’s death sentence in the 1981 killing of a Philadelphia policeman. “We’re going to examine this case from front to back,” says Christina Swarms, head of the LDF’s Criminal Justice Project.
Social Security Has Nothing To Do With Deficit
“Social Security is not contributing to the federal deficit,” says Virginia Reno, vice president of the National Academy of Social Insurance. “It has collected more in money since it began in 1933 than it’s paid out. It now has reserves of about $2.6 trillion.”
Dr. Jared Ball: U.S. Left Would Not Back African America Revolt
“Would the Left in this country really support a Black American uprising like the one they are supporting in Egypt?” asks BAR columnist Dr. Jared Ball. “I am doubtful.”