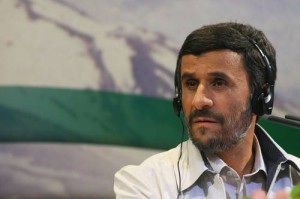 First, a simple rule: utter absurdity in allegations leveled by the US government is no bar to a deferential hearing in our nation’s major conduits of official opinion.   Suppose the CIA leaks a secret national security review concluding that the moon is actually made of cheese, and the Chinese are planning to send up a pair of gigantic bio-engineered rats to breed in numbers sufficient to eat the cheese and thus sabotage US plans for Missile Defense radar deployment on the moon’s dark side. LEFT: Iran’s president Ahmadinejad

The headlines will initially proclaim ‘Doubts on Chinese Rat Threat Widespread. Many scoff.’  The lead paragraphs in news stories in the New York Times, Washington Post and Wall Street Journal will quote the scoffers, but then ‘balance’ will mandate respectful quotation from ‘intelligence sources’, faculty professors, think tank ‘experts’ and the like, all eager to dance to the government’s tune: ‘Many say ‘rat  scenario ‘plausible’’ etc etc. Lo and behold, by the end of a couple of days of such news stories, the Chinese rat plot is firmly ensconced as a  credible proposition. News reports  then turn to respectful discussion of the US government’s options in confronting and routing the Chinese rat threat: ‘Vice President says ‘all options are on the table’ etc.  For verification, merely study the news stories  about the Iranian ‘plot’ in the major papers across the past three days.

Even by the forgiving standards of American credulity, the supposed Iranian plot to assassinate the Saudi Ambassador to the US is spectacularly ludicrous. Why would Iran want to kill the Saudi envoy –  the mild-mannered functionary, Adel al-Jubeir? I could understand an inclination  to dispose of the irksome Prince Bandar who held the job for 22 years, from 1983 to 2005  – simply in the spirit of ‘change’. But to  kill any ambassador – particularly a Saudi ambassador – is to invite lethal retaliation, even war. Iran doesn’t want war with the US.

Manssor J. Arbabsiar, an Iranian-American used car salesman from Corpus Christi, Texas, has been indicted as the chief conspirator working for Iranian intelligence. He is charged with promising to pay $1.5 million to Los Zetas – one of the Mexican drug cartels – to kill the Saudi ambassador at a restaurant in Washington.

The FBI claims that Arbabsiar told the Drug Enforcement Agency’s informant – posing as a high-ranking member of Los Zetas – that it would be ‘no big deal’ if many others died at the restaurant, possibly including United States senators. He also proposed bombing the Israeli embassy.

If even one US senator died in a terrorist bombing in Washington, if anything larger than a firecracker detonated outside the Israeli embassy, US bombers would be raining high explosive on Iranian targets within 24 hours. Why would Iran want to invite such a response?

Gareth Porter points out on our site this weekend that the whole ‘plot’ has the familiar aroma of an FBI sting in which the most outlandish propositions are actually voiced by the DEA informant to Arbabsiar. The supposed plot is certainly wreathed in incidental grandiose absurdities: a side deal between the Quds Force, part of Iran’s Islamic Revolutionary Guards Corps (IRGC), and Los Zetas to smuggle vast shipments of opium from the Middle East to Mexico, and plans to bomb the Saudi and Israeli Embassies in Argentina.

To repeat: Iran doesn’t want war with the US. Quite the reverse. President Mahmoud Ahmadinejad recently tried to refloat the Tehran Research Reactor nuclear fuel swap. He proposed that Iran suspend production of some uranium-enrichment activities in exchange for fuel supplies from the United States. On September 29 the International Herald Tribune ran an op-ed piece saying the proposal was well worth consideration by the US government. All such hopes of a warming in relations have now been snuffed out, most vigorously by Obama on Thursday, endorsing the Attorney General Holder’s  wild allegations and threatening ferocious new sanctions against Iran.

There are two powers in the Middle East that most certainly do want war, or a deepening rift between the US and Iran – namely Saudi Arabia and Israel. And we should not forget the  cultish Iranian MEK, beloved by many on Capitol Hill.

Iranian intelligence is famously efficient at hiding its tracks. Though many believe that it was the Iranians who blew up PanAm flight 103 in 1988 – in retaliation for the downing of an Iranian civilian airliner by the US Navy ship, the Vincennes – no convincing trail has ever come to light. Yet it is supposedly Iranian intelligence that wired $100,000 to the used car salesman, using a known Quds bank account.If the bid was a false flag operation mounted by the Saudis or Israelis, an open transfer of money would be one obvious tactic.

The US has made swift use of dubious ‘plots’ in the not-so-distant past. In 1981 it flourished charges of a Libyan ‘hit squad’ entering the US through the border tunnel between the Canadian town of Windsor to Detroit, with a plan to assassinate newly elected President Ronald Reagan. No evidence was ever offered for this accusation but it kindled animosities that culminated five years later with the US raid on Tripoli, aiming to assassinate Col Gaddafi in his compound.

In April 1993 former president G.H.W. Bush  was visiting Kuwait to commemorate the victory over Saddam in the Gulf War. Detection by the Kuwaitis of a plot to kill him with a car bomb was announced. The FBI duly declared that the wiring of the bomb  indicated that the bomb-makers belonged to Iraqi intelligence.

In June 1993 Madeleine Albright, US ambassador to the UN, denounced the plot in the Security Council and a day later President Clinton ordered the firing of 23 Tomahawk cruise missiles at the HQ of Iraqi intelligence in Baghdad. One of the missiles landed in a Baghdad suburb and killed Layla al-Attar, one of Iraq’s leading artists. This set the tone for relations during the Clinton years.

There have also been some spectacular cases of gullibility on the part of supposedly seasoned US intelligence operatives and high military commanders.

A year ago General Petraeus and the US high command in Afghanistan placed great confidence in Mullah Akhtar Muhammad Mansour, allegedly a senior Taliban commander empowered to make peace proposals. The US negotiators and Afghan officials were initially suspicious of Mansour’s credentials but their doubts soon melted. According to a New York Times report, ‘Several steps were taken to establish the man’s real identity; after the first meeting, photos of him were shown to Taliban detainees who were believed to know Mr. Mansour. They signed off, the Afghan leader said.’

It turned out that Mansour, given quite large sums of money by the Americans, was a freelance impostor. Note that in the case of the Iranian plot, the FBI says that Manssor J. Arbabsiar correctly identified a known Quds Force officer from a photo array.

The question is why the US government should nail its colors so firmly to the mast of this purported Iranian assassination plot. On two other occasions the US made passionate commitments at the UN to concocted evidence – with both used as levers to launch wars.

The first was US Secretary of State Colin Powell’s unveiling to the UN in February of 2003 of the infamous dossier of entirely bogus evidence that Iraq had a huge arsenal of weapons of mass destruction. The second was the allegation by Secretary of State Hillary Clinton, and US ambassador to the UN Susan Rice, in February of this year, that Gaddafi was committing crimes against humanity up to and including genocide against his own people – charges decisively refuted by Amnesty International and Human Rights Watch.

Absurdity, as noted above,  is not a decisive factor. Once the DOJ launched its Complaint, the accusations are official and immune to reasoned demolition. Iran doesn’t want war with the US. But how far will the US go in its response, led as it is by a weak president entirely committed to using the ‘war on terror’ to buttress his bid for reelection.

Alexander Cockburn can be reached at alexandercockburn@asis.com