If Trump is a Fascist, What is Clinton?

Speaking to a gathering of the Georgia Peace and Justice Coalition, in Atlanta, Black Agenda Report executive editor Glen Ford challenged those who maintain that progressives are obligated to support Hillary Clinton for president to counter a “fascist” threat from Donald Trump. “I’d like to know how Donald Trump is supposed to build fascism when the ruling class is mostly with the Democrats this election season,” said Ford. “If you are worried about 21st century fascism, you need to check out the tent where the ruling class congregates — and that’s Hillary’s tent. Most of all, if you’re looking for fascists, go to the sound of the war drums” — which are also pounding in Hillary’s tent. For voters that are looking for a real anti-fascist and pro-peace presidential ticket, the only choice on the ballot in most states is Jill Stein and Ajamu Baraka, of the Green Party, said Ford.

END_OF_DOCUMENT_TOKEN_TO_BE_REPLACED

Amy Goodman announcing the dismissal of charges against her outside the Morton County Courthouse in Mandan, North Dakota (Democracy Now!, 10/17/16).

North Dakota District Judge John Grinsteiner stood up for the First Amendment by dismissing “riot” charges against Democracy Now!’s Amy Goodman (Democracy Now!, 10/17/16). That’s more than you can say for most of Goodman’s corporate media colleagues.

END_OF_DOCUMENT_TOKEN_TO_BE_REPLACED 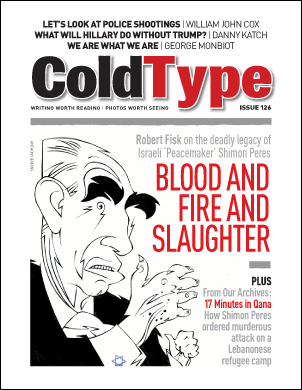