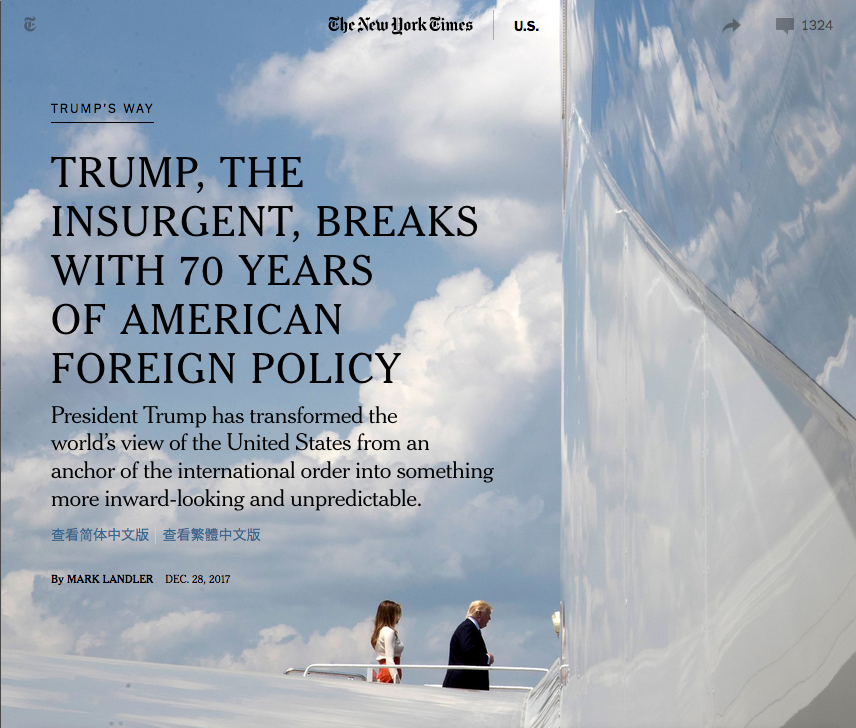 The New York Times reports that Donald Trump “holds a radically different view of the United States’ role in the world than most of his predecessors,” citing his lack of interest in “the rules-based postwar international order.”

Trumpwashing—defined as whitewashing, obscuring or rewriting the broader US record by presenting Donald Trump as an aberration (FAIR.org, 6/3/16)—was on full display Thursday in a nominally straight news report from the New York Times’ Mark Landler (12/28/17) on how Trump has reshaped US foreign policy. Buried in the otherwise banal analysis was this gem of US imperial agitprop:

Above all, Mr. Trump has transformed the world’s view of the United States from a reliable anchor of the liberal, rules-based international order into something more inward-looking and unpredictable. That is a seminal change from the role the country has played for 70 years, under presidents from both parties, and it has lasting implications for how other countries chart their futures.

There’s lots of ideology to unpack here, but let’s start with the empirically false assertion that the “world” viewed the United States as a “reliable anchor of the liberal, rules-based international order.” Poll (Guardian, 6/15/06) after poll (Pew, 3/14/07) after poll (PRI, 1/3/14) throughout the years has shown that much of the world views the United States as threat to peace, often taking the top spot as the single greatest threat. What evidence Landler has for the world viewing the US as a sort of good-natured global babysitter is unclear, as he cites nothing to support this hugely important claim (since if Trump’s cynical disregard for “human rights” is nothing new, then there’s no real story here). It’s just thrown out with the assumption the Times readership is sufficiently nationalistic and/or amnesiac to either not notice or not care. It’s designed to flatter, not to elucidate. 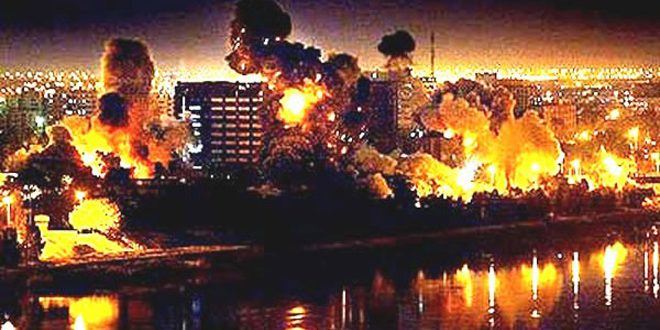 The US invasion of Iraq in defiance of international rules.

The second dubious assertion is the idea that the US is “viewed” as being (or, by implication, objectively is) concerned with “liberal, rules-based international order.” Perhaps Landler missed the part where the US runs offshore penal colonies for untried political prisoners, and a decade-long drone war that’s killed thousands—both entirely outside the scope of international law. Or the time the US invaded and destroyed Iraq without any international authorization, killing hundreds of thousands. Or perhaps he missed the part where the United States refuses to sign “liberal, rules-based international order” treaties such as the International Criminal Court or the ban on bombs and or a prohibition on nuclear weapons. Or the part where the US not only doesn’t recognize the International Criminal Court, but has a law on its books (dubbed “the Hague Invasion Act,” passed in 2002) that if an American is ever held by the ICC for committing war crimes, the US is obligated to literally invade the Hague and free them.

And this is just in the past 15 years. Landler, even more laughably, starts the clock in 1947, which would include dozens of non-“liberal,” non-“rules-based” coups, invasions, bombing campaigns, assassinations, extrajudicial murders and so forth. The number of actions carried out by the US not sanctioned by even the thinnest pretext of “international order” is too long to list.

What exactly is this “liberal, rules-based international order,” and when did “the world” view the United States as its most reliable anchor? Landler doesn’t say, he simply asserts this highly contestable and ideological claim, and moves on to pearl-clutch about Trump ruining the US’s hard-won moral authority. He has some 100 percent uncut pro-US ideology to push under the guise of criticizing Trump, and no amount of basic historical facts will get in his way.

You can send a message to the New York Times at letters@nytimes.com (Twitter: @NYTimes). Please remember that respectful communication is the most effective.