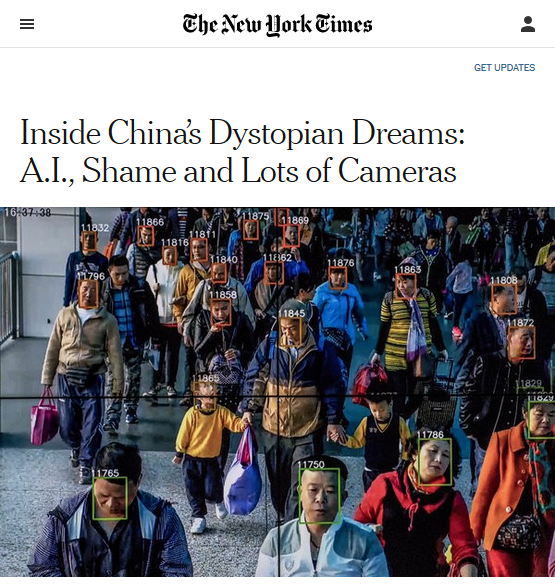 In China, the New York Times (7/8/18) sees facial recognition as a sign of dystopia; in the West, the Times(7/9/18) reports on Amazon‘s promotion of the same technology as a “reputational risk.”

There’s a category of story we call “Them Not Us”—US media reporting on problems abroad, and seemingly not noticing that they have the same problems at home. There’s a great example of that in the New York Times (7/8/18), headlined “Inside China’s Dystopian Dreams: AI, Shame and Lots of Cameras.”

Beijing is embracing technologies like facial recognition and artificial intelligence to identify and track 1.4 billion people. It wants to assemble a vast and unprecedented national surveillance system, with crucial help from its thriving technology industry.

Is it really so unprecedented, though? The US National Security Agency in 2011 describedits “New Collection Posture” toward global electronic communication as “Know It All…Collect It All…Process It All…Exploit It All.” Hard to get much vaster than that, isn’t it?

As for embracing technologies like facial recognition with crucial help from a thriving technology industry, here’s a headline from the Guardian (7/6/18) that came out two days before the Times piece:

Thanks to Amazon, the Government Will Soon Be Able to Track Your Face

On license plate readers, these are sort of ubiquitous. In the past decade, they really have been set up in probably the majority of cities and counties in the US. And they take a photograph of the front of a car—they’re usually pole-mounted on traffic lights—as it goes by. And, essentially, if you are one of those people who happens to drive back and forth, every single day, past one of these, it can geolocate you in time and space, based on your license plate, on a fairly regular basis. 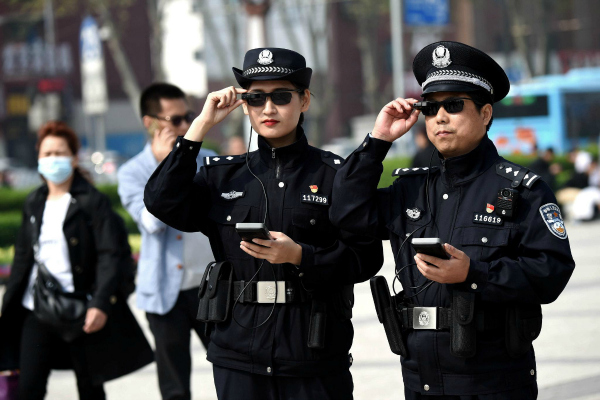 The New York Times depicts Chinese police with “AI-powered smart glasses.” Meanwhile, in the US, “Police Departments Have Their Eye on Google Glass” (USA Today, 2/12/14) is a four-year-old story.

The Times article on China reports,  “Invasive mass-surveillance software has been set up in the west to track members of the Uighur Muslim minority and map their relations with friends and family, according to software viewed by the New York Times.” Has the Times viewed the software contract that Reuters Thompson—parent company of the Reuters news agency—signed with ICE? This software will:

Or Mozur could just read back issues of his own paper, like a nearly five-year-old piece by James Risen and Laura Poitras (9/28/13) that started off:

Since 2010, the National Security Agency has been exploiting its huge collections of data to create sophisticated graphs of some Americans’ social connections that can identify their associates, their locations at certain times, their traveling companions and other personal information, according to newly disclosed documents and interviews with officials.

The China piece does have a couple of acknowledgements that these issues are not totally foreign to the United States. At one point it notes: “Already, China has an estimated 200 million surveillance cameras — four times as many as the United States.” Not noted: China has a bit more than four times the population of the United States. At another point, it mentions that the US director of national intelligence held an “open contest for facial recognition algorithms” in 2017—which a Chinese company won. But you won’t likely see New York Times headlines about the “dystopian dreams” of the US surveillance state.

In an indication that surveillance isn’t the only area where the Times has the ability to report on woes in other countries without recognizing that its own country has troubles that are similar or worse, the article describes the impetus behind China’s population-monitoring drive: “China’s economy isn’t growing at the same pace. It suffers from a severe wealth gap.”

As it happens, by the standard measure of inequality, the GINI coefficient, the US and China are almost exactly as unequal—41 vs. 42.2, according to the World Bank—and China’s GDP is growing almost twice as fast. Would the New York Times ever cite the US’s wealth gap and slowing growth as an explanation for the expansion of the NSA’s powers?

Please encourage the New York Times to use the same standards when reporting on problems in its own country as abroad. You can send a message to the Times at letters@nytimes.com (or via Twitter:@NYTimes). Please remember that respectful communication is the most effective.